In iOS 8, Apple is adding some new Core Location features that let app developers get precise indoor positioning data from an iOS device’s sensors and it’s even letting venues contribute by signing-up to get help enabling indoor positioning. We first exclusively detailed the new feature last year, which taps into the iPhone’s M7 processor and uses WiFi technologies to provide extremely accurate indoor mapping and navigation features to developers.

Up until now, CoreLocation has been using a combination of Cellular, GPS, and WiFi technology in order to provide developers with location information from their users. Those technologies can get you within a city block or in some cases close to or inside a venue, but they aren’t enough to provide accurate positioning indoors or features like indoor navigation. That’s why with iOS 8, Apple is introducing new features for the CoreLocation API that will let developers tap into an iPhone’s M7 processor and motion sensors in order to get accurate indoor location, navigation, and floor numbers. 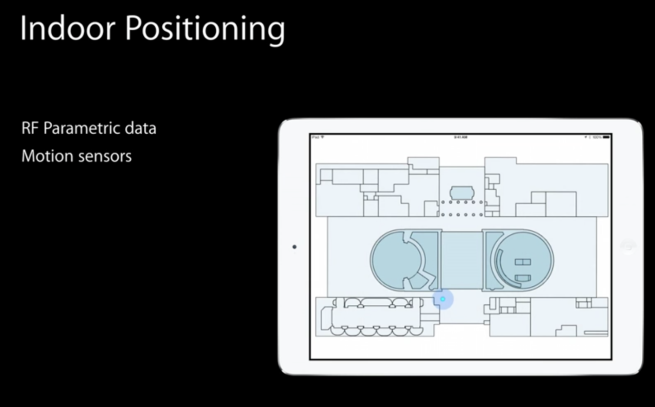 In iOS 8, Apple will still be using Cellular, GPS, and WiFi to get you to the venue, but once you’re approaching a location that is enabled for indoor positioning, it will scan over wifi, tap into the device’s sensors like the M7 chip and provide accurate data of exactly where you are and how fast you’re moving through the floor plan. Once indoor positioning kicks in, Apple turns down the GPS chip in the device in order to conserve power. The feature requires WiFi, an unlocked device, and will rely on RF parametric data from the venues in addition to the device’s sensors.

It’s making all of the data available to developers through the same CoreLocation API and apps already requesting best accuracy for location will automatically start seeing improved indoor positioning. iOS 8 also adds the ability to display floor number to the CoreLocation API. In one example, imagine an app that lets you order a drink at a venue and have staff find your exact location even if you’re moving throughout the area on multiple floors.

Last year Apple bought WiFi Slam, a company that uses similar WiFi technology to pinpoint the location of devices indoors. It’s unclear if that technology is being used as part of Apple’s new feature in iOS 8, but Apple is using similar techniques to aggressively scan for WiFi signals. Apple has also recently hired talent away from other indoor positioning companies like Wifarer.

Apple is hoping that the new indoor positioning features will help compliment iBeacon Bluetooth LE technology that many retailers, event venues, and others have embraced since first announced with iOS 7. In addition to letting venues prompt users to download their app on the home screen (a revamped App Store Near Me feature that’s integrated into Continuity in iOS 8), developers building unique indoor navigation experiences could tap into iBeacons to enhance the experience. For example, an indoor navigation app could guide users to points of interest (iBeacons) at a venue like a museum.

The indoor positioning features have already been enabled at three venues that we know of including the California Academy of Sciences in San Francisco, the Westfield San Francisco Centre, and the Mineta San Jose International Airport. Apple expects to add many more venues in the coming months as more property owners signup to enable the technology. Interested venues can sign-up through Apple’s iOS developer channels and get assistance with the process. It’s unclear exactly what venues will have to provide to Apple, but the company did say it relies on RF parametric data and asks for floor plans in various file types.

An upcoming seed of the iOS 8 developer build will enable the indoor location features for developers and provide sample code.