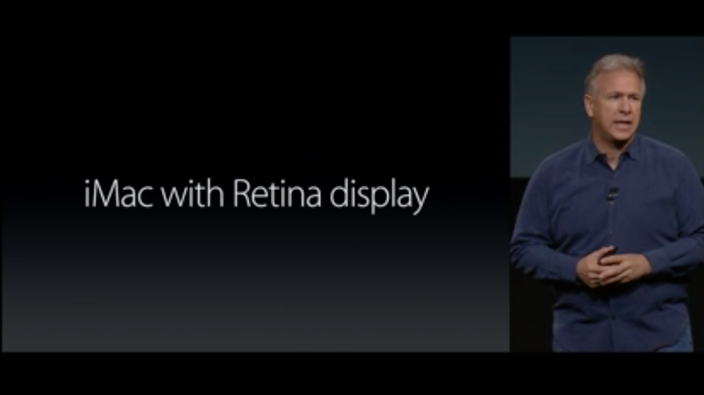 Apple has just announced a brand-new Retina 27-inch iMac. Apple is spreading Retina displays across the lineup, with the iMac leading that charge. This is the highest resolution screen in the world, according to Apple, with 14.7 million pixels. This is a 5K display — more than seven times the pixels of a HDTV. The screen builds on the technology Apple built on the iPhone and iPad, but to a whole new scale.

The iMac is just 5mm at its thinnest point, maintaining the same thinness as the previous generation, despite the massive leap in pixel density. 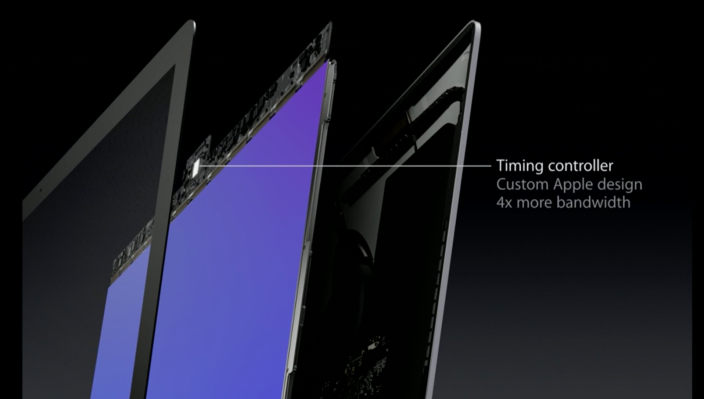 Alongside resolution, the display has a greater contrast ratio to maximize detail. Meanwhile, Apple uses power-saving LEDS which decreases power use by 30%.

It also includes the fastest CPU chips, upgradeable to a 4 GHZ Intel Core i7. In terms of graphics, the iMac is 45% faster than the previous version. It also includes a Thunderbolt 2 port for faster IO.

This iMac will start at just $2499, shipping today.

CUPERTINO, California—October 16, 2014—Apple® today unveiled the 27-inch iMac® with Retina® 5K display, featuring the world’s highest resolution display with a breathtaking 14.7 million pixels. At this amazing resolution, text appears sharper than ever, videos are unbelievably lifelike, and you can see new levels of detail in your photos. With the latest quad-core processors, high-performance graphics, Fusion Drive and Thunderbolt 2, iMac with Retina 5K display is the most powerful iMac ever made—it’s the ultimate display combined with the ultimate all-in-one.

“Thirty years after the first Mac changed the world, the new iMac with Retina 5K display running OS X Yosemite is the most insanely great Mac we have ever made,” said Philip Schiller, Apple’s senior vice president of Worldwide Marketing. “With a breathtaking 14.7 million pixel display, faster CPU and graphics, Fusion Drive, and Thunderbolt 2, it’s the most beautiful and powerful iMac ever.”

iMac with Retina 5K display delivers an amazingly immersive user experience. With a resolution of 5120 x 2880, iMac with Retina 5K display has four times more pixels than the standard 27-inch iMac and 67 percent more pixels than a 4K display. Text looks as sharp as it does on a printed page, and you can see more of your high-resolution photos with pixel-for-pixel detail. In apps like Final Cut Pro® X, you can view 4K video at full size while still leaving plenty of room for your assets and editing tools.

Every new Mac® comes with OS X® Yosemite, a powerful new version of OS X, redesigned and refined with a fresh, modern look, powerful new apps and amazing new Continuity features that make working across your Mac and iOS devices more fluid than ever. OS X Yosemite is also engineered to take full advantage of the iMac’s Retina 5K display, delivering stunning clarity across all your apps.

iMovie®, GarageBand® and the suite of iWork® apps come free with every new Mac. iMovie lets you easily create beautiful movies, and you can use GarageBand to make new music or learn to play piano or guitar. iWork productivity apps, Pages®, Numbers® and Keynote®, make it easy to create, edit and share stunning documents, spreadsheets and presentations. iWork has been redesigned with a new look, support for iCloud Drive℠ and a host of new features, including a new comments view in Pages. iWork for iCloud® beta lets you create your document on iPad®, edit it on your Mac and collaborate with friends, even if they’re on a PC.