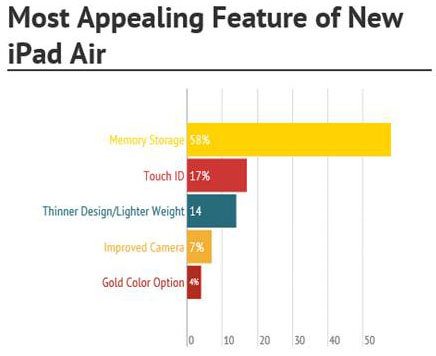 A nationally-representative YouGov poll commissioned by mobile app company FeedHenry found that increased storage tiers is the feature most are hoping the iPad Air 2 will offer in today’s event, followed by Touch ID and a slimmer, lighter form factor.

It looks like intending purchasers will get much of their wish-list. Touch ID appears a certainty, thanks to a leaked iOS 8.1 iPad user guide, and the same source also showed the camera will get the burst-mode feature first introduced in the iPhone 5s. A gold color option also seems all-but-confirmed.

In addition, we’re expecting a more powerful A8X chip, but it looks like the form factor will be essentially unchanged.

Our live-blog will keep you fully up to date, and we’ll of course be posting individual stories throughout the event. In the meantime, you can see everything we’re expecting right now.