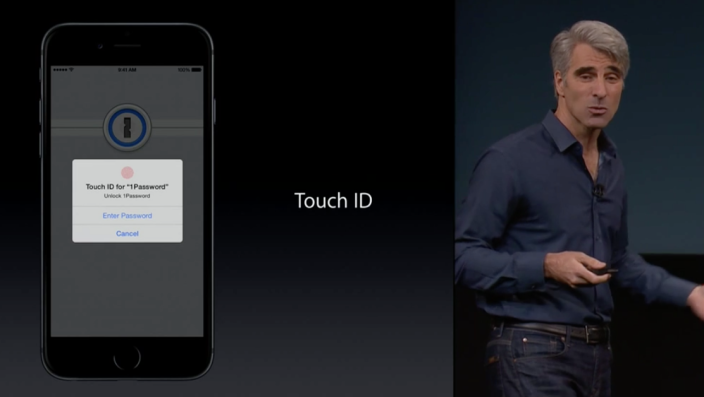 Apple gave a prominent shoutout to the 1Password secure wallet app earlier this month when Craig Federighi, who leads the OS X and iOS teams, mentioned the password management app’s support for Touch ID in an iOS 8 review on stage. AgileBits, the developers behind 1Password, mentioned the shoutout in their latest release notes for an updated version of the iPhone and iPad app which brings a list of new improvements.

1Password for iPhone and iPad is available for free on the App Store (a $9.99 in-app purchase unlocks pro features), and you can read the latest change log below.

Did you catch the awesome 1Password shout out during the Apple keynote on the 16th? If so, this release includes the Touch ID lock screen you saw on screen as well as a number of other fixes and improvements.

The lock on the lock screen now moves out of the way of the Touch ID prompt so you can enjoy our beautiful design work _and_ Touch ID at the same time, just like Craig did on stage. Speaking of our lock screen, it was starting to feel a tad sluggish, so we gave it a few shots of espresso and it pepped right up. We noticed that the keyboard was making it impossible to see everything when editing an item so we fixed that. We also fixed up a problem where folder contents weren’t being synced properly via iCloud. Did you notice how 1Password had a tendency to dismiss what you were working on when you left the app? That annoyed the tar out of us so we made sure to exorcise that demon with this release. Many more fixes for the most popular issues and crashes.

Check out 1Password’s shoutout from Federighi at Apple’s October event below (shortly after the 14 minute mark):