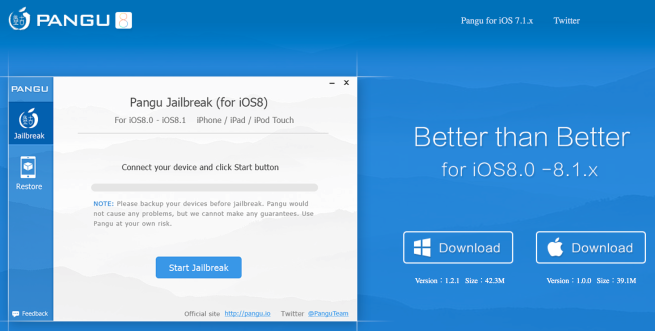 It’s finally here. The Pangu team has released its iOS 8 jailbreak tool for Mac. This will provide a one-click jailbreak solution for anyone without a Windows computer. Previously the tool was only available for Windows, which could also be used within a virtual machine on OS X, but now it’s native.

This is obviously an ideal situation for anyone that owns a Mac. This release wasn’t a huge surprise as the Pangu team confirmed that it was in the works last week, but only mentioned that it “may come out in couple of days.” Recently the Window’s version of the tool was updated to version 1.2.1 and bundled with Cydia 1.1.16 which addressed boot loop issues and that were present after a backup/restore.

We don’t expect to see any problems with the OS X release of Pangu, but make sure that you’ve backed up your iOS 8 device prior to jailbreaking. If you’re on the fence about jailbreaking this time around, Cydia’s creator Saurik has given Pangu his official seal of approval and mentioned that things seem to be “stable enough.”

Initially, Pangu’s jailbreak was released as a developer-only version and came without a Cydia installation, but since then the team has updated it with English support and various bug fixes. The first release was a big shock to the jailbreak community as the Pangu team kept quiet about its development. If you’re going to jailbreak iOS 8, now is a better time than ever.

According to a recent Weibo post (translation via Reddit) from a member of the team, Apple’s iOS 8.1.1 beta patches the exploits used by Pangu and at this point there’s no word on if the team is readying a compatible version for the future. Apple has not released iOS 8.1.1, but as you may know these things tend to be a bit random. Once the update is available, Apple will block the ability to install any previous versions on iOS devices and you’ll be stuck without a jailbreak until another one is available which may not happen until iOS 9.

How to jailbreak iOS 8 using a Mac:

Jailbreaking will open a door of opportunities and new features for iOS 8, but keep in mind that it technically voids your warranty and Apple will be unable to service a jailbroken device. The Pangu untethered jailbreak tool for OS X can be downloaded here. Stay tuned for a jailbreak tutorial which will be embedded below and let us know if you run into any issues with the tool.