Nearly four years into his tenure, Page has shown himself to be the world’s most daring CEO. His fabled “moonshots” now launch with regularity. Any one of them could change the lives of billions and help Google to remain at the top of the technology heap for generations. Improbably, Page has built his factory of the future while keeping Google’s multi-billion dollar business humming and positioning the company for a dominant role in the era of wearables and Internet-connected cars and homes. In a world where only the paranoid survive, Page has redefined paranoia into unbounded ambition.

Fortune published an article that goes more in-depth about why Page earned the top spot in this year’s list noting groundbreaking ‘moonshot’ projects as part of the company’s experimental Google X department as a big motivating factor. Included is a wide-ranging interview with Page where he discusses everything from recent acquisitions to what he learned from Steve Jobs: “I used to have this debate with Steve Jobs, and he would always say, ‘You guys are doing too much stuff’ …. He did a good job of doing one or two things really well…. We’d like to have a bigger impact on the world by doing more things.”

For Cook’s part, Fortune had this to say about the CEO earning the number two position:

Replacing a legend is an exercise filled with peril. Yet three years into his stewardship of Steve Jobs’ company, it is becoming increasingly clear that Tim Cook knows what he’s doing as CEO of Apple. The company’s stock is at an all-time high. Booming sales of larger iPhones and renewed enthusiasm for Mac computers are making up for slowing growth in iPads. The coming Apple Watch and the already released Apple Pay service show that Apple remains an innovator—even under a CEO known more for operational prowess than product savvy. Cook has replenished the management ranks at the top of Apple with relatively little rancor. The company remains secretive but has a whiff of openness. And with the purchase of the Beats headphone and streaming-music offering, Apple is reversing Jobs’ abhorrence for high-priced M&A deals. The low-profile Cook even stole the spotlight by matter-of-factly becoming the first openly gay CEO in the Fortune 500. The light still shines brightly in Apple’s executive suite, even without the legendary impresario who switched it on in the first place.

Page’s top spot over Cook comes despite Google’s stock price not performing nearly as well as Apple’s over the last year. While Fortune notes Google has grown 20% annually for three years running, it also points out that it lags Apple’s growth despite outpacing the NASDAQ. AAPL compared to GOOG over the past year below: 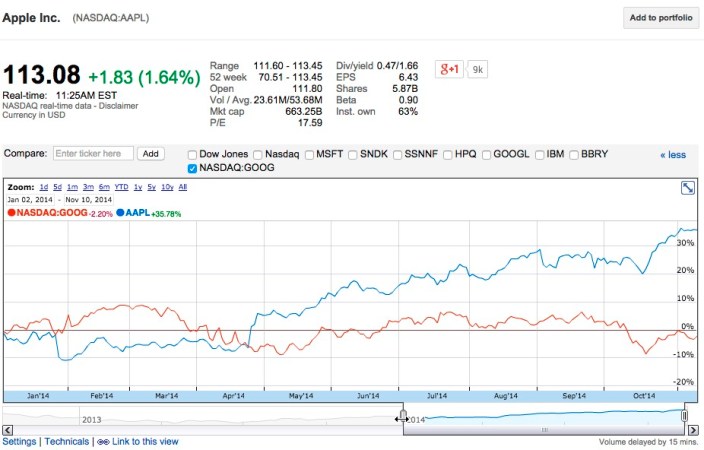 Fortune also highlighted the top 10 executives on the list as well as some other notable tech execs that made the top 50:

The full list of 50 executives on Fortune’s 2014 Business person of the year list is available to view here.