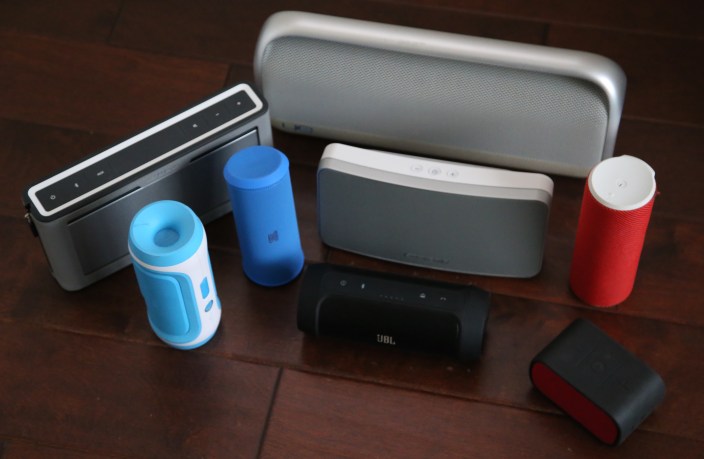 It has been a solid year and a half since our last Big “Best Portable Bluetooth speaker” competition, though we’ve done tons of updates to it in the months since.

A lot of our favorites are still around while others have been updated and new players have emerged. And what about our previous champ: the Ultimate Ears Boom? Spoiler alert: a new winner has emerged. Read on to find out who takes our Best Portable Bluetooth Speaker award…

The portable Bluetooth speaker market was created by a combination of factors. A2DP Bluetooth 2.1 allowed stereo speakers to be driven wirelessly through smartphones and computers. Phones with the ability to play lots of music over Bluetooth — like the iPhone — started to become ubiquitous. Lithium batteries became light enough and have an energy density high enough to give those speakers and radios hours of playing time. Things started coming together in 2010.

The first true portable Bluetooth speaker in the ‘modern sense’ was the Jawbone Jambox, which was a hit ignited by this amazing Sandwich video in 2010. Sure, many Bluetooth speakers existed previously, but no one really put it all together like Jawbone did.

The speakers in this realm include the Bose Soundlink III, Big Jambox, Beats Pill XL, Marshall Stanmore, Harman Kardon Aura, Cambridge Audio Minx and Bowers and Wilkins T7. I’ve been lucky enough to demo all of these great speakers.

As far as portability, three in this category can fit into a small bag: the Bose Soundlink III, Big Jambox and Beats Pill XL. The others are movable, of course, but nothing you would take on a daily basis. Moving them around the house might make sense but they aren’t on-the-go portable. If you are looking for high end sound, I can easily recommend any of the three above, but I have inside knowledge on a new product that will be launched at CES that will blow these away.

Frankly, some of the lower-priced models below will sound 95% as good but cost about half as much and have some other great features. If I had to choose one at this price/form factor right now, say for a big shopping holiday coming up, I’d go with the Beats Pill XL ($270). With Apple’s purchase of Beats, this is the flag-bearer iPod Hi-Fi speaker and with charge indicator, handle, 15 hours of battery, the ability to charge USB devices and sleek design, it is a great all around speaker. But again, I’d encourage most people to pick a mid-range device (keep reading) and save some money and space.

Moving to the other extreme, this is the most treacherous area of Bluetooth speakers — one where tons of cheap Chinese brands lurk hoping to ensnare the bargain hunter with lower quality acoustics and substandard batteries and features. I spent a few months earlier in the year going through some of the more popular ones which I rated here. Note that the same Chinese speaker will be sold under different brand names from week to week.  There are some standouts that I can recommend for under $50, however:

The OontZ Angle by Cambridge Soundworks (below) is a no-brainer, with its great sound and 10- hour battery, all for $33 shipped. 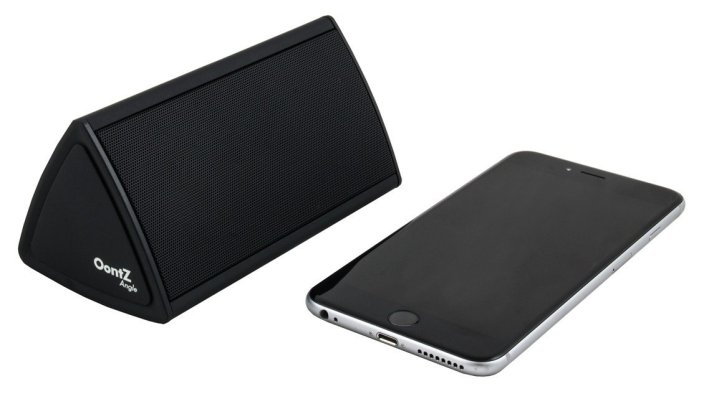 The JBL Micro is another solid, dependable good-looking Bluetooth speaker you can find under $45. You can daisy chain these if you want (I never do) and they only have 5 hours of battery. But I really like the wearable design, the superb sound for its small size, and the AUX out for headphones or home speakers. Compare with the Boombot Rex or $24 Divoom Bean (comparisons here). 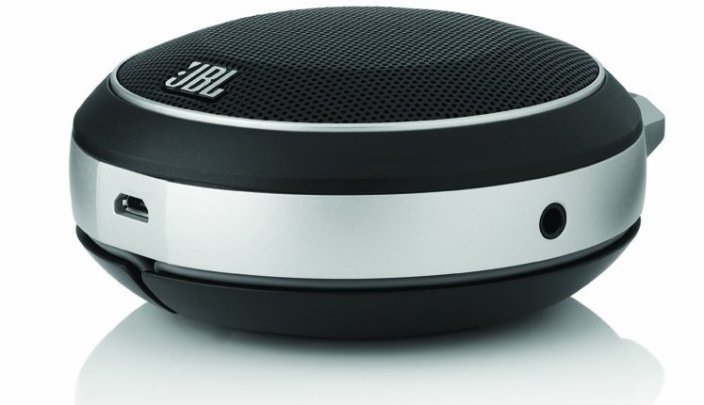 Other highly rated low cost examples can be found from Anker (which is also a speakerphone) and the $23 Aukey.

Also, we frequently rate the most recent bargain Bluetooth speakers at 9to5Toys so keep an eye out for good deals there.

Most portable Bluetooth speaker shoppers should wind up here, and with prices starting way below $100 and reaching up to $200, there is something for a variety of budgets. Last year I gave Logitech/Ultimate Ears Boom and Mini Boom the nod as the best all around Bluetooth speakers and my feeling for most people is that they will still be extremely happy with either product. UE combines Micro-USB charging, the ability to be used as a speakerphone, great designs (although I’m not always nuts about the colors) and great iOS and Android app. And it provides nearly the best sound in this price range. Expect a best-in-class 15 hours of battery life from the Boom as well. Smart shoppers should be able to find the Mini Boom for $70 and regular boom for $179. But before you buy, there are other options to consider… If you are looking for the smallest sized speaker that still sounds great, take a look at the Beats Pill 2 which can be found for as little as $180. It is quite pocketable and has sound that is heads and shoulders above the low-end models mentioned above. It will even charge your phone with a USB-out. But for $180, I’d easily take the UE Boom, for sound alone.

For a little more cash, I’m still going to take the Bose SoundLink Mini. I called it the best sounding portable bluetooth speaker ever in my long read review and I still stick by that. Of course Bose is highly polarizing with its sound profile but across the board, people who’ve heard the Mini have been blown away.

But Bose has its downsides as well. First of all, it is almost impossible to find it for less than its $199 list price. It also charges via a proprietary AC adapter rather than micro-USB standard, which makes it a hassle to charge on the go – which is made more painful by its shorter, 6 hour battery life. Finally, it doesn’t do speakerphone calling, which hampers its accessibility. Plus, it requires a manual turn on every time it wakes from sleep.  But Ohhh that sound. 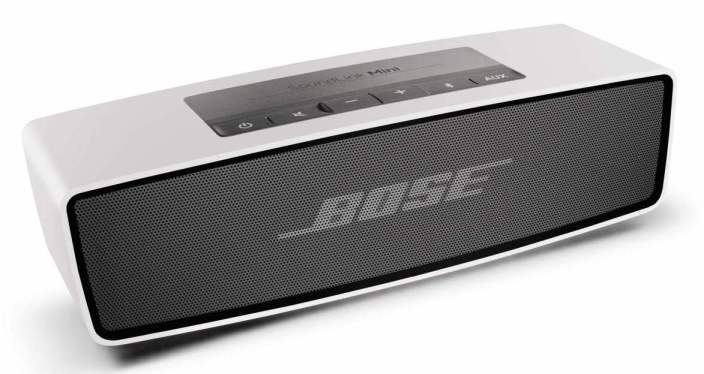 Bose recently released the $129 “Color” version of its Soundlink family. Although I haven’t spent much time with these Micro-USB charged speakers, at $70 cheaper, I have been very impressed with their sound. I’m not a fan of the look — which I find akin to a change purse — but given some more time with it, the Soundlink Color could be a top pick. 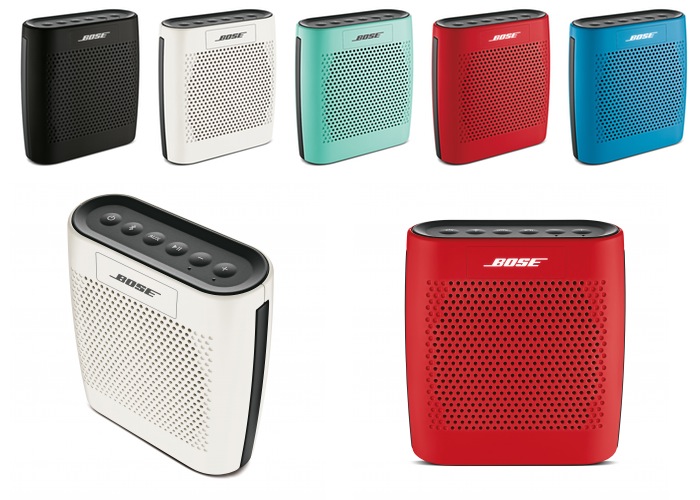 My 2014 Bluetooth Speaker of the Year is also the most improved: The JBL Charge 2 is better in almost every way than the Charge it replaced, and that was a damned good Bluetooth speaker when I reviewed it last year.

Why do I think the Charge 2 is the best? It does just about everything very well and it costs significantly less than its competitors. (Base: $150 but sometimes as low as $120.) It charges via Micro-USB and works great as a speakerphone, so it already compares well to the UE Boom and its similar cupholder-friendly cylinder form. The Charge has a crazy long 12-hour battery life via 6000 mAh battery, but it also has a USB power out for charging your phone or tablet — something the Boom lacks. It is also a very attractive device and comes in 5 colors.

But the sound is more impressive than its cheaper price, better appearance and phone-charging capability. The bass response has been improved from 150 to 75 Hz, and the power output has also increased from 2 x 5 to 2 x 7.5 watts. The big thing in sound here is that the Charge 2 actually has two bass speakers that point outwards and give you real live stereo separation (the original Charge only appears to have 2 outward facing monitors). It sounds great whether you use it on a desktop, outside at the beach, in a rental car, a kitchen or at the office.

I’m not going to say the sound is better than the Bose Soundlink Mini here, but it is close and I’d take the sound over UE Boom. It also doesn’t match the sound of the high end $300+ speakers mentioned above. But it is close enough that I’m willing to overlook this minor shortfall as a tradeoff for portability, lower price and additional features.

There is one problem, however, which I wasn’t able to replicate. Some forums members and Amazon reviewers report that at lower volume, listening to voice-heavy sound, there is bass interference. I can only imagine this was an early manufacturing defect because I haven’t been able to replicate it with my recent review unit — and most other reviews don’t mention it. If you get a bad unit, return it for a better one.

One last fun feature: the Charge 2 has a social button, which allows 3 people to hook in to the Bluetooth simultaneously. I didn’t try this because my music is the best.

Just like UE did last year, JBL Charge 2 has taken a product category that the Jambox invented. And it has outdone the pioneer. I still like Jamboxes but their price/sound ratio is too high.