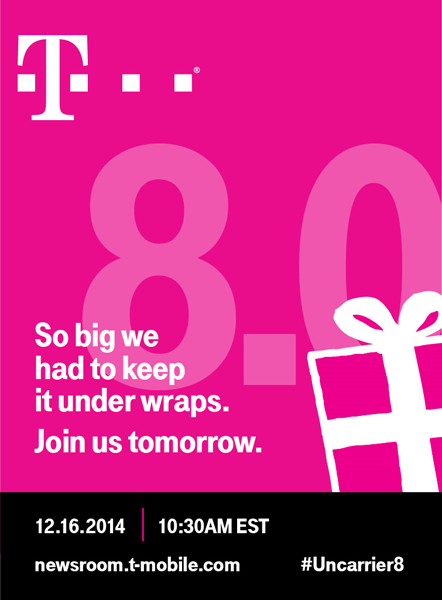 T-Mobile has announced that it will be unveiling its latest contract-free deal in a livestreamed ‘fireside chat’ tomorrow, Un-carrier 8.0.

Un-carrier 8.0 is ready to roll, and you’re invited to join us for the unveiling of one of our biggest and boldest moves yet! This one is so big we had to keep it a surprise.

Join John Legere, CEO of T-Mobile, as he unveils the news during a live fireside chat with David Pogue of Yahoo! News. David will be taking questions for John from Twitter through @JohnLegere and @Pogue and the #Uncarrier8 hashtag.

The company hasn’t hinted at any of the details, but we’ll of course let you know …

T-Mobile has also announced that its new Wideband LTE service is now live throughout the greater New York City metro area, and is claiming a speed boost of “up to 50 percent.”

T-Mobile claims the service allows un-carrier customers to download a 90-minute HD movie in 3.5 minutes, and a music album in nine seconds – though notes that these claims rely on a “theoretical” peak speed of 110Mbps, with the real-life average so far of a rather more sedate 22.2Mbps. The company says this is, though, “faster than AT&T and Verizon and more than two times faster than Sprint’s network speeds.”

Competition among carriers has been heating-up of late, with Sprint announcing a ‘cut your bill in half’ promo for AT&T and Verizon switchers a couple of weeks ago, and T-Mobile announcing a 2-line unlimited data family plan for $100/month.