A new report from ITG has revealed that Apple Pay was responsible for 1% of the total digital payment dollars spent in November. The study also found that 60% of new Apple Pay customers used the service multiple times throughout the month, while competing services like PayPal see only 20% of customers do the same.

Additionally, the research found that shoppers who took advantage of Apple Pay used the service for around 5.3% of their future credit card transactions, accounting for about 2.3% of the total dollars spent on their credit cards.

On average, Apple Pay users used the NFC-powered payment system 1.4 times each week. At businesses where they had previously used Apple Pay, 66% of customers used it again on subsequent visits.

Walgreens came in at a close second for payment percentages, with 19% of Apple Pay transactions happening in the popular drugstore chain. However, a much larger gap existed between Walgreens and Whole Foods in the second metric, with Walgreens only bringing in 12% of all Apple Pay dollars. 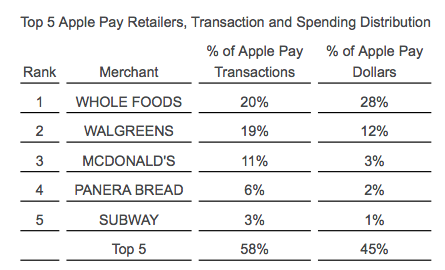 Overall, the top five businesses taking Apple Pay, which included McDonald’s, Panera Bread, and Subway in the last three spots, took in 58% of the total Apple Pay transactions conducted in November, though less than half of the total dollars spent through the service went to those outlets.

It’s clear that Apple Pay is making inroads with general consumers that other payment services just haven’t been able to keep up with.