Review: MacID, the app that lets you unlock your Mac using Touch ID on your iPhone

No sooner did we get Touch ID on our iPhones than it started to feel horribly old-fashioned and tedious to have to login to our Macs by typing in a password. Apple will no doubt add Touch ID sensors to Macs soon I imagine, but if you can’t wait that long–or don’t want to have to lay out the cash on a new Mac–there’s an app for that.

MacID is a $4 app allowing your iPhone to unlock your Mac via Bluetooth LE. As you can see from the above video, once you’ve performed the setup, unlocking your Mac is as simple as selecting the device on your iPhone and then placing a finger or thumb on the Touch ID sensor …

MacID uses Bluetooth LE, so both your Mac and iPhone need to support that. All iPhones with Touch ID–the iPhone 5s, iPhone 6 and iPhone 6 Plus–are compatible. Technically, you can use the app with an iPhone 4S or 5 too, but it’s a bit pointless without Touch ID. You could also run it on a TouchID-equipped iPad, which might work for some who use their Macs and iPads side by side.

For Macs, it depends on the model. For MacBook Air and Mac mini, you need a 2011 machine or later; for MacBook Pro and iMac, you need 2012 or later. It also supports the new Mac Pro. 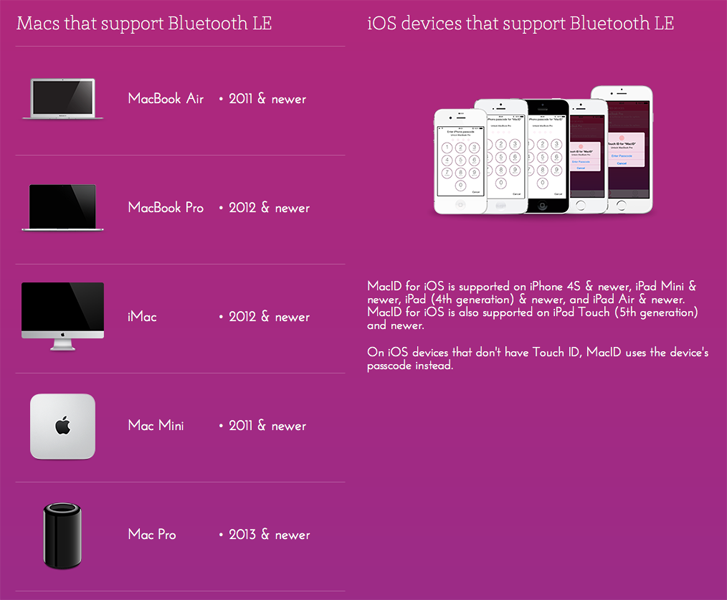 For older machines, there’s always Knock, an app that lets you unlock your Mac by tapping on your iPhone, but that of course doesn’t offer the security of Touch ID.

MacID is an iPhone app with a companion Mac app. On the Mac, you run the app, select your iPhone from the nearby devices and tell it your Mac login password. The password is stored only on your Mac, and is encrypted using AES256 – the same encryption used for banking apps. 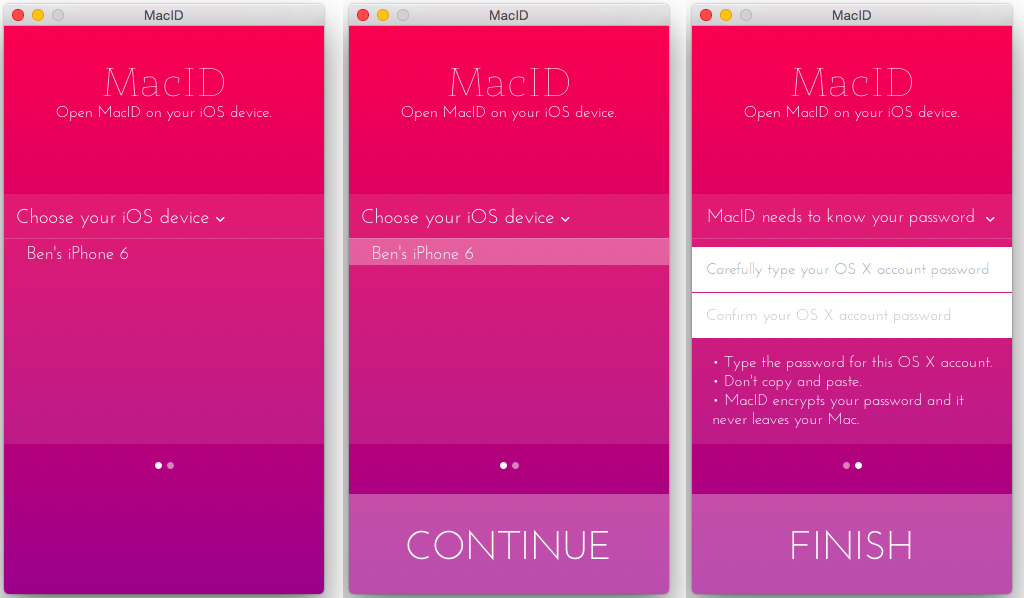 There’s nothing to do at the iPhone end: all the authorization is done at the Mac end. This does mean that, if there are other devices within range running the app, you need to be careful to select the right one. This is unlikely to be an issue in practice, and you can deauthorize an iOS device from the Mac app at any time.

You can also set the Mac app to auto-lock when your iPhone goes out of Bluetooth LE range, but that can be quite a long way, so isn’t that useful an option in practice.

You can install both iOS and Mac apps on more than one device, allowing you to unlock one Mac using more than one iPhone, or allowing a single iPhone to unlock multiple Macs. The only weakness is, because the account password is stored in the Mac app, you can only login to one account on the Mac.

It did, though, occur to me that the app could also be a convenient way to give someone temporary access to your Mac account without telling them your password: just authorize their iPhone, and remove the authorization from the Mac afterwards.

As you’ve seen from the video, usage couldn’t be simpler: select your Mac from the list of devices on your iPhone, then put a registered finger or thumb on the Touch ID sensor. 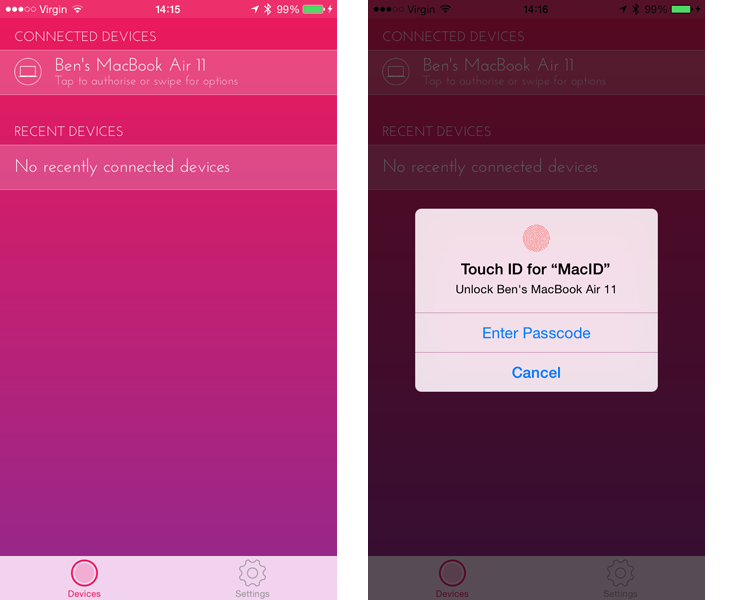 Apple’s secure enclave on the phone means that third-party apps like MacID don’t have access to your actual fingerprint data: using the Touch ID sensor simply asks the secure enclave whether or not the fingerprint is valid, and waits for a ‘yes.’

To lock your Mac, you can either put it to sleep in the usual way or, more easily, click the menu bar icon for MacID and select the lock option: 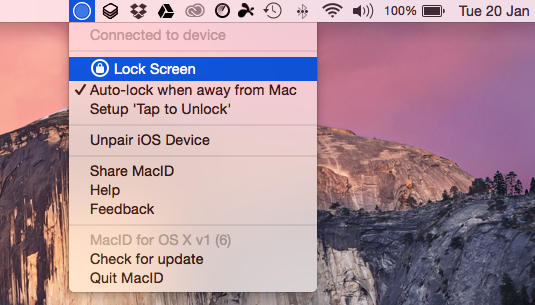 The app doesn’t need to be running in the foreground: if you go out of range of your Mac and then return to it, the Touch ID prompt will pop up automatically so long as the app is running in the background.

Most of the time, MacID worked flawlessly. Every now and again, it did get confused, especially when the Mac was actually asleep rather than just locked, but that may have been because I was testing it by locking and unlocking many times in quick succession. I didn’t experience any issues during real-life use.

This really is the key question.

From a gadgeteer’s perspective, it’s obviously way cooler to unlock your Mac using Touch ID than to do anything as mundane as typing a password. From a convenience viewpoint, however, you have to ask yourself whether getting your phone out of your pocket and touching the sensor is any less hassle than typing a password.

The answer, I think, comes down to your particular circumstances. If you use your Mac in an open-plan office, and are leaving it unattended multiple times during the day, and you are typically carrying your iPhone in your hand when away from your desk, it’s a no-brainer. At the other end of the scale, if you leave your Mac unattended in public rarely, and your iPhone lives in your pocket, that reduces MacID to a cool gimmick.

I’m toward the latter end of the scale. I have a home office, so the only time my Mac is left unattended in public is briefly in business lounges or coffee shops, when my iPhone is normally in my pocket. I have been using it, but that’s partly for the purposes of this review, and partly the novelty factor.

MacID does suggest that the app allows you to have a much stronger password that you might use when typing it manually every time you login, and there is some merit to this argument.

Ultimately, though, it’s four bucks: not exactly a major investment, and if nothing else, it will impress your mates.

MacID is a $3.99 purchase from iTunes. The free Mac companion app can be downloaded from the MacID website.