A double-edged sword: did the iPhone preserve RadioShack…or kill it? 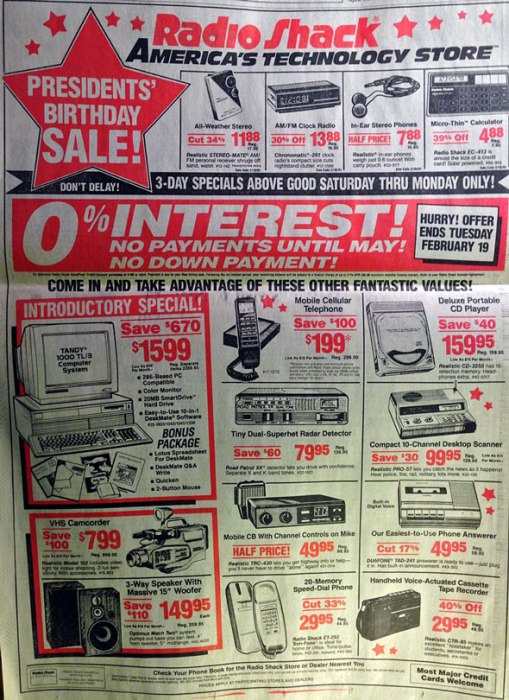 The day has finally come. It seems struggling electronics retailer RadioShack is finally dead. This doesn’t come as a surprise to anyone who has paid attention to the company at all in the past few years. The chain hasn’t turned a profit since 2011, and several attempts to reboot its image have failed miserably.

How RadioShack reached this point is also no surprise: it failed to keep up with the ever-evolving technology market, choosing instead to attempt to walk the line between DIY hobbyist and mainstream electronics.

While no one would argue that RadioShack’s insistence on keeping one foot in each world eventually led to its demise, it could also be argued that it’s exactly what kept the company around for so long.

You may have seen the image above at some point in the past year. It’s a full-page RadioShack advertisement that tries to sell buyers on products like a portable music player, a mobile phone, and an Internet communications device. These days just about every single product on that page can be replaced with a single iPhone.

That’s exactly why so many people point to the rise of the modern smartphone as a key factor in RadioShack’s slide into irrelevance, but that isn’t an entirely accurate assessment.

Aside from batteries, a large number of the other products in the store are pretty much useless to most people. As DIY customers tapered off, cell phones became RadioShack’s biggest moneymaker. Employees were regularly reminded of that fact by management and in turn so were customers.

I spent a year working at RadioShack from 2011-2012, which provided me with an up-close look at how the business operated during its last profitable quarter. I can speak from experience when I say that the company was absolutely interested in joining the modern technology market. Unfortunately no one in a position of leadership had any idea about how to do that.

You’ve probably heard horror stories from previous RadioShack employees, and I’m not going to dispute any of them. I have no doubt they’re mostly true, and I’ve got plenty of my own, but many of them come down to one basic fact: selling phones was the most important thing you could do when you clocked in. Employees were ranked every month, and those who sold the fewest phones got the boot.

The store I worked at was considered one of the best in the region in terms of sales, but we regularly went entire days with only one or two customers. At one point—out of sheer boredom due to the lack of business—I took a look at our sales numbers for the day and discovered that the store was losing money just by paying the three employees that had showed up to work that day.

That was a pretty typical situation for our store and many others—unless we managed to sell a phone, that is. Phone sales juiced our numbers more than anything else, especially if we had a couple or a family looking to switch carriers or upgrade their phones all at once, and even more-so if we could talk them into buying a bunch of accessories. We actually made money on those days.

Unfortunately, RadioShack didn’t do a great job of embracing the smartphone revolution. Its pre-order process for new phones was so clunky and convoluted that to this day I don’t fully understand how it works (it involves buying $50 in RadioShack gift cards!), and the stock that we got was never what people wanted. Remember the HTC Status, that phone with the “Facebook button” on the front? We got a bunch of those, along with big signs for the windows advertising the availability of this incredible new handset (which we never sold). iPhones? We got like four at launch if we were lucky, and subsequent shipments didn’t come until we sold those—or long after.

While RadioShack was flopping on delivering smartphone, accessories and repair options to its customers, a bunch of specialty kiosks turned up in every mall in the US to deliver exactly those services.

An example of RadioShack’s inability to get the littlest things right can be found in a story from about a year or so after I quit. When the iPhone 5 launched, I bought mine through Apple’s online store, but a friend pre-ordered his through my old RadioShack (one of the best in the region, mind you). Not only did they manage to lose his pre-order device, but they never actually found another of the same model for him. After several weeks of back-and-forth they gave him one in the wrong color and told him that was the best they could do. 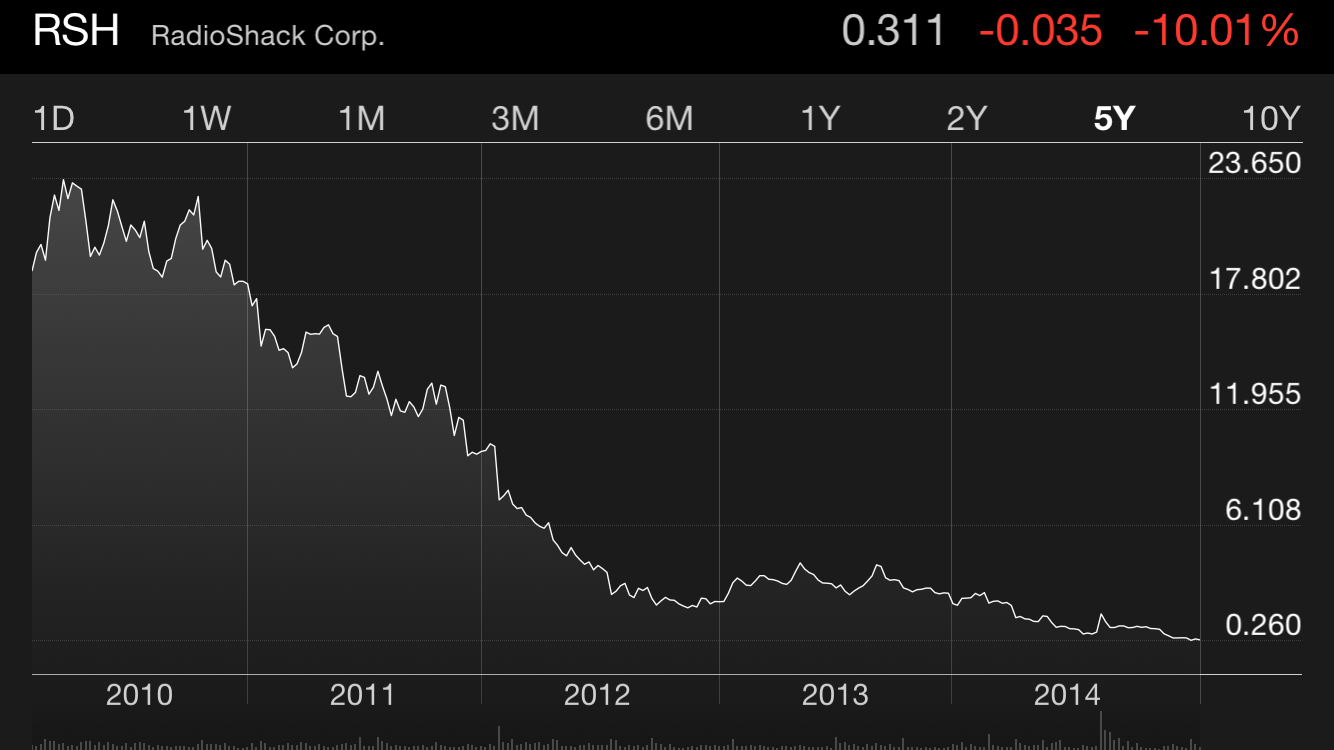 RadioShack has had some rough times

It’s not hard to see that RadioShack had no idea how to handle the smartphone business. As the company floundered to understand how to market the latest models, newer ones were being released. Customers quickly picked up on the fact that most employees lacked up-to-date information (thanks to incredibly bad training materials) and instead went directly to carrier or Apple stores.

But despite all of that, the advent of the iPhone (and the subsequent flood of similar devices) may have helped RadioShack overcome poor management and waning public interest in most of its products and stick around for a few years beyond its expiration date simply by providing a source of revenue that people actually wanted.

So yes, it’s fair to say that the iPhone replaced most of RadioShack’s products, and that the chain’s failure to fully adapt contributed to its eventual downfall, but perhaps it would be more accurate to say that the store already on the way out thanks to big financial mistakes and failures in its leadership.

In reality, the iPhone, no matter how poorly embraced by the company, may have (temporarily) served as RadioShack’s saving grace, but ultimately the smartphone and iPhone in particular destroyed RadioShack’s once successful business model.