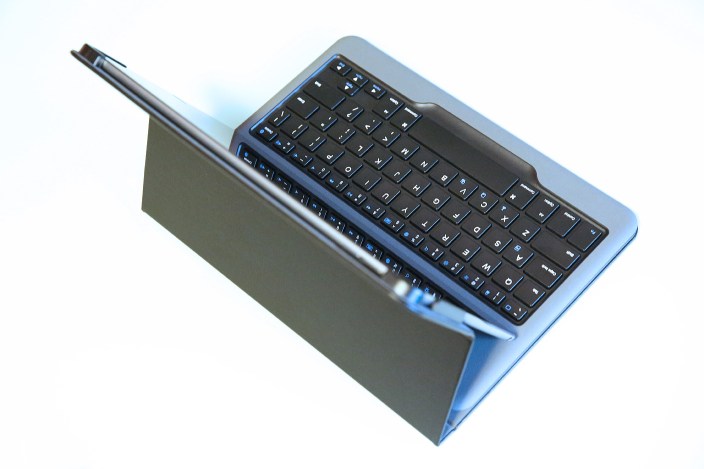 I’ve tested almost every major iPad keyboard case since the first iPad was released five years ago, and still recall when companies charged $100 for greasy vinyl folios with terrible, squishy rubber keys. Thankfully, a lot has changed since then. If you’re willing to spend $100, you can get a much nicer iPad-holding case attached to a nearly great keyboard. Drop $130-$150 (or go nuts for $170), and you can get a metal keyboard that partially resembles a MacBook Air. Personally, $100 is the ceiling I’d ever be willing to pay for an iPad keyboard case, and I’d rather pay less. But unless you count discontinued models for prior-generation iPads, there aren’t many great options.

Anker is changing that. Its new Bluetooth Folio Keyboard Case for iPad Air 2 sells for a stunningly low $40, and just like the 25,600mAh Anker iPad battery pack I previously reviewed, it delivers remarkable value for its price point. As the product of strategic compromises, it winds up giving up only one thing I typically prefer — a complete iPad-holding frame — in order to offer an excellent typing experience for the same cost as a typical iPad case without a keyboard. Read on for the reasons why I’d recommend this over options costing three times the price. 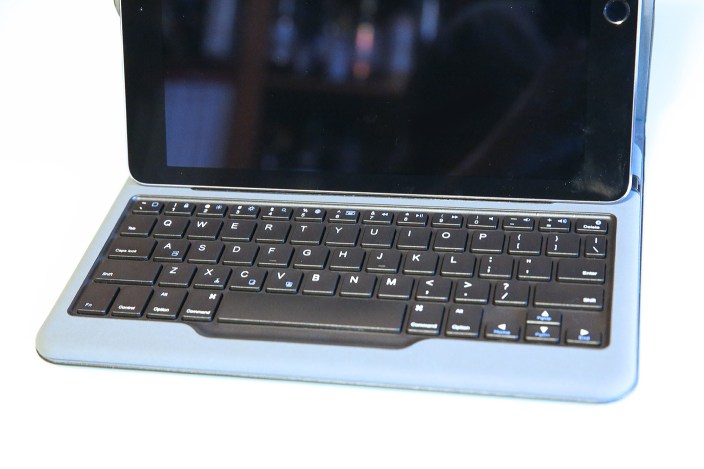 Many of the iPad keyboard cases I’ve liked in the past have focused a lot upon the frame that holds the iPad, but the core element in Anker’s Keyboard Case is the keyboard — the part that needs to work well, or else. There’s no better way to explain the keyboard’s design than to say Anker got it all right: the keys are responsive, reasonably-sized, and comfortably separated, with no oddly-remapped or missing keys. Apart from the now-standard merging of iOS function keys with the top row of numbers, all of Anker’s keys are in the same places as on Apple’s own Wireless Keyboard. It took no time at all for me to start typing as well on Anker’s keyboard as on Apple’s, far less than the 15-30-minute adjustment time (with cramped fingers) I’ve experienced with many iPad keyboard cases. 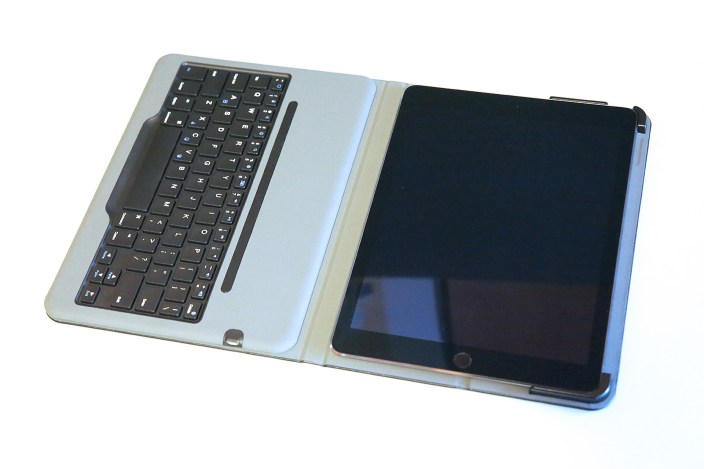 Anker achieved this by refusing to shoehorn its keys into an overly narrow space. The Keyboard Case’s footprint is a little larger than the iPad Air 2, in part to accommodate the minimalist frame it uses to hold the tablet in place. Hard plastic ribs lined with rubber firmly hold the iPad’s right edge inside the case, while a magnetic bar enables the iPad to form a very stable typing/video viewing angle atop the keyboard, as well as automatically powering the Bluetooth wireless feature on and off. Other magnets hold the case firmly closed, and automatically unlock the iPad’s screen when it’s opened. All of these innovations appeared first elsewhere, but work perfectly here. 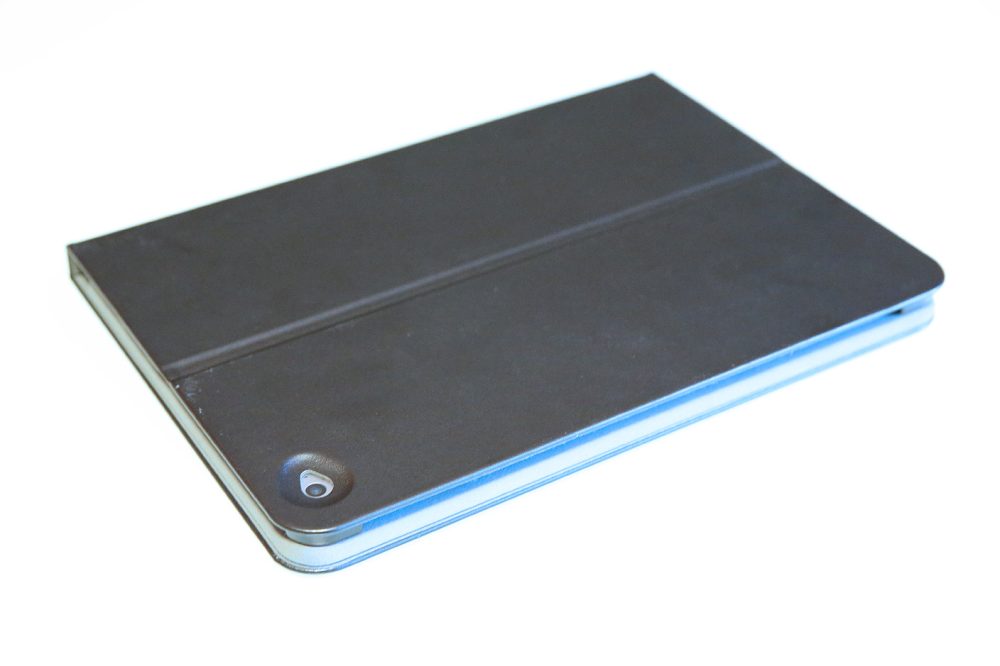 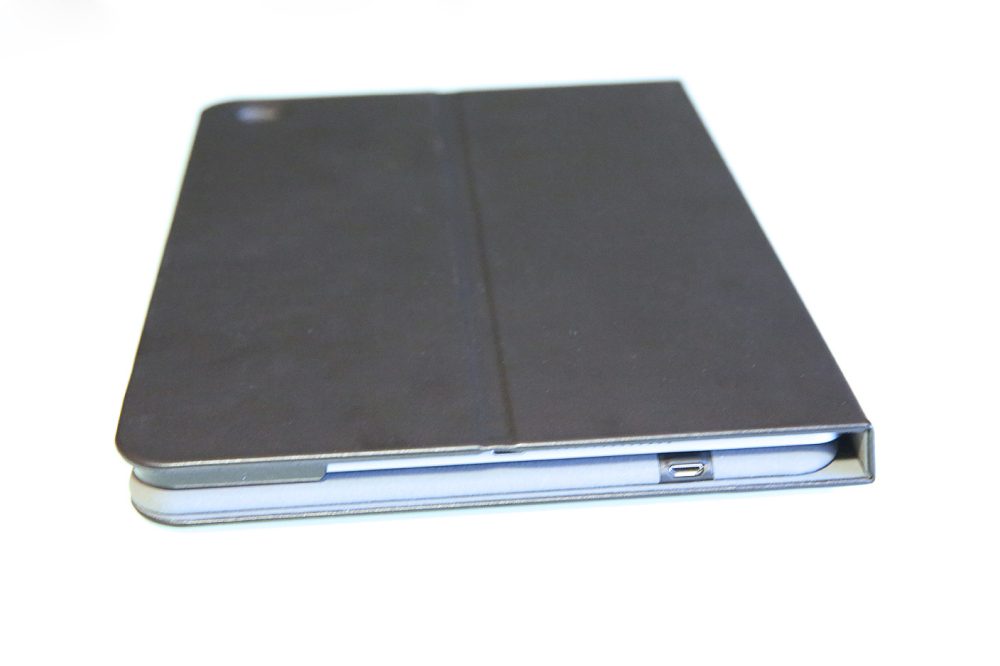 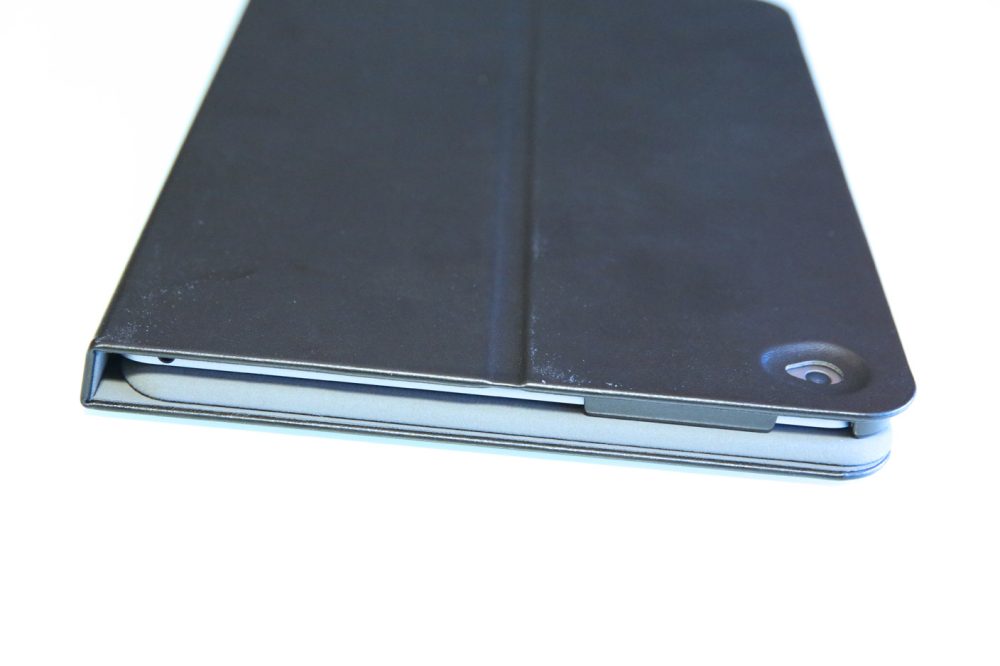 The only negative with Anker’s design: the iPad’s edges and buttons are recessed inside the folio. While the protection is welcome, this can make the buttons a little more challenging — not hard — to access. This would matter more if the volume controls weren’t also accessible from the iPad’s Control Center, or if there weren’t magnets in the case to automatically lock and unlock the screen. As-is, it’s a design compromise with little real-world consequence. 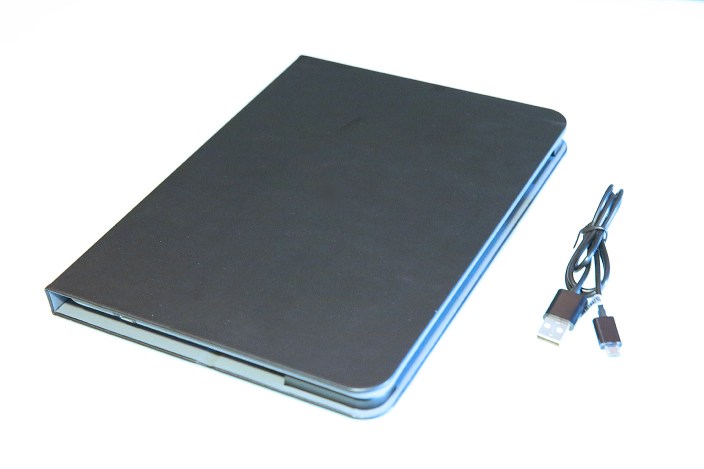 The Keyboard Case’s other features are also compelling: using the included micro-USB cable, you get six months of battery life between charges, which is in the middle of the two-month to twelve-month battery lives of rival keyboard cases. Faux leather used on the exterior looks and feels enough like real fine-grain leather to pass executive boardroom muster. And the eco-friendly cardboard packaging is a much-appreciated alternative to the overwrought boxes packed with plastic, foam, ribbons and magnets used by too many companies.

As a design judge and tester of literally thousands of Apple accessories, it’s very clear to me that Anker really knows what it’s doing. Even at budget prices, accessories like this are rapidly earning their way into my personal travel bags when I have access to more expensive and complex alternatives. If you’re looking for a keyboard case — or didn’t consider them in the past because their prices were unappealing from accessories like this — I’d highly recommend that you consider the Bluetooth Folio Keyboard Case as a viable option.