Opinion: Why I think the Apple Watch marketing so far is mediocre

In the run up to the Spring Forward event, many people were expecting to see a lengthy exposition of the Apple Watch, to clarify confusion and offer a clean explanation as to how this product plays an essential role in people’s lives. What transpired was not that, at all. Apple’s event was a grab-bag procession of various product announcements, from Mac to Apple TV, concluding with a review of Watch features alongside pricing and availability details.

It did not help consolidate the vision for the Watch. Apple’s messaging for this product is almost the same as it was back in September. The company has not succinctly provided a reason for the Watch’s existence.

That’s not to say it doesn’t have one. I think the Watch is a great product with a good sales trajectory ahead of it, especially the $349 Sport models. The marketing aspects are lacking, so far. The Watch does not have clearly defined themes. Apple’s attempts at promoting three ‘tentpole’ use cases have, in my view, been conveyed poorly.

Since September, Apple has reinforced three lines about the Watch: an ‘amazing timepiece’, a comprehensive health and fitness device and an intimate way to communicate. There’s something amiss here — they don’t pack the same punch as when the iPhone was marketed as a three-way phone, music player and internet device.

The ‘amazing timepiece’ bit is particularly weak, particularly because most people who Apple wants to capture with this product do not wear a watch today. For those people, myself included, the fact that Apple Watch is a good watch has little impact on my purchasing habits.

In addition, watches today are generally good at telling the time. Apple harps on that the Apple Watch is accurate to ± 50 milliseconds but nobody cares. Normal watches do drift away from telling correct time but only by a few seconds — it’s not aggravating. Compare ‘amazing timepiece’ to ‘amazing mobile phone’. The iPhone was a better phone than other phones with features like threaded messaging, one button conference calling and Visual Voicemail. Keeping in sync with the atomic clock is not a concern that the general public cares about. 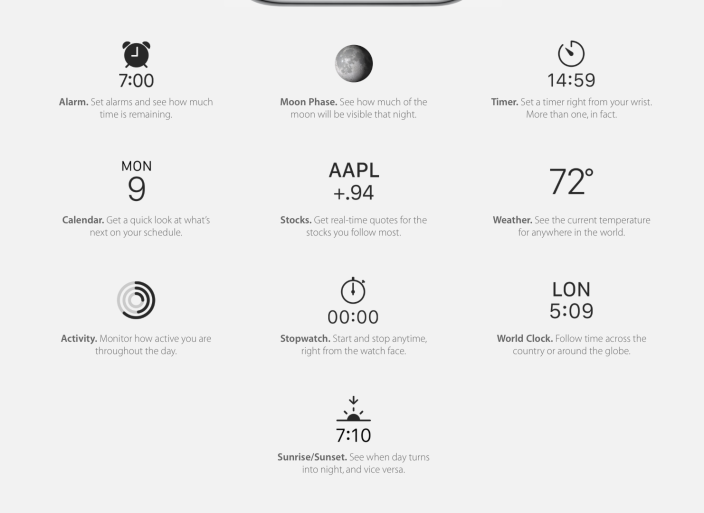 What’s frustrating is that one area where the Apple Watch can do better than traditional watches, Apple has not promoted well at all. Complications. This is a fantastic example of something arbitrary bitmap screens can do miles better than fixed-in-place mechanics. According to Apple’s site, there are ten different types of complications you can add to every watch face. On traditional watches, you are lucky to get a dial for the date and a dial for the moon phase. Also, unlike physical watch faces, you can remove, add and rearrange these widgets as you please. If you use the calendar for event tracking, add it. Otherwise, don’t.

In fact, the Watch OS includes comprehensive customization features. Just yesterday I spotted a clock-face configuration that I’ve never seen before. These personalization features not only offer incredible utility thanks to the unique conveniences, users love being able to tweak stuff like this for individuality. In the same way we are all discussing what watch/band combination we are buying, Apple’s marketing missed an opportunity to provoke discussion about what styles and what customizations we want to apply to the clock faces.

The complications concept also extends what watches do today, so it’s relatable and is a good demonstration of why the product can be an ‘amazing timepiece’. The software features offer a suggestion that this is a better timepiece, that can show time-sensitive contextual information far beyond the current hour, minute and second displays of normal watches.

The second tentpole feature revolves around intimate communication. The Digital Touch suite (tap, sketch, heartbeat) is interesting but again faces difficulties in presentation. This service relies on the network effect of people having the feature for it to be useful. As such, on-stage demos are weakened by their artificiality. Selling an Apple Watch through Digital Touch will become a lot easier when you can receive a drawing from your actual friends and people you actually care about. Rehearsed demos don’t have the same emotional impact. Hopefully, Apple’s ad team will be cooking up some heart-wrenching commercials for Digital Touch right now. There’s a lot of potential to replicate something similar to the FaceTime ads.

The network effect problem, naturally, means that selling the Watch on this spoke initially is hard. On Monday, I saw Apple branch out ‘intimate communication’ umbrella to include things like iMessage and WeChat. This is a good pivot to build upon established services. The audio message feature of iMessage makes a lot more sense in an Apple Watch world. I also think the Watch’s animated emoji will help drive interest, as they are not limited to messages. The WatchKit API allows those images to also be posted on social networking services — they are just GIFs. For more serious customers, Apple should also reinforce the usefulness of the Watch at managing email. This stuff needs to be repeated multiple times to sink in. The iPhone ads continue to prominently feature the Mail app and they have done since 2007.

The health and fitness tentpole is — by far — the easiest vector for the Watch right now. It’s simple to portray and doesn’t require a network of friends to get into. It’s also very easy to get celebrity endorsements for health and fitness features, like with Christy Turlington’s blog. Personally, I had never heard of this women until she was introduced by Cook at the event, but she is obviously influential. 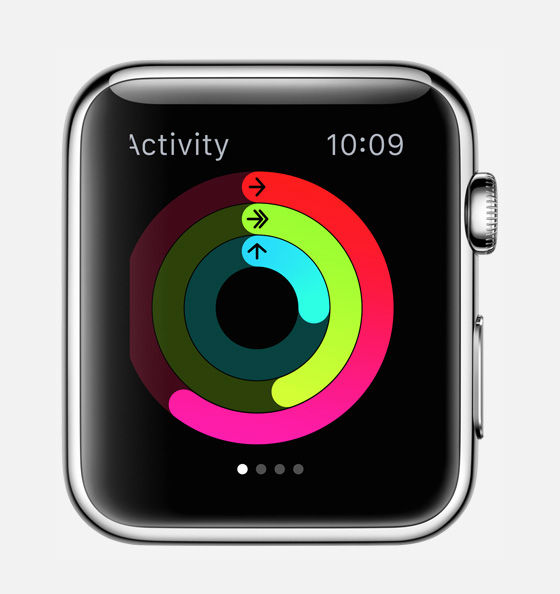 Everyone has aspirations about living healthier lives — Apple is capitalizing. The relative success of fitness bands (with no brand anywhere near the size of Apple) shows that this market is huge. It’s hard to make a judgement until I have a Watch in my hands but it also helps that the fitness features are very well fleshed out in terms of software. The two apps, Activity and Workout, are very polished. There’s even a companion app for the iPhone. Thanks to the way the Activity app is designed to track three separate metrics, I’m pretty sure users will get a sense of accomplishment out of these apps, even if they don’t complete all three rings every day. The targets seem achievable and standing up every hour to get a nice badge is the epitome of gamification. The Workout app serves the needs of more serious users, with fitness routines for the gym and such.

Apple’s video in September did a decent job at enumerating these aspects of the Watch, but the marketing could definitely have been better to date. There is little talk about the fitness features, despite their focus inside the software. To me, that indicates a disconnect — when genuinely useful features are not being portrayed to the public well. I’m not sure why it doesn’t have the impact it should — I think it comes down to the bits of Apple’s press for the Watch that doesn’t come under the three headline categories.

I count marketing as product marketing: the way the product has been made is an essential part of the overall way the product can be presented to consumers. Quite simply, the Watch does too much stuff resulting in a fuzzy mess of features. Due to the maturity of the iOS platform, the Watch requires more breadth of functionality than when the iPhone or even the iPad debuted. However, it still does too much which indicates to me Apple is unsure exactly what the Watch’s purpose is itself. ‘It only does everything’ is not a good way to sell products. 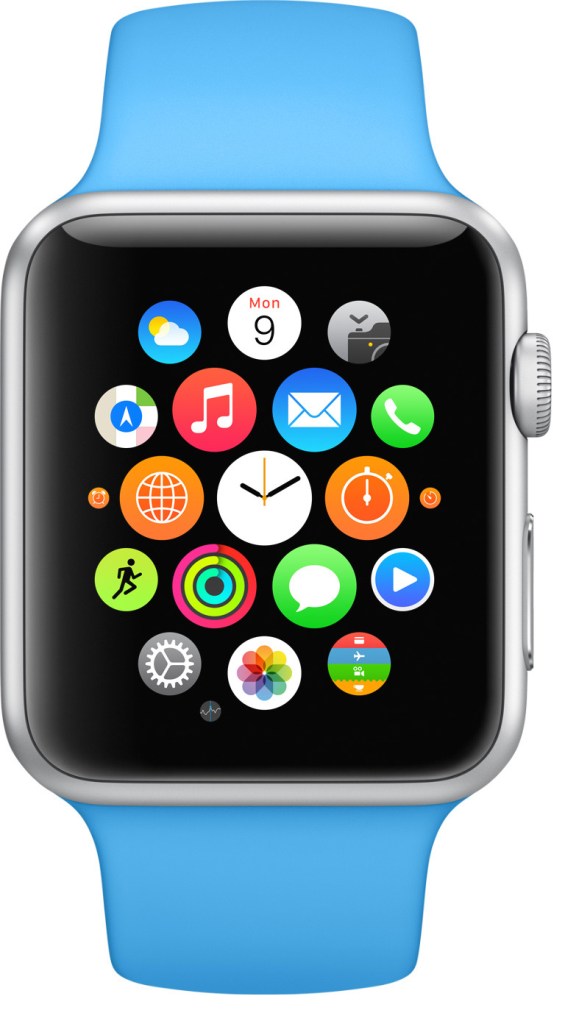 That Home Screen is complicated, if you’ve never seen it before.

Combine that with a raft of third-party application software and you have a right mess to disentangle. I think the iPad had similar issues (and still does in many respects) but it’s baseline feature set was not as muddled like the Watch’s. Play video, surf the web, read stuff. Much cleaner than the vagueness of selling ‘an amazing timepiece’. The iPad also had a ‘we already know how to use it’ factor that the Watch simply doesn’t. The iPad had familiar interactions and familiar use cases.

This product would struggle to find its footing if it wasn’t backed by a company with such incredible brand power. The Heart Rate glance is such a great gimmick it will sell a few hundred thousand devices by itself. Apple is reining in third party developers somewhat (having Kevin Lynch demo everything rather than individual company representatives, limiting initial API) but it still leaves the array of miscellaneous features seen here as a big messaging problem. Maybe this random mixture will be less intimidating when the Watch can be handled in person but for now it crowds out the headline features, complicating the message. That Home Screen is a little bit daunting the first time you see it.

‘There’s an app for that’ was a great iPhone advertising campaign because it relied on the core iPhone pitch being solid too, so that the App Store became the gravy. The Watch is a bit imbalanced on that scale.

Just to clarify my position, so it cannot be misconstrued, I have little reservation to say that the Watch will not be a success, especially the Sport model. Apple is an established company with enough resources to overcome the issues I have presented above in influence alone. I’m just saying I see this as a poor launch of Apple’s newest new product category. When friends ask me about why they should buy a Watch, I struggle to offer a good answer, even when I think that they would benefit from owning it. That is the ultimate consequence of Apple’s mediocre marketing to date.