Developer unlocks Activity app inside iOS 8.2, appears when an Apple Watch is paired to iPhone

Developer Hamza Sood has done some digging inside the public iOS 8.2 build that was distributed to users on Monday. Although the Apple Watch is included by default as stock app (undeletable, whether you like it or not), the OS also includes an Activity app. Although it was previously known that the app existed, Apple has not shared details about what features the app has or even how you installed onto your phone.

Sood claims that the Activity app automatically appears on your Home Screen, once an Apple Watch is paired to the iPhone. After setup of the Activity features on the Watch itself, the app unlocks. 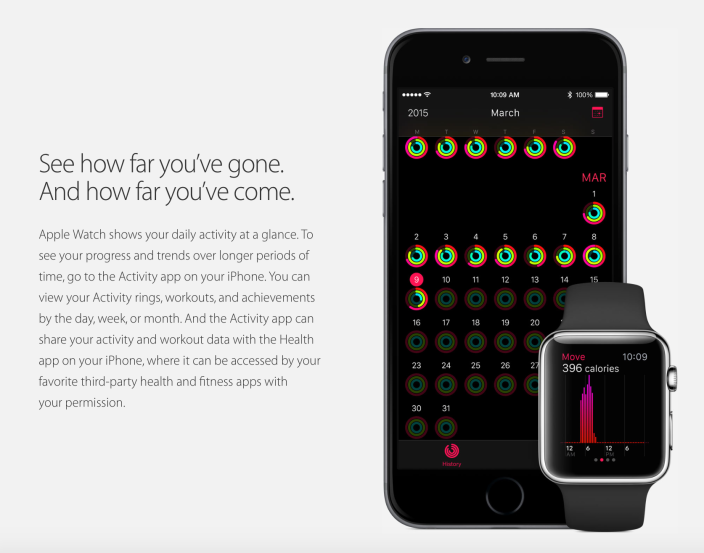 This is what Apple has shown so far about the Activity app.

This makes sense — the app is useless without a Watch. The app icon depicts the three rings of the Apple Watch’s fitness app. Each ring represents the amount of standing, walking and brisk exercise the user achieved in one day.

The leaked screenshots reveal that the app is very complete, including graphs over time of activity and the achievements attained by completing certain goals. The achievements appear to be depicted as flat outlines, whereas they are fully graphical videos on the Watch, however. It is possible that the full skeuomorphic medal will be visible on the iPhone, when you tap through.

It looks like a full representation of the Activity app from the Watch, but optimized for a larger phone display. Like the Apple Watch companion app, the interface has a black user interface and uses Apple’s San Francisco typeface. The Activity app also manages sharing activity and workout data with the Health app, so third-party developers can access the data with user permission.