Will the first generation Apple Watch become collectible? Or will your shiny new Apple Watch go the way of old iPhones and iPads in a year or two when the upgrade to a newer, likely more feature-filled model proves too hard to resist?

If Apple follows the release cycles of its other products, the Apple Watch could see at least a minor refresh every year and perhaps even a larger overhaul every other year, much like we see with Apple’s iPhones and iPads.

What might Apple’s second and third-generation Apple Watch collections look like? And what will that mean for owners of the current collection?

With a lot of help from our friend Antonio De Rosa of ADR Studios, we’ve envisioned what future versions of Apple Watch might look like based on supply chain chatter, watch trends, and our own intel on what Apple has in the works. 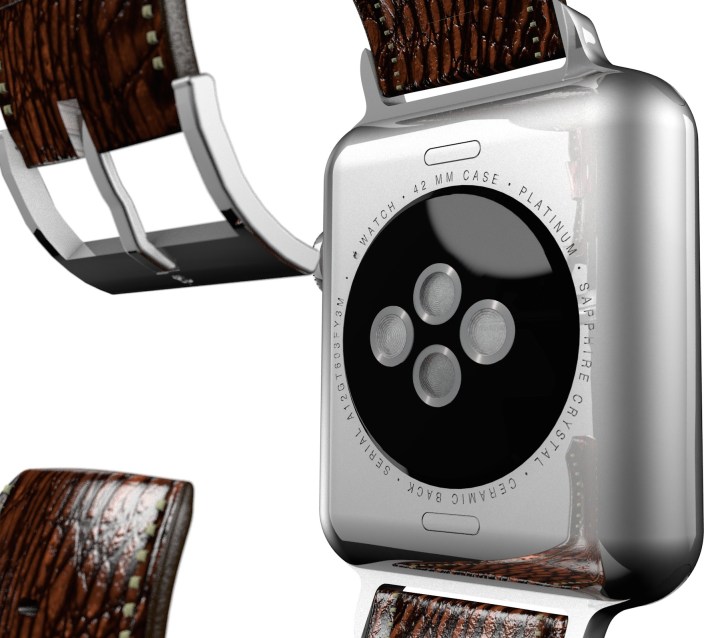 One of the most likely possibilities for a next-generation Apple Watch is new case materials. A report from The Wall Street Journal claimed Apple was experimenting with platinum versions of the Watch, which was later corroborated by info from usually reliable supply chain sources.

Other possibilities, if trends from the watch industry are any indication, could include titanium, ceramics, white gold or even Liquidmetal. A less expensive polycarbonate material like the plastic iPhone 5c or rubber-like fluoroelastomer material (like the Apple Watch Sport bands) is another option that could even lead to a lower price point for the entry-level collection.

So that’s what we’ve imagined in our Apple Watch 2 renders:

The colorful polycarbonate models (ab0ve) could let Apple hit a lower price point and reach new customers that view the entry-level $349 Apple Watch as a pricey iPhone accessory. The titanium model (below) could provide a new option in the Apple Watch collection, and the platinum model (also below) could be a new high-end Watch Edition collection that appeals to those that aren’t into gold but still want the luxury experience.

On top of updating the usual internals like the processor and other chips, Apple will likely look to include new sensors in the second-gen Apple Watch that will open up new possibilities for features. 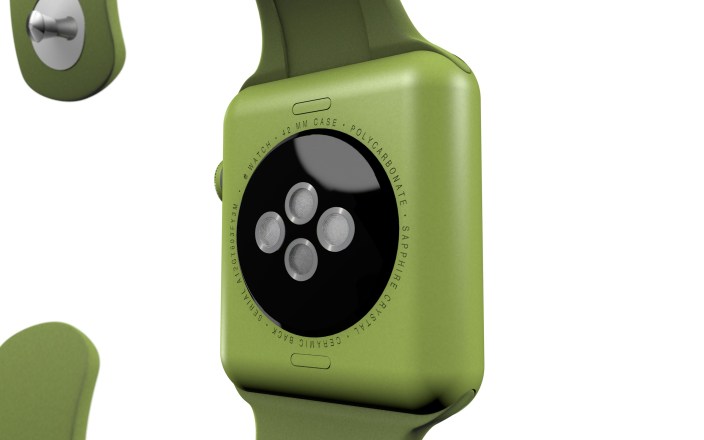 Apple’s Health app provides some clues to the health and fitness data that Apple might be interested in tracking with new sensors. Oxygen saturation data, for example, is something noninvasive products from accessory makers like Whitings already provide to the Health app. GPS features still require a connected iPhone.

And if Apple manages to dramatically increase battery life with the upgraded device, sleep tracking features are almost certainly in the works. We’ve reported extensively on Apple’s research into sleep tracking, including hires of some of the world’s foremost experts in the field, and it’s something a number of third-party accessory makers already offer via wrist-worn wearables, beside sensors, and other products that sync with Apple’s Health app. 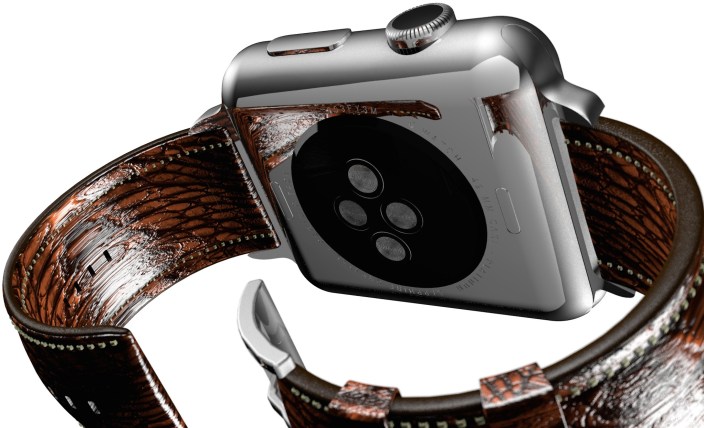 While more bands from Apple is a given as the company introduces new designs for Apple Watch, it’s possible Apple could open up an official third-party program, potentially through its MFi licensing program for accessories, giving companies access to specs for Apple’s proprietary slide-in mechanism for the straps.

For now, straps will require companies to build an adapter to work with Apple’s strap mechanism. One called Click, for example, is already taking preorders for an adapter that allows any traditional watch strap to work with the device.

But at this point it’s unclear what the third-party strap market will look like or if the big accessory makers will invest in these types of accessories before official support from Apple.

For now most already announced Apple accessories are docks, stands, cases and other non-strap products, and that market will likely remain a bit of a wild west for now. An official accessory program for straps, however, could be a standout feature for the second-generation Apple Watch.

The small green light you see on the display in the renders is a FaceTime camera embedded into the display. A smart watch might not be ideal for snapping photos apart from acting as a remote shutter for your smartphone camera, but a front-facing camera for video chat is one of the promises of the Dick Tracy-style smart watch experience that companies have yet to completely deliver. 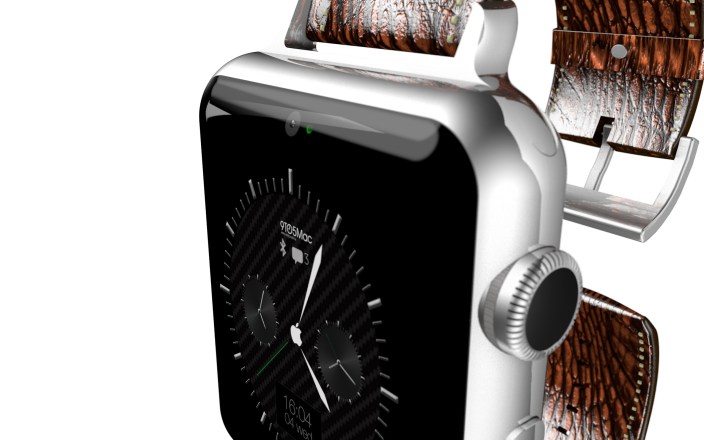 It’s not a sure thing for a second-generation Apple Watch, but the addition of a camera would certainly be a big selling point for owners of the original Apple Watch.

The big thing developers want from the next-generation Apple Watch (and possibly before) is a fully native SDK for developing standalone Watch apps; currently developers can only build WatchKit apps, glances, and send notifications, all of which require a connected iPhone to function. Apple already confirmed, however, that full-native Apple Watch apps will arrive later in 2015. 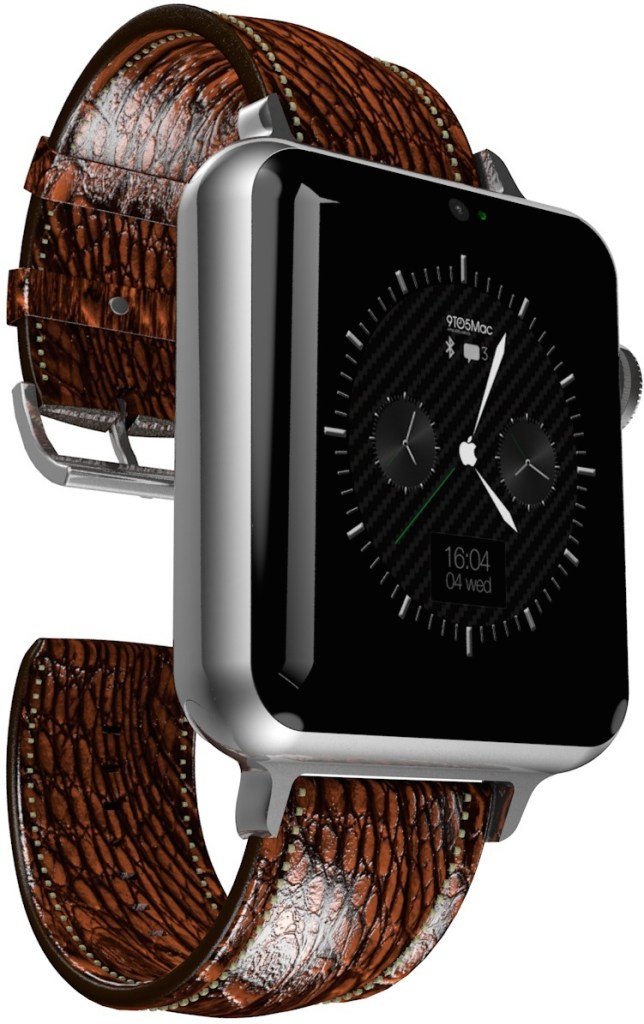 With the ability to build native Apple Watch apps, developers hope to gain more access to the device’s sensors and in the process develop apps that would ideally run without the need for a connected iPhone. For now, you can listen to up to 2GBs of music, track some fitness stats with the device’s heart rate sensor and accelerometer, and access a few built-in apps and Apple Watch functions. All third-party apps anything and requiring GPS needs a connected iPhone.

It’s likely that with the SDK Apple will start allowing third-party watch faces, something that is a standard feature on competing platforms like Pebble and Android Wear, but it’s possible Apple will look to improve battery life via hardware and software upgrades before doing so, meaning a full Watch SDK might arrive alongside a second-gen Apple Watch and not before.

Will Apple’s first collection of Apple Watches benefit from the collectibility that traditional high-end watches typically enjoy? That might depend a lot on what Apple plans to do with the next-generation Apple Watch collections. What remains to be seen is exactly how the pricier $10,000+ models will sell from year to year and if the first collection of Apple Watches might hold their value, or even increase for higher-end models, if next year’s designs are completely different.

While the device itself might become obsolete in a few years as Apple introduces new models with the latest hardware and software, Apple’s bands at the very least could benefit from collectibility. Unlike old iPhone cases, which usually don’t fit new iPhones as design changes are introduced, straps could if Apple maintains the same connection mechanism which is likely.

Apple’s bands could conceivably work with new Apple Watches for years to come, allowing bands from past collections to hold their value longer than current iPhone and iPad accessories.

Head below for a gallery of more Apple Watch 2 renders:

The Apple Watch renders in this post were created by ADR Studios for 9to5Mac. Antonio De Rosa, CEO of Socialmatic LLC, was the first designer to introduce the concept of iWatch (2010). With his design studio, ADR Studio, he’s created many Apple product concepts over the years.