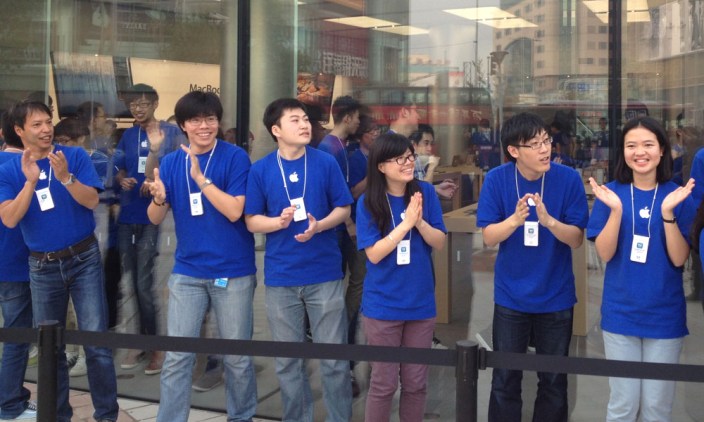 Regarding Apple Pay, Cook reiterated comments he has made in the past. The executive remarked that Apple “very much wants to get Apple Pay in China.” Previously, Apple has said to have been in negotiations with popular Chinese retailer Alibaba regarding a potential partnership. Cook has met with Alibaba executives in the past regarding the partnership, but nothing has been officially announced. “I’m very bullish on Apple Pay in China,” Cook said today.

Tim Cook also talked about the recent news of Apple passing Xiaomi in the China smartphone market. Cook remarked that it is “great news” to see Apple gaining traction in China and overtaking Xiaomi. During Apple’s Q2 earnings call, Cook announced that Apple sold more iPhones in China during the quarter than it did in the United States. “I think China is a market where everyone will own a smart phone,” Cook remarked today. An IDC report from this morning, however, claimed that the Chinese smartphone market is approaching its saturation point, but Cook does not seem worried.

While discussing Apple’s new environmental initiatives in China, Cook bragged that, “this area is one where we can make a significant contribution.” The Apple executive went on to reiterate that Apple’s main goal is produce its products in the cleanest and most environmentally conscious way, while not advocating.

“The environmental issue is very important in China. We don’t advocate, that is not our responsibility. By the same token, we focus on the manufacturing of the product, not just the final assembling, but all the way back to the raw materials. That’s the only way Apple can make an enormous impact on the environment.”

Apple’s focus on China has been apparent over the recent months with the company aiming to open more than forty retail stores in the country by mid-2016.