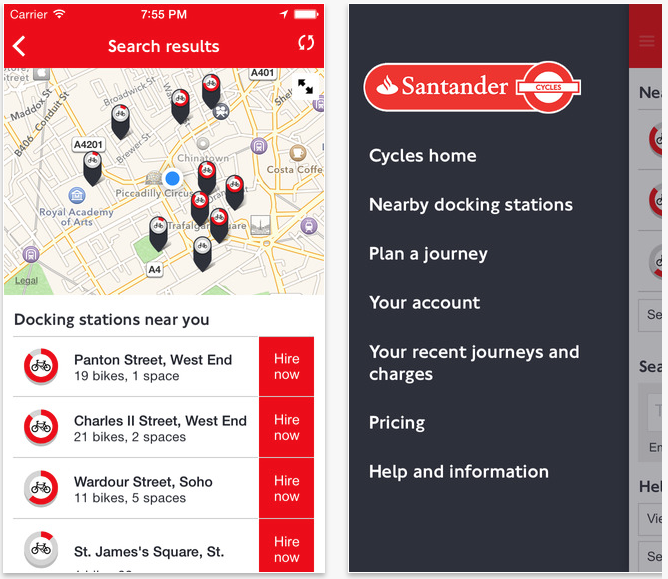 Cycling is definitely the fastest and most pleasant way to get around central London, and the large-scale cycle hire scheme – informally known as Boris Bikes, after Mayor Boris Johnson who launched the scheme – finally has an official app.

Named after the scheme’s new sponsor, the Santander Cycles App allows users to find the nearest docking station, check availability of bikes and obtain a release code to hire one. Transport for London has long made the data publicly available, allowing developers to create their own apps with limited functionality, but it’s taken five years to create an official app that allows you to hire the bikes.

There are more than 700 Boris Bike docking stations in London, with a total of 11,500 bicycles available. More than 10 million journeys were made by Boris Bike last year. Users pay £2 ($3) for a one-day membership, and can then make unlimited use of the bikes for journeys of up to 30 minutes each (which will pretty much get you anywhere to anywhere in central London).

The app is a free download from iTunes, and the full press release can be found below.

London’s newest red icon – Santander Cycles – today launched a revolutionary new App, making the cycle hire scheme easier to use than ever before.

The new Santander Cycles App for Android and iOS smartphones is free to download for both members and casual users. In addition to viewing the nearest docking station and bike availability, the new App is able to send a ‘bike release’ code straight to a user’s phone, which means they can hire a cycle without having to use the docking station terminal.

All customers need to do is register with their bank card, use the App to ‘hire now’ from a nearby docking station, and just tap the code into a docking point to release a bike for use.

‘The new Santander Cycles App will make finding and hiring a bike in our great Capital city even more of a doddle. The App is packed full of handy new features and is part and parcel of our plans to take the cycle hire scheme to the next level and encourage more people on to two wheels.’

‘This is just one of the exciting new developments we’re bringing to life with our new partnership with Santander. Together we’re working hard to make cycling an integral part of London life, so anyone can jump on a bike to get to work, the shops or discover the Capital. The new official Santander Cycles App will make hiring a bike much easier for both members and casual users by being able to find the nearest docking station and check how many bikes are available, and get an access code so you can just hop on and go without spending time at the terminal.’

‘We’re absolutely committed to growing and developing Santander Cycles together with TfL by making more bikes available, providing more docking stations and offering extra benefits in future to give Londoners and visitors to the Capital the best possible experience.

‘Since announcing our partnership in February of this year, we’ve already added 3 per cent cashback on cycle hire journeys for customers using their 1|2|3 credit card, and the App further demonstrates our commitment to making the cycle scheme more fun, rewarding and easy.’

The new red-and-white livery of Santander Cycles is already widespread across London and the transition is continuing at pace as docking stations and distribution vans are rebranded.

Santander Cycles is the second-largest cycle hire scheme in Europe, and since it was introduced in 2010, around 40 million journeys have been made using the bikes, making it a popular and affordable way to travel around London for work or leisure.

Usage of the scheme rose by a quarter last year and is at a record high, with more than 10 million journeys made in 2014. Customer satisfaction is also at an all-time high, with over 80 per cent of members intending to renew their membership.