Review: Macphun’s Noiseless is the affordable photo noise killer that will save your grainy pictures 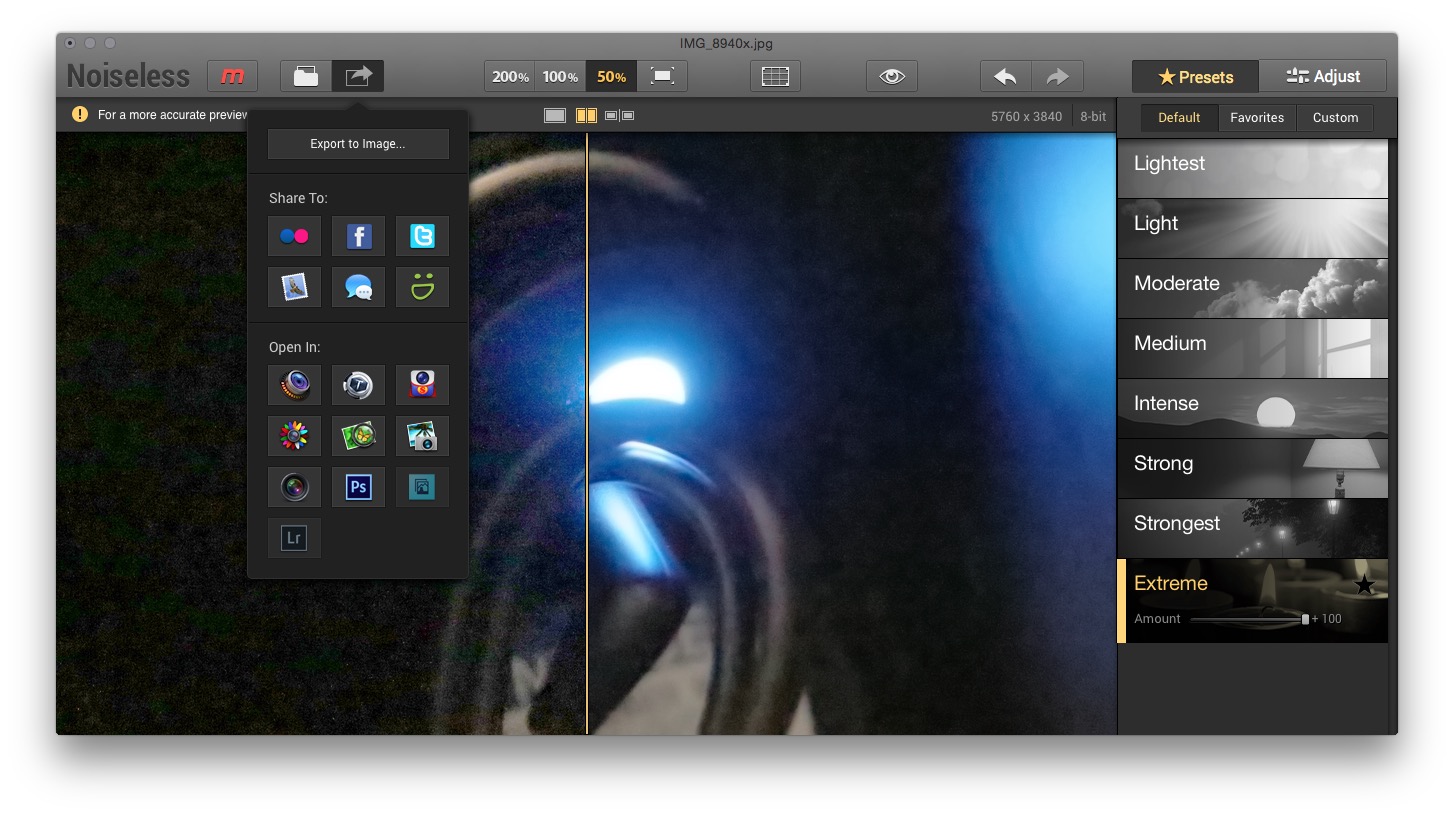 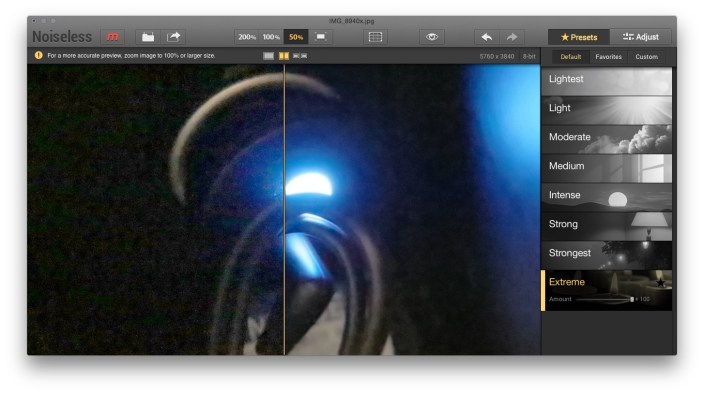 As a serious photographer, I do as much as I can to make my daily shots excellent, using cameras with low-noise sensors and fast lenses — then trying to keep them as steady as possible in low light. But even the latest and best cameras can’t snap perfectly clean images in dark surroundings. Grainy noise is basically inevitable in darkness, and the more basic the camera you’re using, the more likely it is to appear in a wider variety of pictures. To reduce noise, you can either shell out thousands of dollars for new camera gear, or try to fix your noisy photos with software.

Having spent years trying to fix noisy photos with software, including the noise reduction filters included with fully-featured photo editing applications such as Adobe’s Photoshop, I can tell you that the results typically aren’t great. Unless you’re willing to invest in an expensive noise-reduction plug-in, you’ll spend a lot of time trying to clean your image up, and it probably won’t be beautiful when you’re done. So when I learned about MacPhun’s Noiseless ($18), an app designed to do only one thing — eliminate noise — I was simultaneously skeptical and intrigued. Given that standalone noise-reduction apps often sell for 4 to 8 times as much, could an affordable single-purpose app meaningfully improve some seriously messed-up photos? The answer is “yes,” and at a far lower price than buying a comparably noise-free camera… 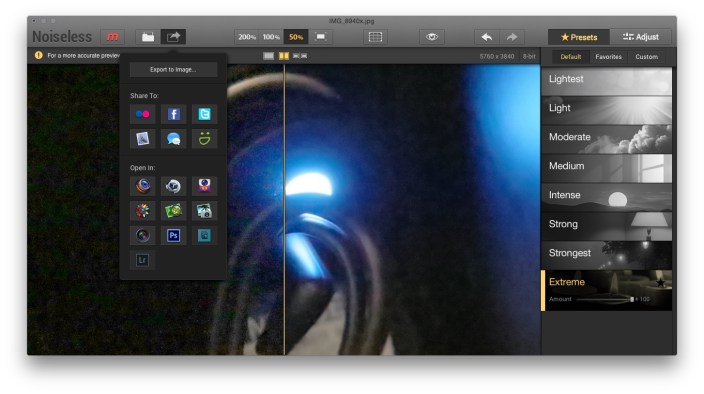 There are two critical elements to Noiseless’s appeal: its dead-simple user interface, and its price. The UI is designed to be extremely straightforward, initially presenting you with your choice of a bisected version of the photo you select — old noise on the left, cleaned up on the right — or a before and after comparison using the same split window pane. 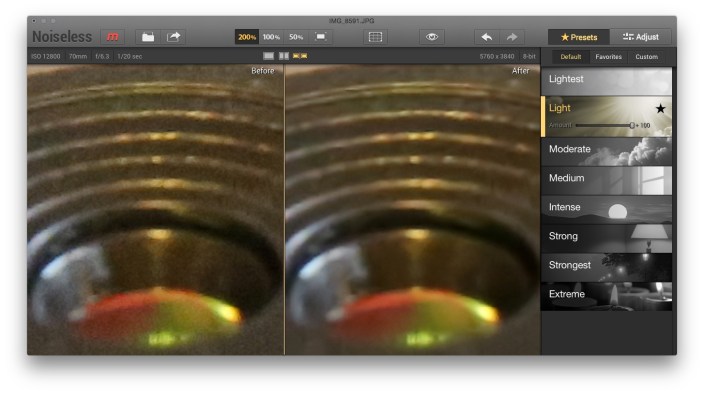 All of the app’s key settings are on the right side of the window, and Macphun makes the default adjustments very easy to figure out. It presents you with eight different lighting scenarios your photo might have been taken in, ranging from pitch black darkness (“extreme”) to super bright light (“lightest”), letting you choose the one that seems best-suited to the image. You then get a slider that moves from 0 to 100, applying a combination of effects to preserve as much detail as you prefer. If you don’t want to dive any further into the settings, the defaults let you achieve dramatically better results, as shown in the two full-sized sample images below. 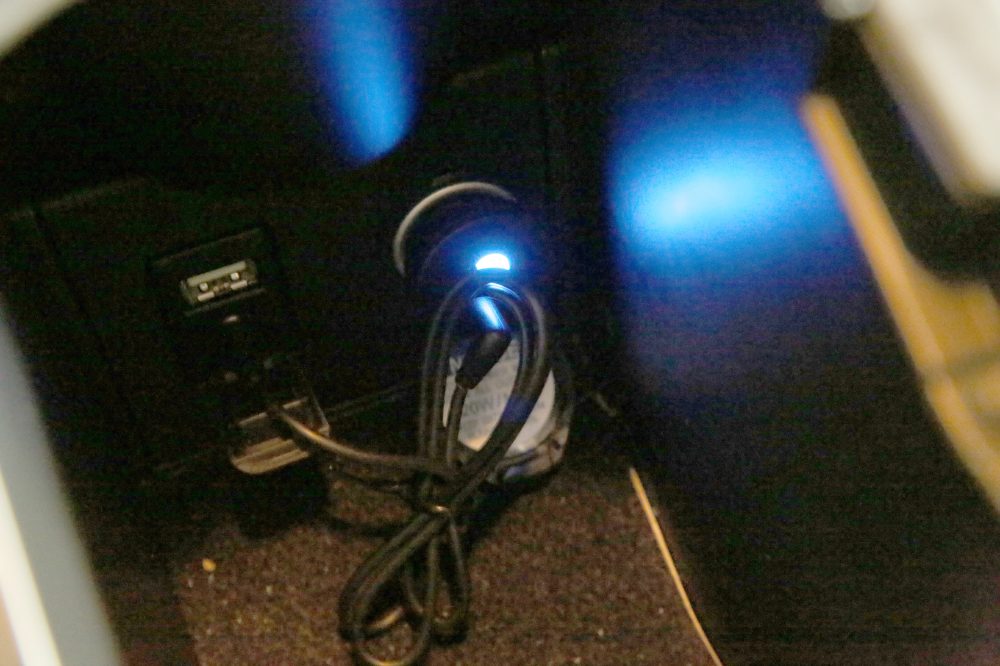 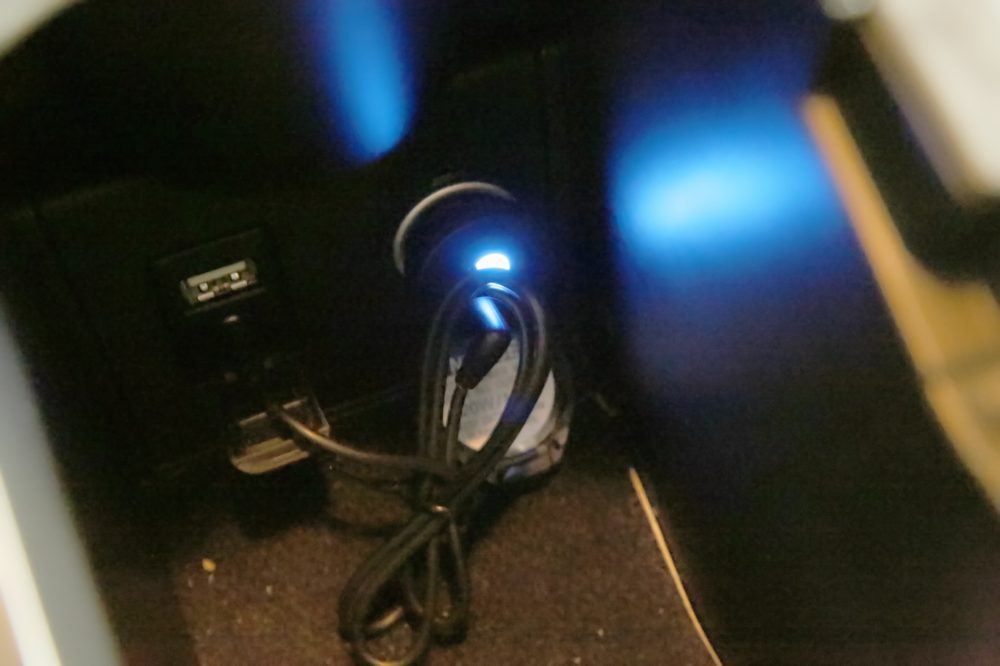 Click on Adjust, however, and the simple default presets are replaced by a more complex panel that provides granular controls over noise reduction, structure (sharpening characteristics), filtering (highlight/midtone/shadow/detail), and the opacity of the noise-reduced image. You may find that small tweaks preserve more of the pixel-level detail in your original image, or do a better job of blending splotchy noise away into the shadows. 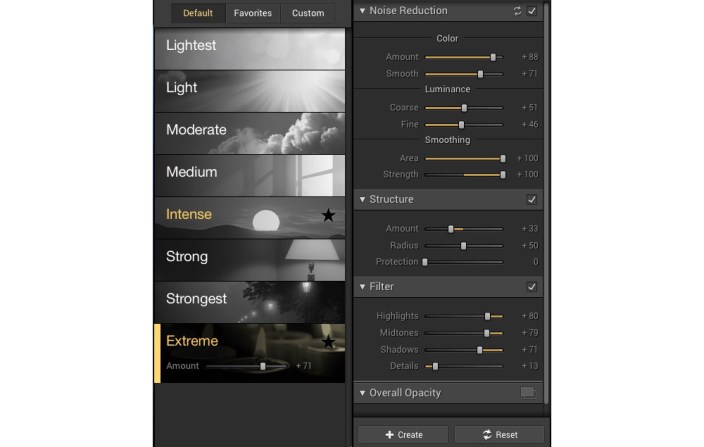 If you contrast Noiseless’s tool with Photoshop’s Reduce Noise filter, you’ll find Noiseless’s UI and results to be markedly better. Although it shouldn’t be hard to smooth out noise, Photoshop’s “basic” interface does very little for large photographs, and its “advanced” interface leaves it to you to sort through separate red, green, and blue channel noise reduction filters. No average user will want to take the time to figure the advanced per-channel interface out, let alone achieve great results with it. 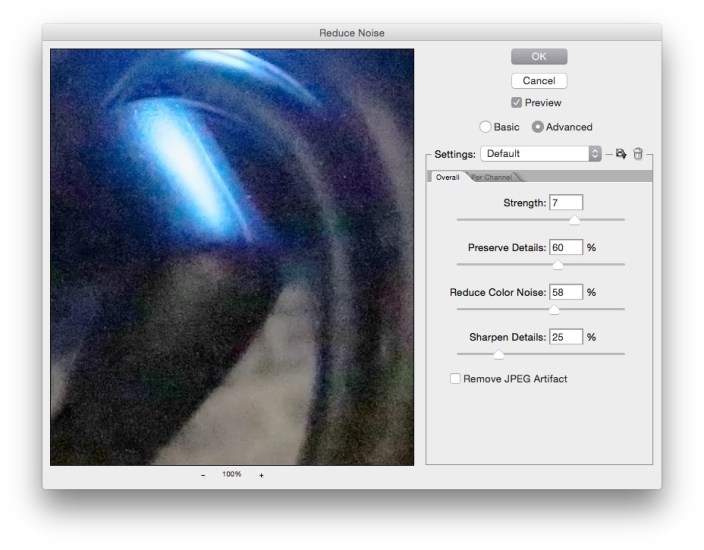 You can see the difference between Photoshop and Noiseless yourself below (click on the full-sized images and consider downloading them for deeper comparisons). Photoshop’s Reduce Noise filter does in fact “reduce the noise” a little, but Noiseless effectively eliminates it. While the Noiseless image could be brightened a little to bring back some lost detail in the shadows, or adjusted with settings to preserve more detail in the first place, the Photoshop image’s coarseness isn’t fixable without resorting to other, better tools. Rival noise reduction apps such as Topaz DeNoise and PictureCode’s PhotoNinja sell for $80 to $150, prices high enough to deter a lot of people from possible purchases. 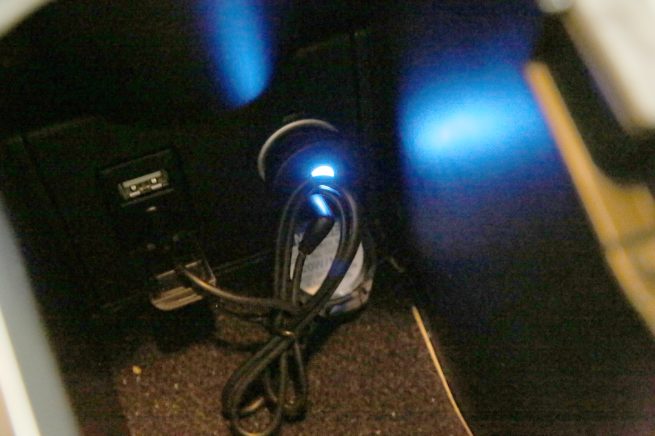 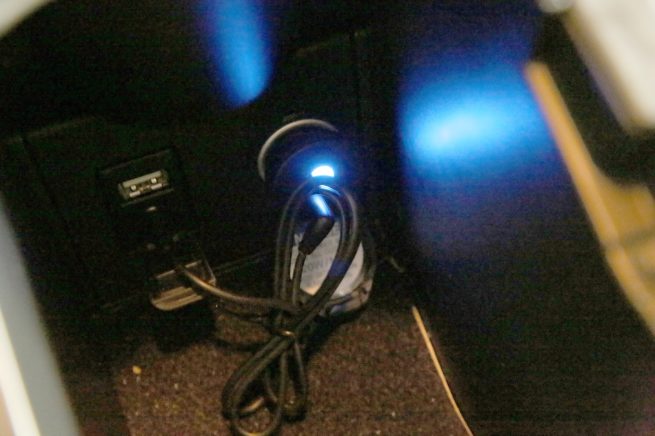 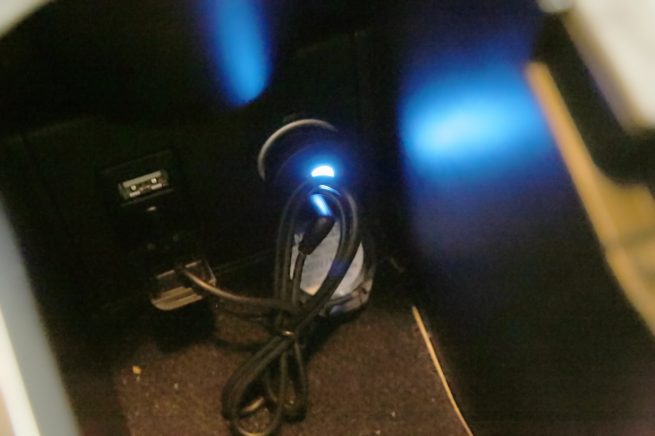 That’s the other key thing about Noiseless: the price. While there’s certainly some demand for professional-class, high-end noise reduction solutions for use with expensive DSLRs, there’s arguably an even larger group of people who would be willing to pay a smaller amount for an easy-to-use, effective noise reducer that works with their pocket cameras and iPhones. 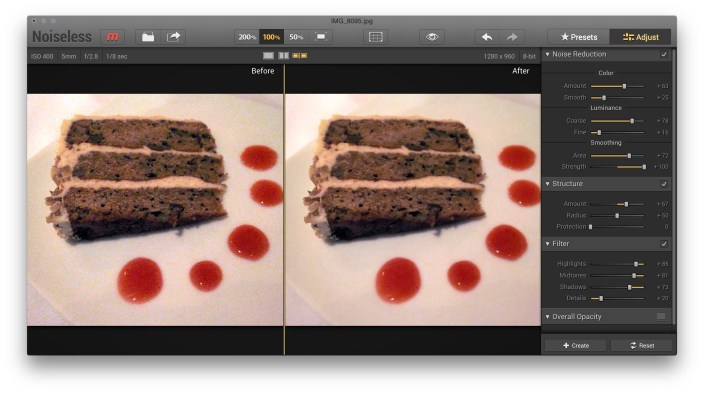 Noiseless is certainly a great tool for the latter audience, and will satisfy quite a few people in the former, as well. The image below was snapped with an iPhone 4 and had virtually all of its noise removed just by selecting a lighting profile and moving a slider around. 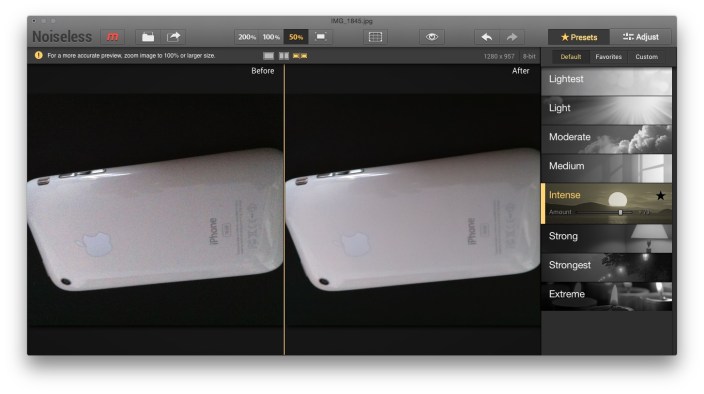 Here’s one more set of large, clickable examples that show off what Noiseless can do with an image full of noise. Be sure to click on the images to see the difference; it’s striking. 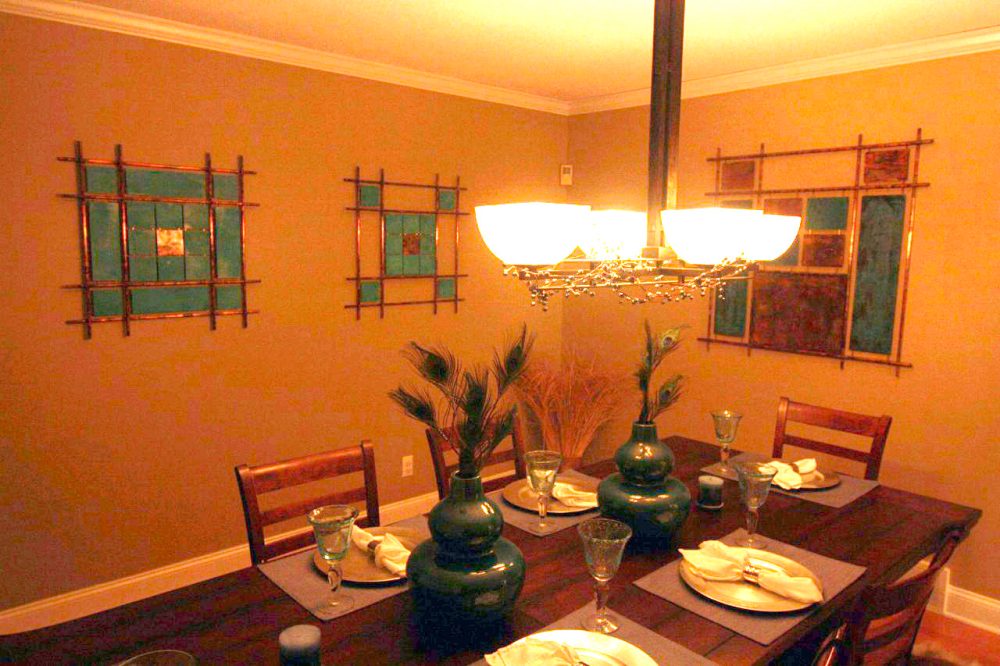 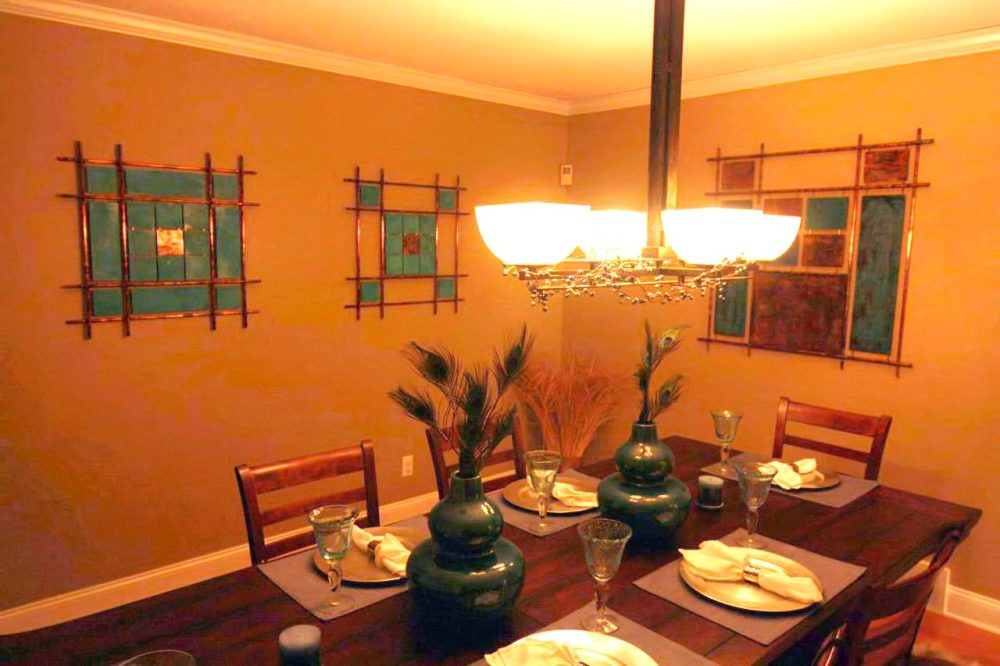 At the current $18 asking price, I’d consider Noiseless to be an easy recommendation to mainstream photographers: it’s easy to use, more powerful than some of the professional photo editing tools I’ve tested, and certainly makes grainy photos look 100 times better than they started. It’s not a cure-all app and can’t fix motion blur, improper focus, or color issues — all of which you may encounter when snapping low-light images — but if you commonly shoot images that are sharp and noisy, you’ll love the improvements Noiseless will deliver. If the app’s price goes up as its Mac App Store description suggests that it might, you’ll have to decide whether the extra dollars are worth paying for a good solution.