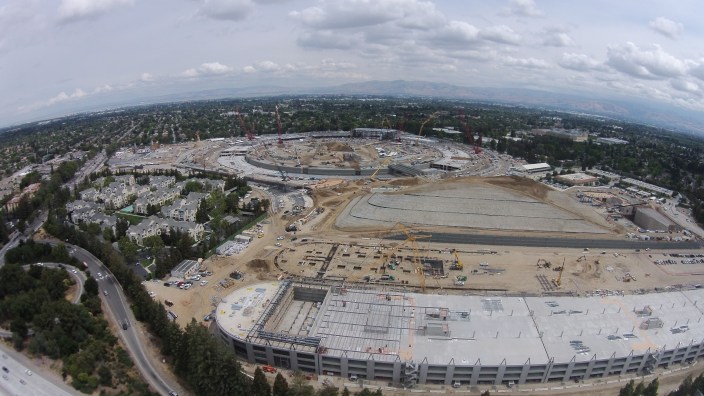 In addition to getting a look at progress made on the site since our last update, the video gives us a look at Apple’s new $160 million auditorium that will hold around 1,000 people and likely become the site of future Apple product unveilings and press events. Back in 2013 we got a glimpse at what the venue will look like once complete via some official mockups from Apple’s architect Norman Foster.

Here’s Apple’s plans for the building next to the currently under construction auditorium shot by MyithZ over the weekend:

Most of the auditorium is underground, as noted in Apple’s blueprints above, so when complete you’ll actually only see the Apple Store-like glass structure on ground level pictured in the mockup below:

Head below for the full drone flyover video to check out the auditorium and much more:

We’ve been tracking progress of the project in our Campus 2 construction timeline, adding monthly and sometimes weekly updates of drone flyovers, official aerial shots shared by Apple and City of Cupertino, and news surrounding the project. If Apple sticks to its current general construction timeline, it will complete construction by the end of 2016 and presumably begin the process of moving in the approximately 12,000 employees that the 176-acre site will house.