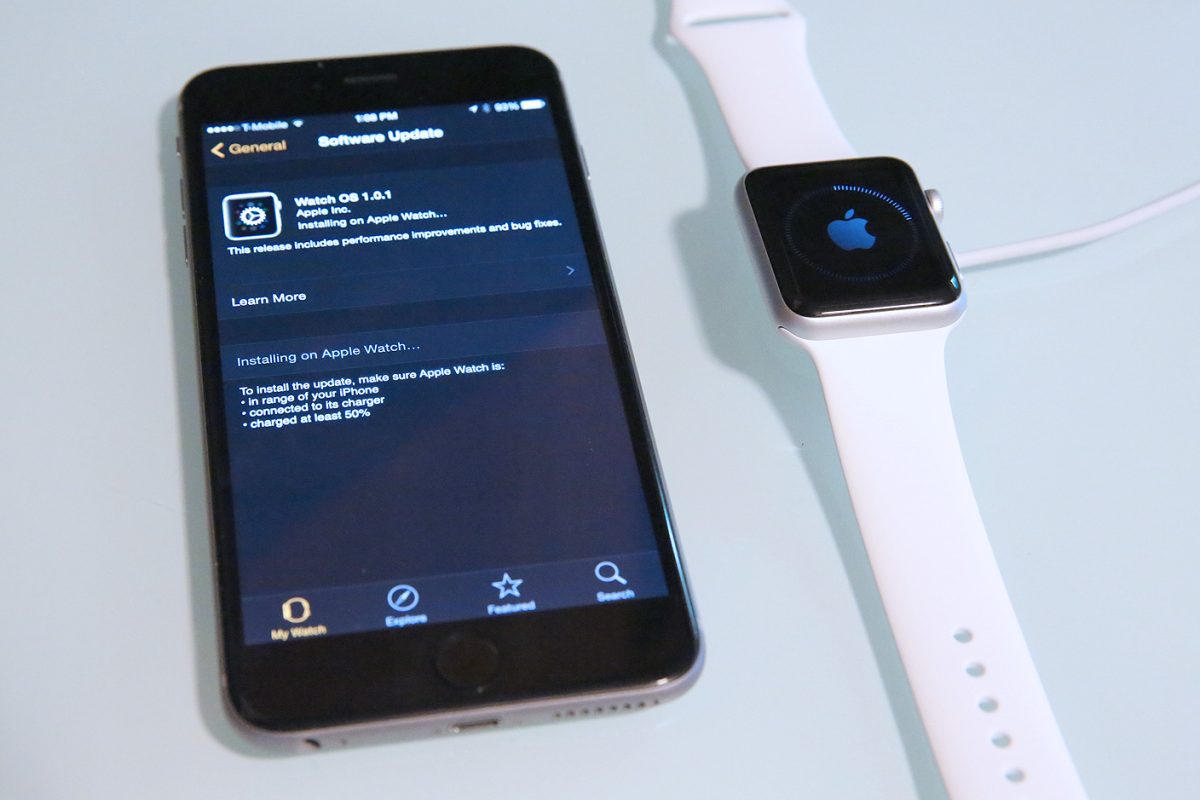 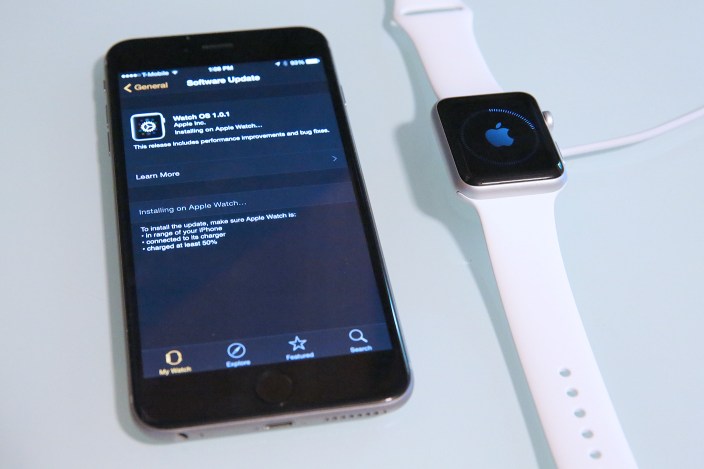 The Apple Watch received its first official software update today, giving lucky early adopters their first opportunity to see how the Watch OS updating process works. Unlike the iPhone, iPad, and iPod touch, which can update themselves using iOS’s Software Update feature, the Apple Watch depends upon an iPhone to download the update from Apple’s servers and install it on the Watch. You’ll also need a Wi-Fi network, your Apple Watch charger, and at least 50% battery life in order to do the update.

Here are the full details… 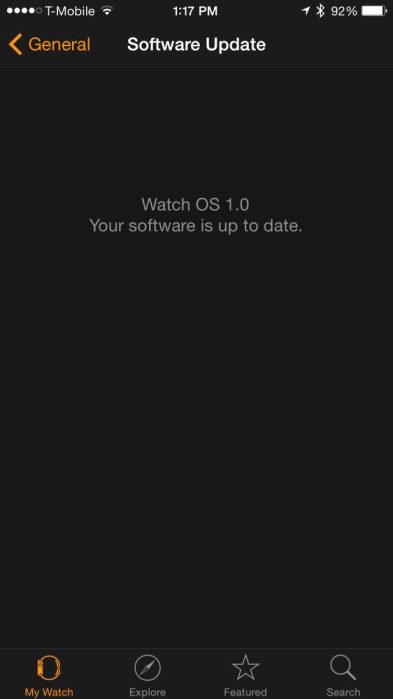 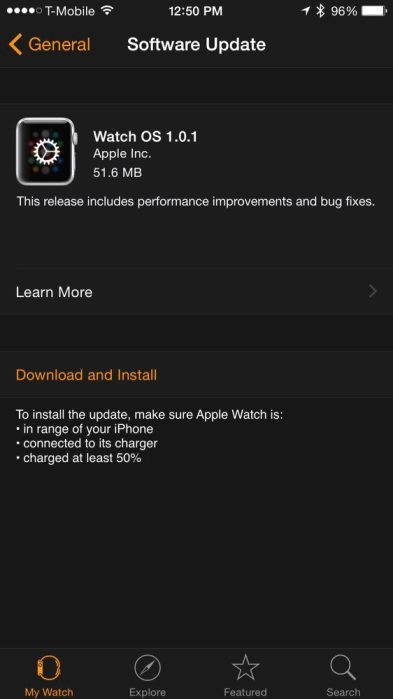 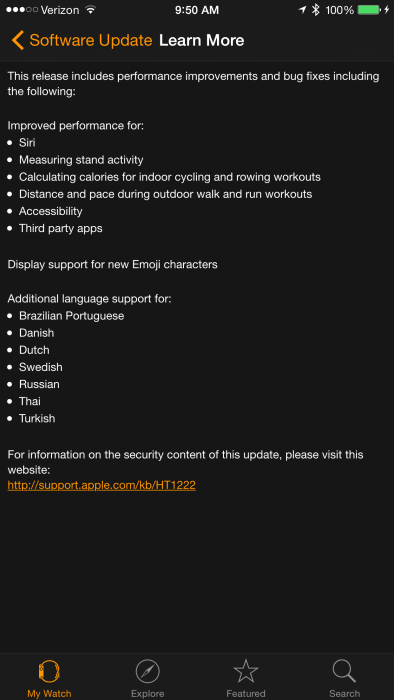 Unlike iOS devices, which are updated using the Settings app, the Apple Watch is updated through the iPhone’s Apple Watch app. Under My Watch > General > Software Update, you’ll either see a screen indicating that your Watch’s current version of Watch OS is up-to-date, or an installation screen similar to the one for iOS updates. Instead of spinning gears, you’ll see an Apple Watch icon with one large, stationary gear inside, plus the name and size of the update. You can hit a Learn More button to read what’s new in the update, or begin the installation process right away.

The first update Apple offered is Watch OS 1.0.1, and as always, it needs to download from Apple’s servers before you can install it. Version 1.0.1 was a relatively small 51.6MB download, but moved slowly. (When I attempted to switch the iPhone to cellular, the app put up a notice that the installation process would only continue over Wi-Fi. Some people have apparently been able to download the update over a cellular connection, but Wi-Fi is definitely required when the Apple Watch itself is updated.) 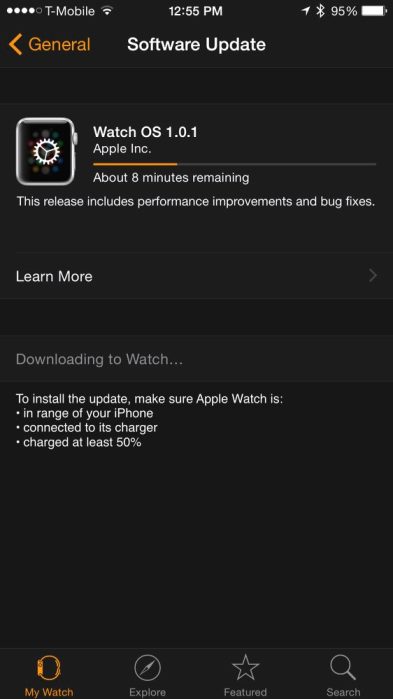 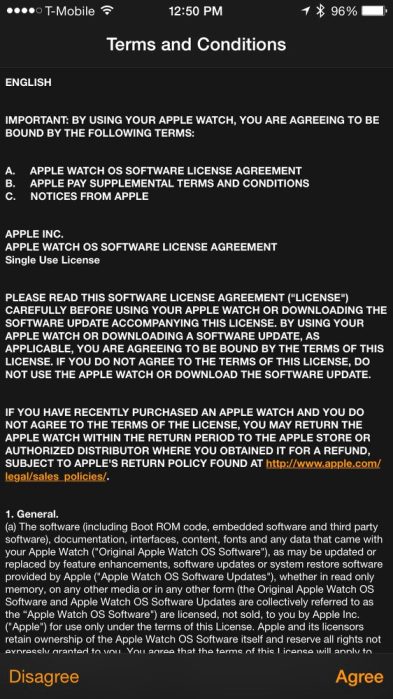 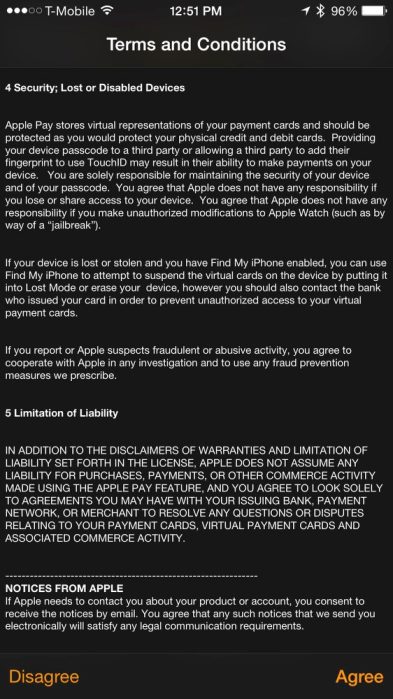 Hitting the “Download and Install” button brings you to a terms and conditions document that needs to be accepted. If you agree to accept it, the small download begins, and could (surprisingly) take up to 10 minutes depending on how busy Apple’s servers are. 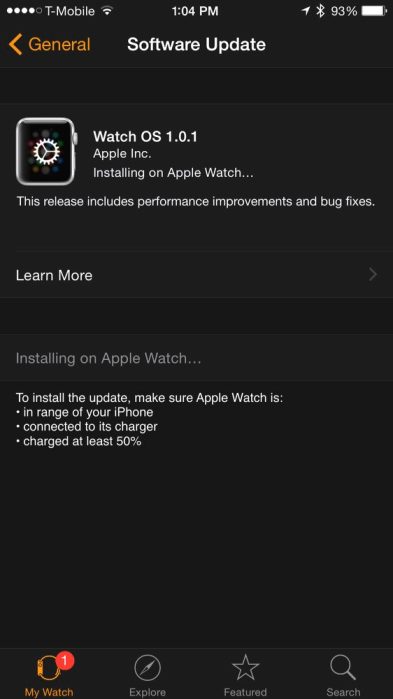 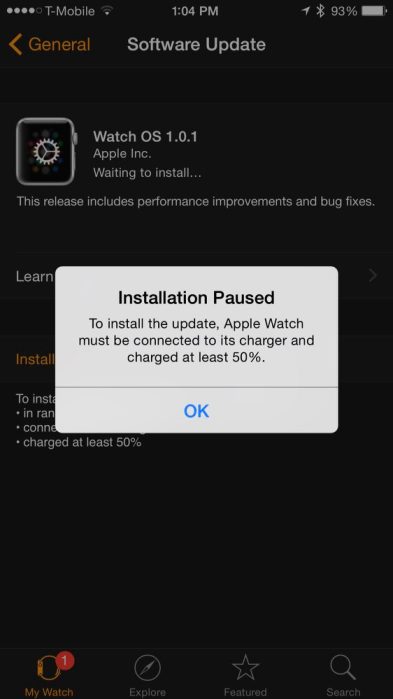 Once the download is complete, you’ll need your Apple Watch charger — and your Apple Watch at least half-charged — in order for the update to begin. The app will not start the software update process until your Watch is in range, connected to the charger, and at 50% or greater power. (Noted for future reference: if you’re expecting a Watch OS software update, carry your charger around or plan to wait until later at night to install it.) 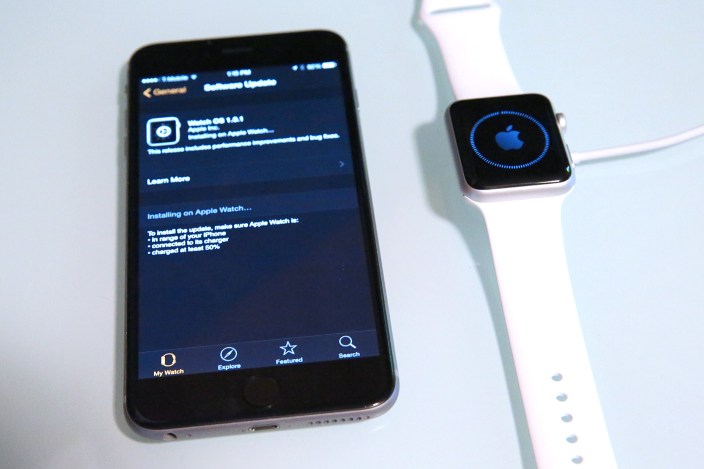 At that point, your Apple Watch screen will switch from bright to black, then re-awaken in a dimmed state with the Apple logo centered within a progress circle of gray dashes. After five long minutes of turning gray dashes into white ones, the screen will go black again, only to return with the same logo and gray progress circle. This time, the circle will rapidly fill up, requiring roughly two minutes to go all-white, likely verifying that everything went properly during the update process. You’ll then be left with an Apple logo on a black background as the Watch resets one last time. 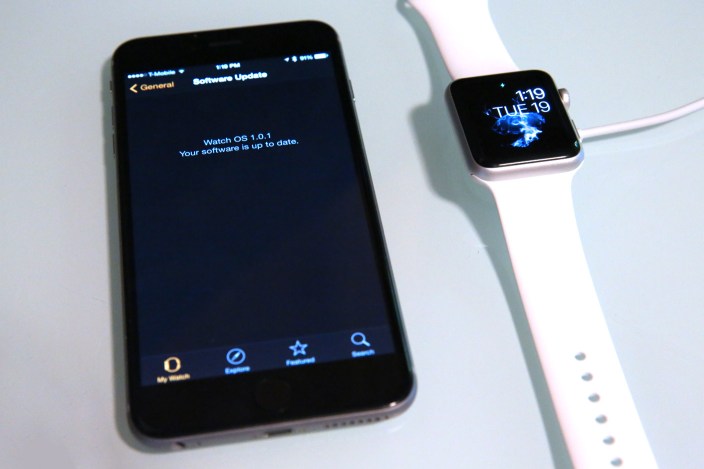 Once the Apple Watch had completed its first progress circle, my iPhone came up with a screen saying that the Watch was up-to-date with version 1.0 of its software. If this happens to you, don’t worry — your Watch is fine. It’ll complete the update as expected. 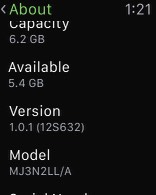 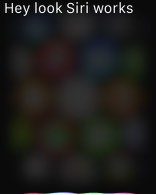 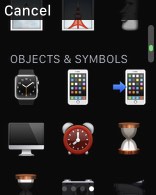 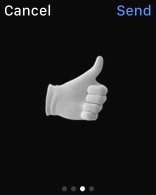 For Watch OS 1.0.1, there was nothing obvious on the screen after the update process to indicate that anything had changed. Only the Version number under Settings > General  > About indicated that the Watch was updated to 1.0.1, and the iPhone Apple Watch app confirmed as much.

To make the most of your Apple Watch, iOS devices, and Macs, I’ve written quite a few How-To and Best of guides, as well as reviews of worthwhile accessories. Read more of my guides and reviews for 9to5Mac here (and don’t forget to click on Older Posts at the bottom of the page to see everything)!