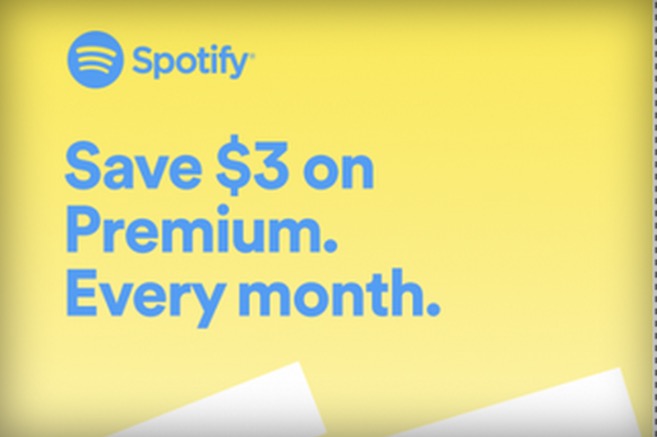 Faced with a direct challenge from Apple Music, rival Spotify will contact App Store subscribers to its Premium music service to suggest that they switch to $10/month web billing rather than $13/month iTunes billing, reports The Verge. Spotify is marketing the switch as a way for Apple users to save $3 per month on its Premium service, giving Spotify a greater ability to compete with Apple Music’s $10/month offering.

Earlier this year, Spotify was said to have instigated American and European Union antitrust investigations into Apple, claiming that music labels were being pressured by Apple to end deals for free, ad-supported streaming music services ahead of Apple Music’s launch as a paid service. Spotify has complained that Apple’s 30% “tax” on rival services gives it an unfair advantage over competitors in the App Store.

According to the latest report, an email planned by Spotify will note that “the normal Premium price is only $9.99, but Apple charges 30 percent on all payments made through iTunes,” explaining the higher price of in-app Spotify subscriptions. The email will then offer users a tutorial on shutting off iTunes auto-renewal and transferring their accounts to Spotify’s web site, including a “Happy-Go-Lucky” playlist for dancing with the “bit of extra cash in your pocket each month.” As the strategy of contacting customers outside of the App Store to offer the lower-priced subscription option is not prohibited by Apple, rdio has used a similar tactic, noting the lower web subscription price in its FAQs.