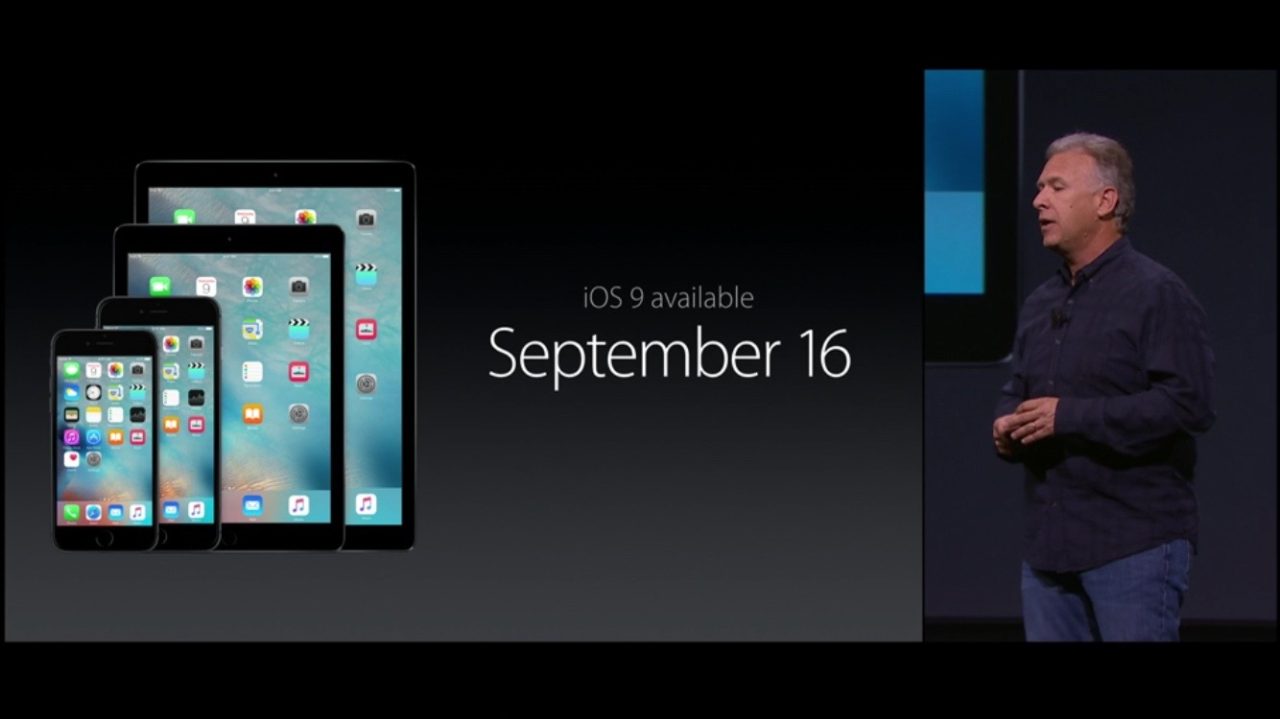 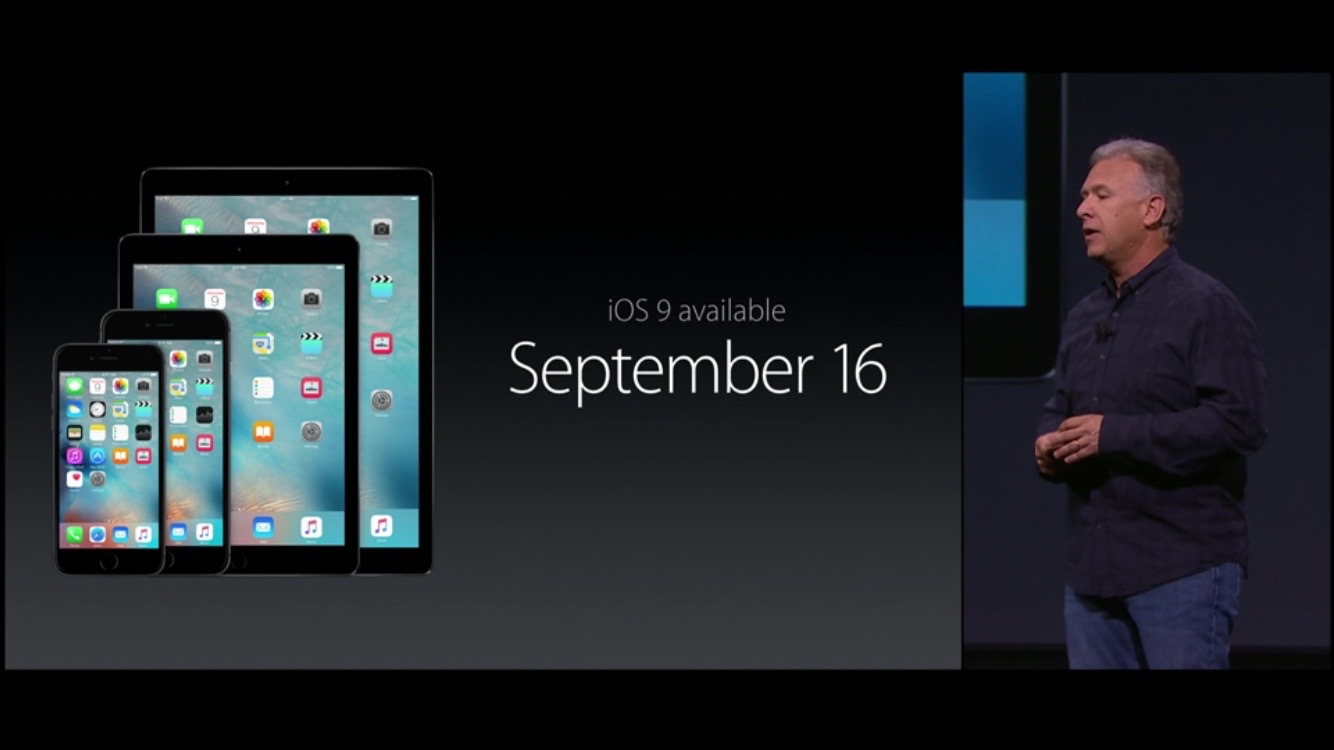 Apple shared today that the upcoming iOS 9 software update for iPhone, iPad, and iPod touch will be released to everyone in one week on September 16th. Alongside the official iOS 9 release date, Apple also introduced new price tiers for iCloud storage upgrades.

Currently in the United States, upgrading from the free 5GB iCloud adds 20GB to 1TB depending on the tiers which range from 99¢ to $20: 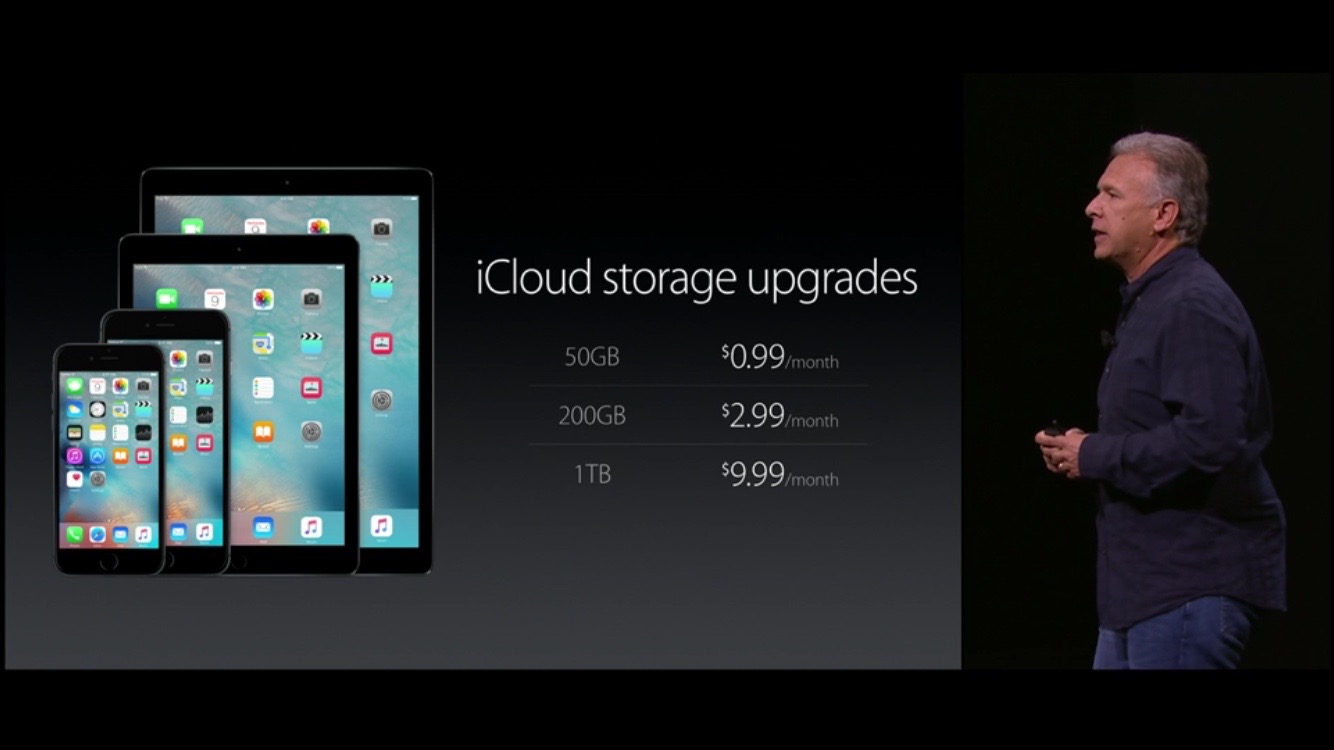 The way you interact with iPad gets even better with iOS 9, thanks to new multitasking features that let users view and interact with two apps at once, side by side. With Picture-in-Picture, users can play video while browsing the web, composing email or using other apps. Built-in apps become more powerful with a redesigned Notes app offering new ways to capture ideas, detailed transit information in Maps, and an all-new News app for the best news reading experience on any mobile device.

“iOS 9 is packed with intelligence that makes every experience with iPhone and iPad even more powerful — Siri can do more than ever and new proactive assistance helps you get more done before you ask, all while protecting users’ privacy,” said Craig Federighi, Apple’s senior vice president of Software Engineering. “With iOS 9 we focused on strengthening the foundation of iOS with a deep focus on quality, and with the help of more than one million users who participated in our first ever public beta program, we’re excited to release the best version of iOS yet.”

Intelligence In iOS 9, every experience with iPhone gets even better, with new intelligence that works behind the scenes to present the right information at the right time. Proactive assistance presents the most relevant information at a given time of day and suggests actions at that particular moment based on the apps you use frequently and the time of day you use them. Siri features an all-new design, contextual reminders based on time and location, and new ways to search photos and videos. Search queries deliver more relevant results from more categories, including sports scores and schedules, simple math calculations, weather conditions and stock prices.

iPad Experience iOS 9 delivers new multitasking features designed specifically for iPad that allow you to do even more: Slide Over lets you simultaneously work in a second app without leaving the one you’re in and easily switch between your apps. Split View allows you to view and interact with two apps at the same time, side by side, and resize your view to prioritize one app over another. Picture-in-Picture lets you continue a video or FaceTime® call while using your favorite apps. Typing is faster and easier with an all-new Shortcut Bar that displays convenient editing tools, and new Multi-Touch™ gestures make it even easier to select, edit and move text.

Built-In Apps The powerful built-in apps on iPhone and iPad are designed for all your essential, everyday tasks. In iOS 9, we’re delivering a completely redesigned Notes app, support for transit in Maps, an all-new News app and new capabilities in Apple Pay™.

The completely redesigned Notes app includes the ability to draw a quick sketch using your finger, easily create checklists to keep track of your to-dos or snap a photo directly in a note. Important items can be saved directly to the Notes app from other apps and are kept in sync across all your enabled devices with iCloud®.

Maps adds support for metropolitan transit systems and schedules, and subway station entrances and exits are precisely mapped. When you plan your trip, Maps can offer a combination of trains, subways, buses and walking, and presents you with what’s nearby, delivering options for local food, drinks, shopping and more.*

News delivers a reading experience that combines the rich, immersive design of a print magazine with the interactivity of digital media. News can learn your interests and suggest relevant content that’s easily shareable or saved for later, and delivers the best articles from more than 50 publishers, representing hundreds of titles from the world’s most influential news, sports, business and magazine brands, covering over one million topics.**

Apple Pay adds support for Discover, merchant rewards programs and participating store-issued credit and debit cards. Shoppers will be able to manage their cards in the new Wallet app.

Foundation This latest release makes the foundation of iOS even stronger with refinements including battery optimization that provides a typical user with an additional hour of battery life, and a low-power mode to further extend battery life.*** Software updates require less space to install and the Install Later feature can perform updates to your device when it’s not in use. Enhanced security features in iOS 9 keep your devices and Apple ID secure by strengthening the passcode that protects your devices and improving two-factor authentication by building it directly into iOS, making it harder for others to gain unauthorized access to your Apple ID. iOS 9 apps and the user interface now take advantage of Metal™ to deliver faster scrolling, smoother animation and better overall performance.

Availability iOS 9 will be available beginning Wednesday, September 16 as a free software update for iPhone 4s and later, iPod touch 5th generation and later, iPad 2 and later and iPad mini™ and later. Some features may not be available in all regions or all languages. For more information visit www.apple.com/ios.

*Transit information in Maps is available in select major cities, including Baltimore, Berlin, Chicago, London, Mexico City, New York City, Philadelphia, the San Francisco Bay Area, Toronto and Washington D.C., as well as over 300 cities in China, including Beijing, Chengdu and Shanghai. Nearby information is available in the US and China. **News app availability varies by country. ***Battery life depends on usage and settings.