Apple has today announced updates to the entire iMac family. Most notably, the company has brought Retina to the 21.5 inch iMac range, with 4K resolution displays. Apple has also dropped the non-Retina 27 inch iMacs, so they feature 5K displays across the board. The new iMac displays include faster processors, upgraded graphics, improved wider color gamut and two Thunderbolt 2 ports. The new iMacs have launched alongside updates to the Magic Trackpad, Magic Mouse and keyboard.

Details about the new iMacs has been slowly leaking over the past few months, so their debut comes as no surprise. Apple SVP Philip Schiller described the new hardware as ‘stunning’, in a press release.

“From the first iMac to today, the spirit of iMac has never wavered — deliver the ultimate desktop experience with the latest technologies, gorgeous displays and cutting-edge designs,” said Philip Schiller, Apple’s senior vice president of Worldwide Marketing. “These are the most stunning iMacs we’ve ever made. With our gorgeous new Retina displays, more powerful processors and graphics and all-new Magic accessories, the new iMac continues to redefine the ultimate desktop experience.”

Note the distinction between fifth and sixth-generation processor architecture. This means that only the 27 inch iMacs feature the latest Skylake Intel chips.

Apple is heavily promoting the 4K display in tandem with the iPhone 6s’s 4k video camera. Seeing as the new Apple TV is not 4K, Retina iMacs is one of the few ways users will be able to see their iPhone 6s videos at full resolution in the Apple ecosystem. You can do everything from the iMac: import clips from the iPhone, edit using Final Cut or iMovie and then play back your video at its full resolution on the Retina Display.

Apple is also changing up the Fusion Drive configuration options, to make it more affordable. You can choose a Fusion Drive that pairs a 1 TB hard drive with 24 GB of flash memory for fast application and data cache. A higher end 2TB and 3TB HDD with 128 GB SSD is also available.

The new 4K and 5K iMacs are available today online as well as Apple retail stores and select resellers. Every new iMac comes bundled with the new Magic Keyboard and Magic Mouse. The Force Touch Magic Trackpad is available as an optional add-on accessory.

Alongside the updates, Apple has also posted a ‘Then and Now’ iMac memorabilia page which shows the development of the iMac over time and celebrates the growth of Apple over that period. The new iMacs are 366x times faster and feature 1000x more RAM than the flagship iMac from 1998. The page concludes with a reaffirmation of Apple’s promise to continue progress in desktop computing: “1 unwavering commitment to craft the ultimate desktop computer.” 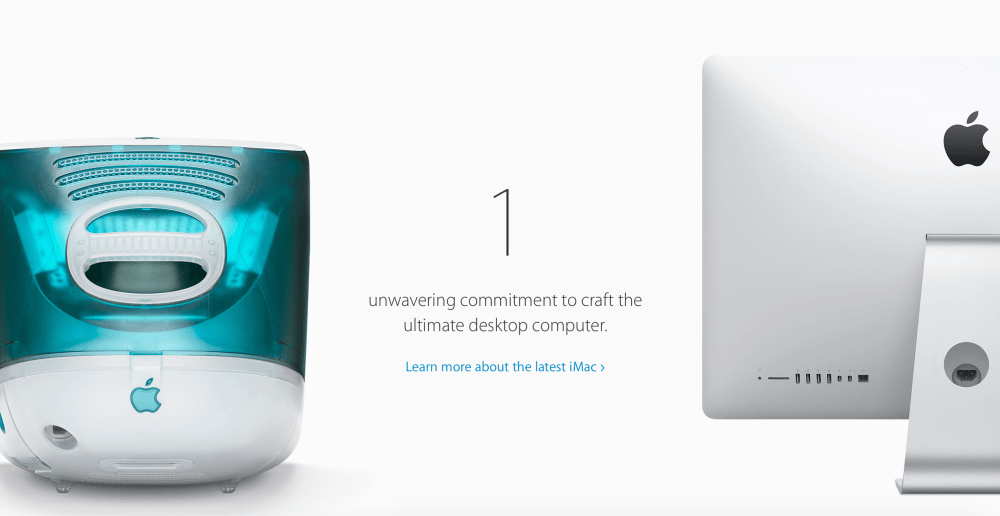