Review: Nanoleaf Ivy, a HomeKit lightbulb made from a foldable printed circuit board 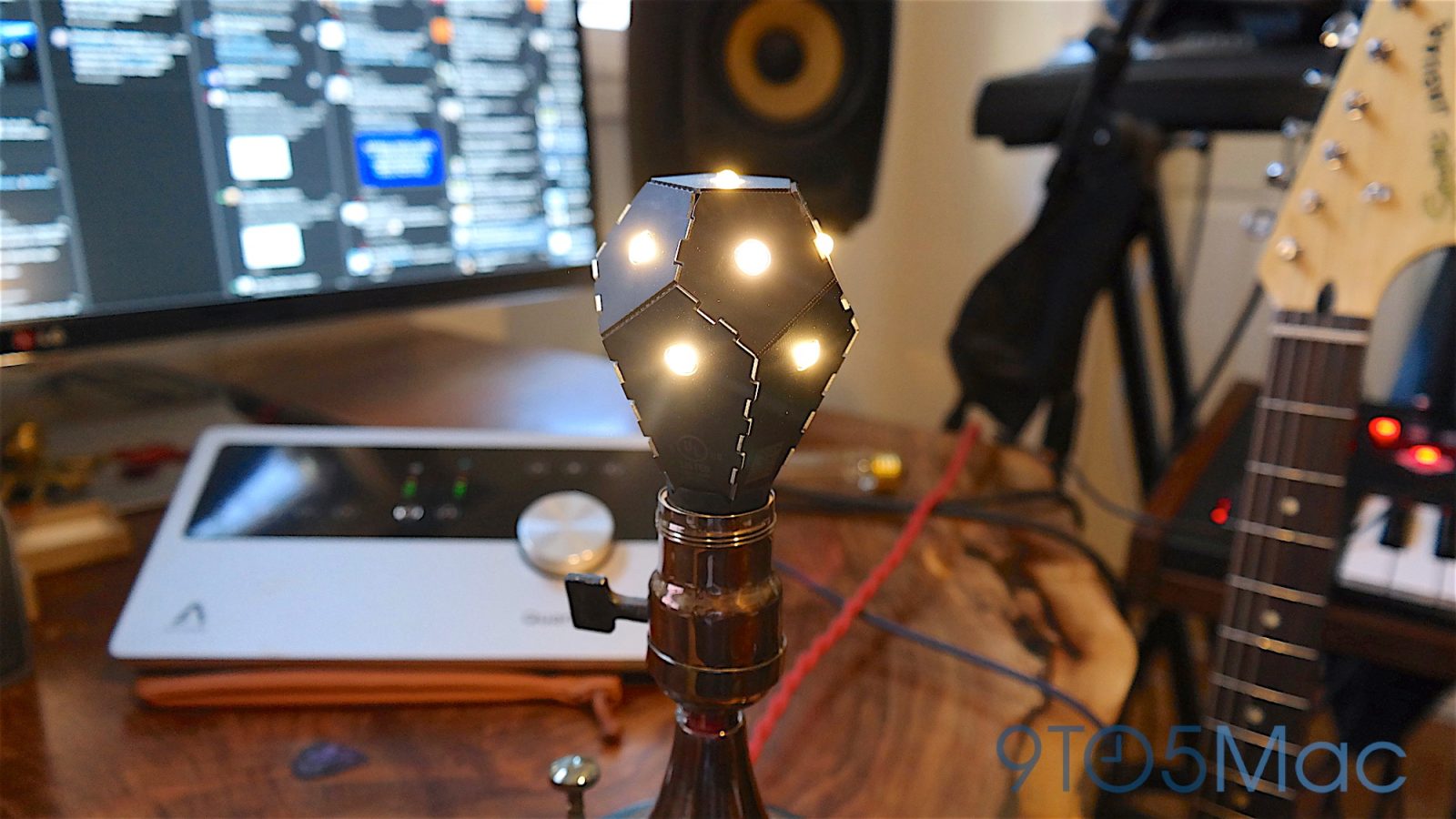 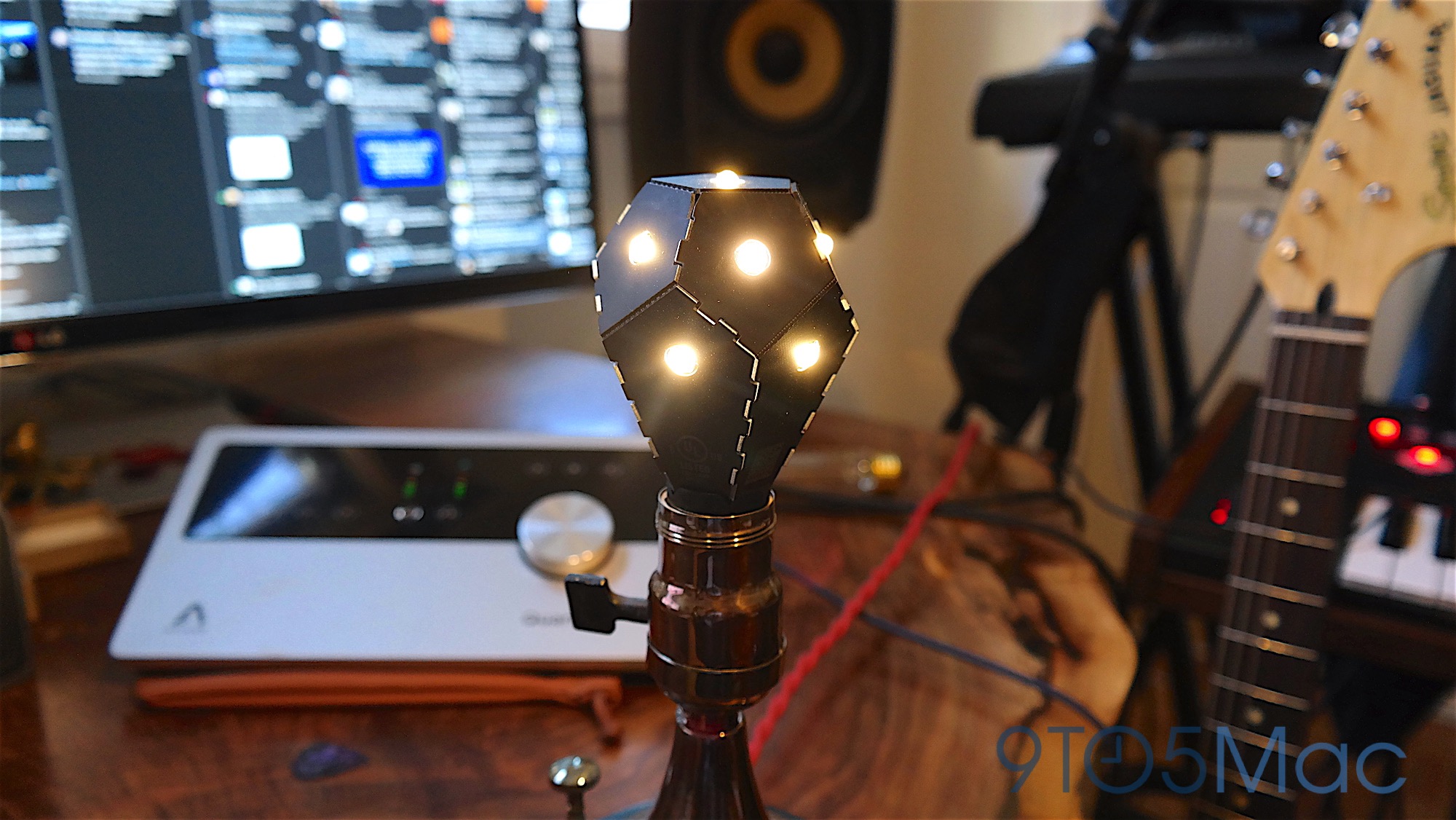 The new Nanoleaf Smarter Kit with HomeKit support comes with a Smart Hub and two Nanoleaf Smart Ivy Light Bulbs to get you started. Like other popular connected lighting systems including the Philips Hue, you can purchase more bulbs individually once you’ve bought the Smarter Kit with the hub that allows a wirelesses connection for control from your iPhone or iPad and support for connecting up to 50 bulbs (the standard limitation among these types of products). But the Nanoleaf Ivy bulbs have a lot to offer in a package unlike anything else I’ve tested. The bulb is made entirely from a foldable printed circuit board with embedded LEDs…

Immediately noticeable is the unique design of the Nanoleaf. It’s made of a flat foldable printed circuit board that folds into an almost-lightbulb-shape with eleven flat sides where individual LEDs are mounted. It makes for a super futuristic look that I quite liked, and the hub too includes a Dodecahedron-inspired shape. Hue and others quickly start to look like your Grandpa’s lightbulb, and likewise the hub’s design won’t make you want to hide it out of sight like the other guys’ bulbs. The build quality of the bulb itself overall feels solid, which is something I thought might not be the case due to the origami, puzzle-piece design with the printed circuit board.

The all black color of the bulb and the design in general might be a bit too out of the ordinary for some, however, especially if you’re looking for bulbs that go into a fixture without a shade covering the bulbs. It’s certainly not a traditional look. 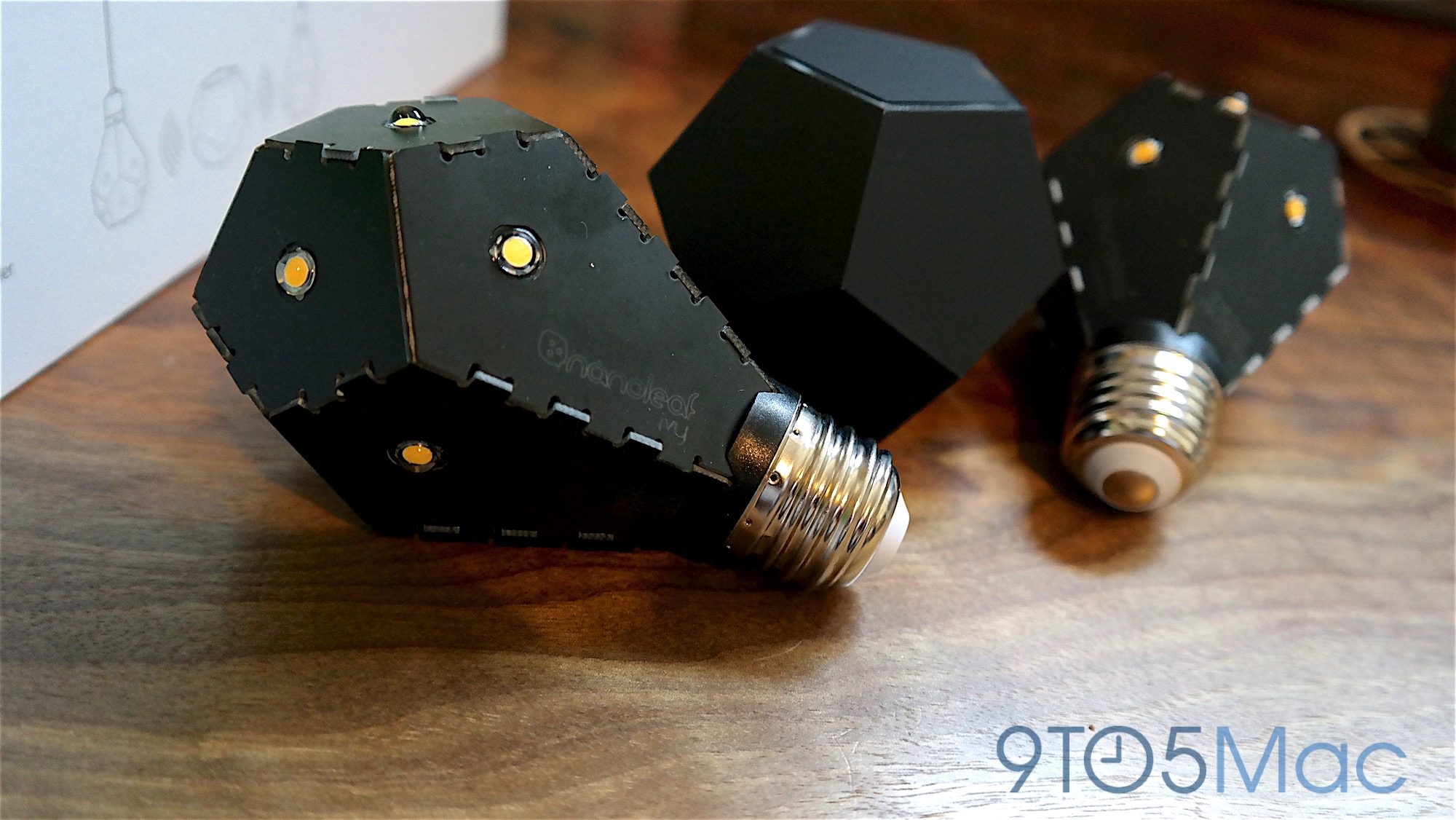 The company says the new Nanoleaf Ivy bulbs use around 7.5W to produce light equivalent to a 60W incandescent bulbs and will last up to 27 years. In my tests, using the bulb in the desk lamp pictured throughout this review, the light was blindingly bright at 100% and felt a lot brighter than a standard 60W incandescent bulb, but that’s certainly not a bad thing given you get full control over dimming (more on that below).

Setup is pretty standard, although it uses the Zigbee protocol, opposed to Wi-Fi or Bluetooth, and the hub will need a direct connection to your router using an included Ethernet cable. After you’ve screwed in the bulbs and connected the router, you can download the companion app for iPhone and iPad, hit a button on the hub to initiate the setup, scan a barcode on the hub, and follow a quick and easy configuration in the app.

You essentially only get control over the brightness of the bulb, but the Nanoleaf Ivy has a few unique features mostly courtesy of HomeKit support. But even before getting into the app and HomeKit, the bulb has a unique dimming feature that doesn’t require HomeKit or the app. When on, a double tap of the on/off switch for the bulb will make it start dimming while another double tap will set it at the desired brightness. It’s a handy feature to quickly set the brightness in a room with Ivy bulbs without having to grab your phone.

The lights get 50m signal coverage, and in my tests didn’t prove to have any reliability issues like many of the Wi-Fi connected home automation products I’ve tested. Perhaps thanks to Zigbee. 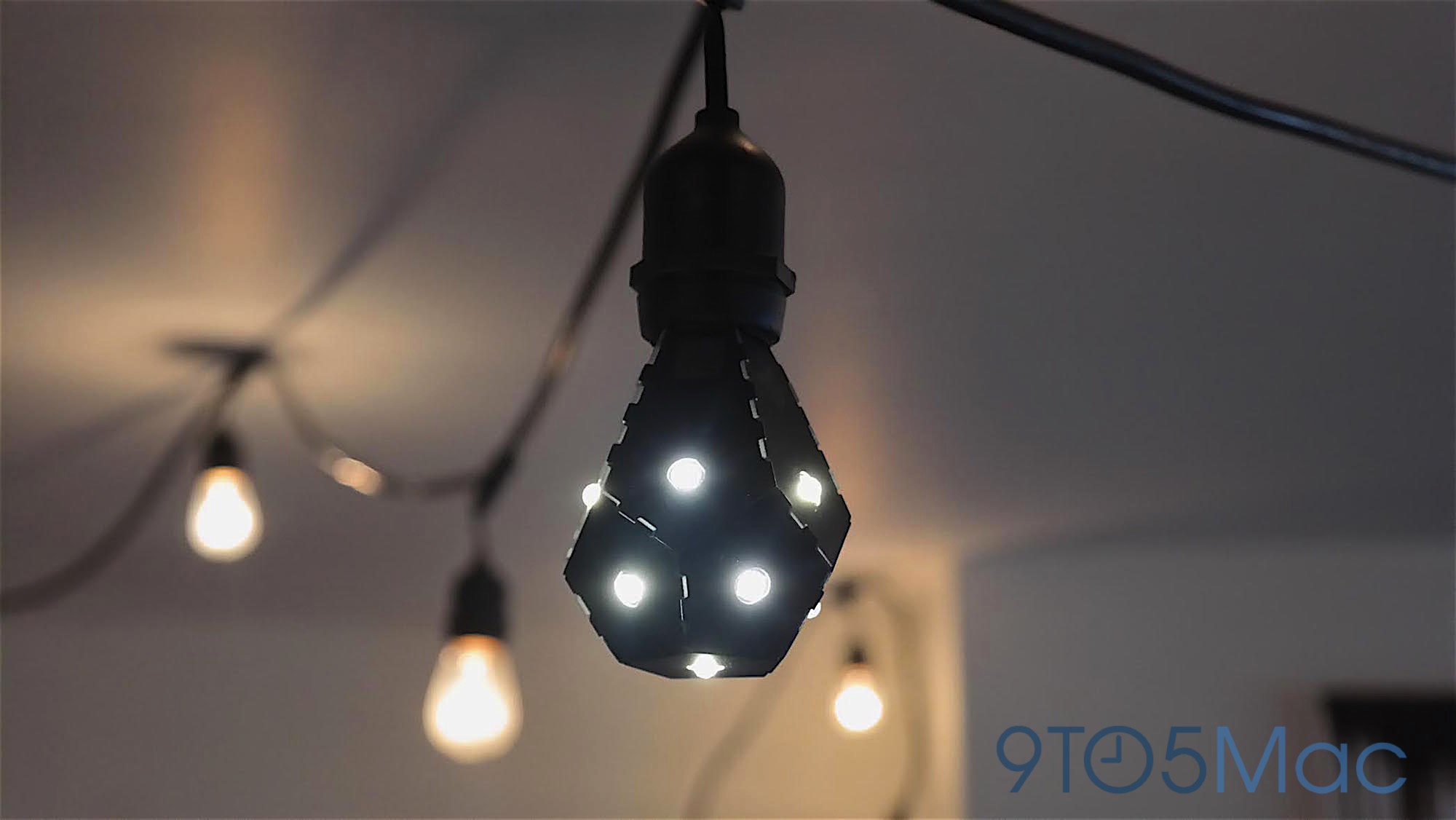 And because of Zigbee, it also works with other competing bulb products including Philips Hue, Osram Lightify, GE Link and Cree Connected. so you easily integrate your current setup or expand with other bulbs in the future. And you’ll be able to use any HomeKit compatible app to control the bulbs.

Even with using Zigbee, the hub builds in the ability to talk with Apple’s HomeKit, its platform for allowing Siri voice commands to control home automation products. Apple allows rival platforms like Zigbee to communicate with HomeKit via a bridge, and Nanoleaf Ivy takes full advantage to offer all of HomeKit’s functionality…

Because the product supports Apple’s HomeKit platform, that means you get access to Siri voice controls and the ability to setup what Apple refers to as “Rooms” and “Scenes”. In fact, those are the only ways to control the Ivy bulb using your smartphone.

The app doesn’t include much beyond HomeKit, but there is a virtual on/off button and brightness controls within the Rooms feature. Otherwise everything is done with Siri or the physical light switch connected to your bulb.

You can tell Siri to turn the lights on or off, set the brightness to a certain percentage (for example 100% or 10%), or you can ask it to initiate a Scene or Room. Scenes are setup for things like “Dinner” or “Movie Night” to automatically set lighting for a specific occasion, while Rooms allow you to group bulbs together to control a specific group of bulbs with a single command. You can view, setup, and initiate Rooms and Scenes from the app, but that’s about it.

The bare minimum app features, or rather the reliance on HomeKit, would be more of an issue if HomeKit wasn’t in my experience typically the better way of controlling these products. And it’s also easy to get features you’re looking for through another third-party HomeKit app, while the Smarter Kit’s firmware is upgradeable and will likely see additional features added in the future (Android support is planned).

You’ll be able to control the bulbs when out of your house, but keep in mind HomeKit requires an Apple TV for remote control access. 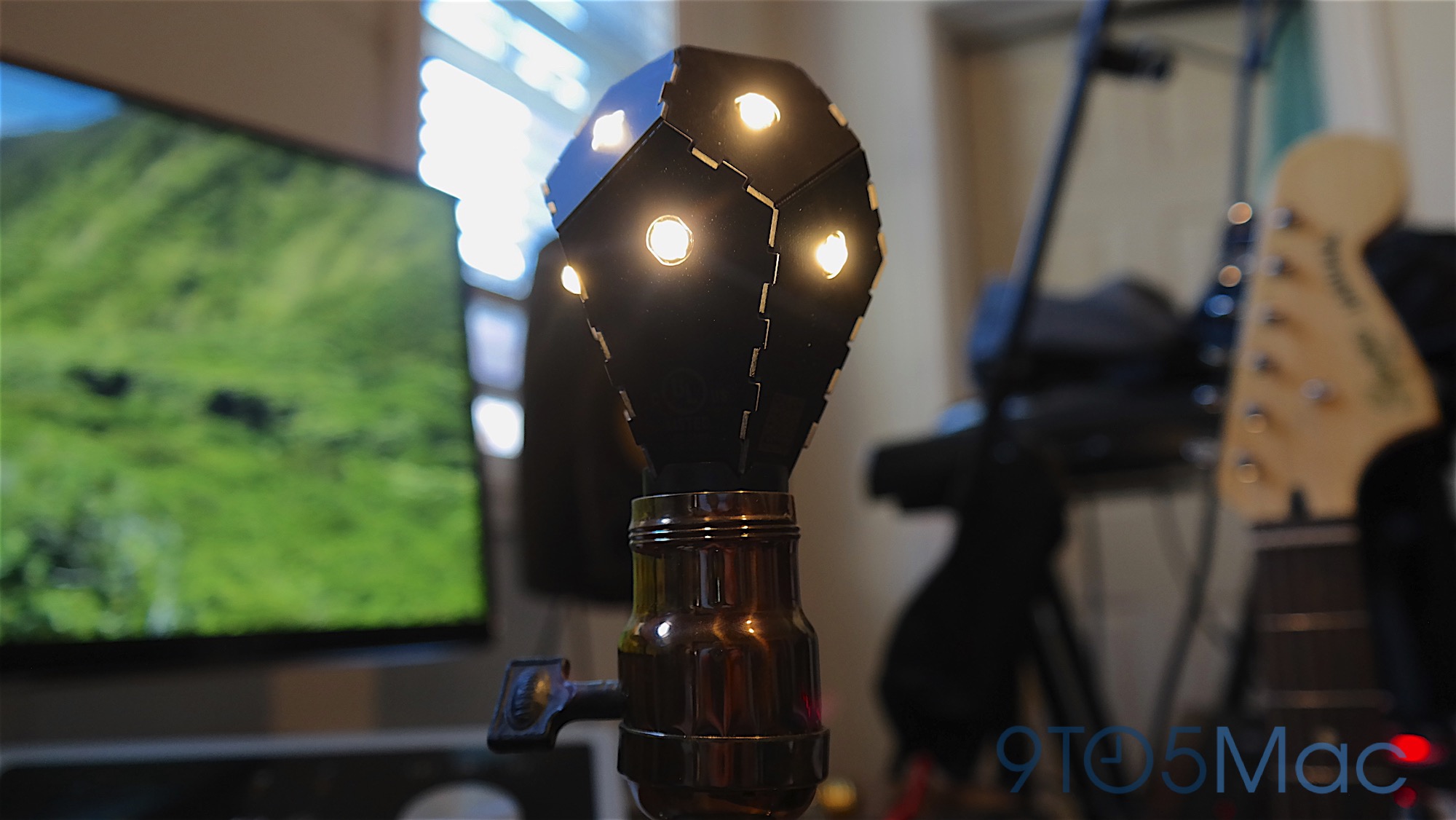 The company doesn’t have a color adjustable bulb yet (which means you can’t get that super warm amber glow that some like), and that’s probably the biggest downside of the Ivy. But in my use cases the full control over dimming from 1% through 100% is enough to set the mood in most situations.

The company originally launched on Indiegogo in October and surpassed its goal of raising $40,000. This week it’s officially launching with the first orders being shipped to preorder customers and the new Nanoleaf Smarter Kit going up for sale at retailers and online.

The Nanoleaf Ivy is by far the most interesting connected, HomeKit lightbulb I’ve had in for review, and at $99 for the Smarter Kit ($24.99 for individual Ivy bulbs after that), it’s competitively priced with its boring competitors.