Apple names its iPhone Apps of the Year, shares bestsellers across all categories & more 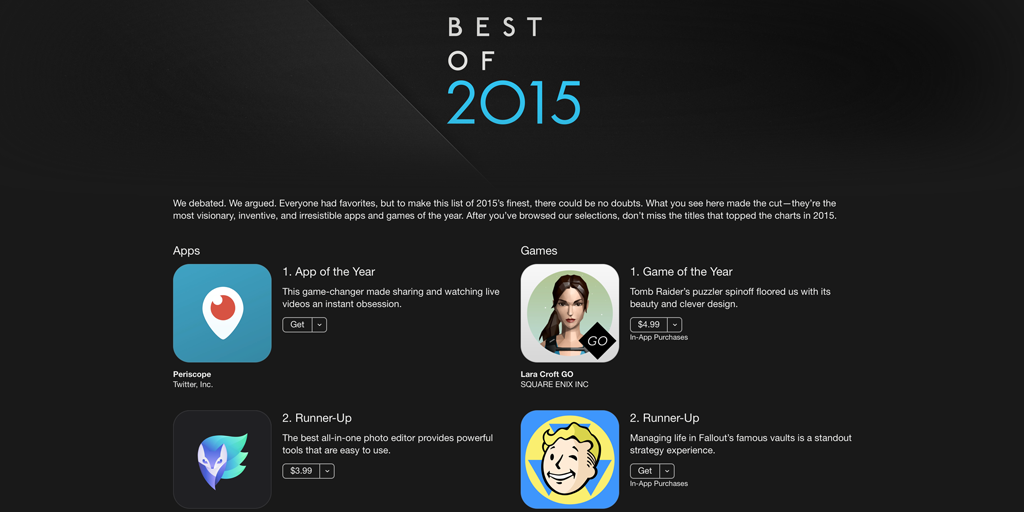 Apple has named live video sharing app Periscope its App of the Year 2015, and Tomb Raider’s puzzle spin-off Lara Croft GO as its Game of the Year. iPhone automation app Workflow won Most Innovative app, while Instagram took home the prize for Best App on the iPhone 6s.

In all, Apple picked 25 iPhone apps each for both general and games categories. It also shared the top 10 best-selling paid apps, most-downloaded free apps and top-grossing apps …

The best-selling paid iPhone apps of 2015 were Heads Up!, Fantasy Premier League 2015/16 and Minecraft: Pocket Edition. For free apps, WhatsApp, Dubsmash and Messenger headed the list, while the top-grossing apps were Clash of Clans, Candy Crush Saga and – despite Apple Music – Spotify.

Eddy Cue told the Telegraph that the developer community never failed to impress him.

“You kind of have to pinch yourself, the developer community is a huge part of what we’re doing and they continuously impress the heck out of me and our customers with the apps they’re able to create,” he said. “Just when you think there can’t be anything new, they come and innovate and come up with things we didn’t think were possible.”

Apple also shared its best-selling downloads in other categories:

Apple’s top 10 picks for Apps of the Year are: