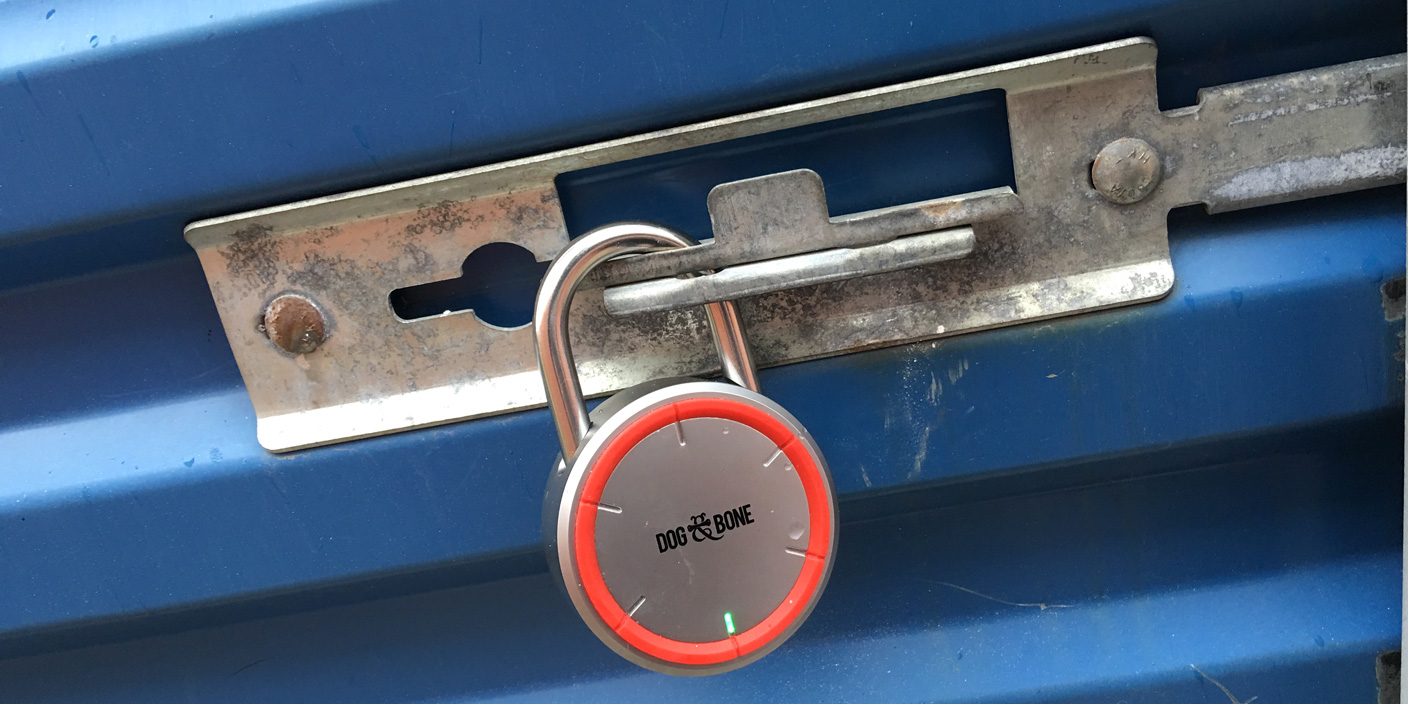 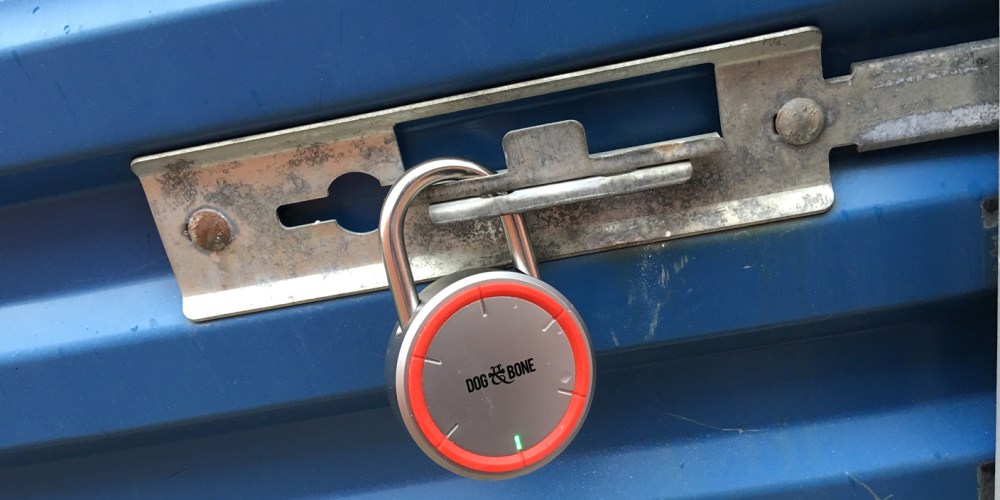 Thanks to Nest and other “smart home” accessory developers, wirelessly controlled appliances and security accessories are rapidly becoming mainstream. Garage and home doors have gone wireless, adding Bluetooth locks and remote controls, so it’s no surprise that the same features are beginning to appear in portable locks, as well. Since the ability to unlock doors without carrying old-fashioned keys is undeniably convenient, the only question is whether wireless locks are worthy of the premium prices they carry.

Best known for Apple device cases, Australian developer Dog & Bone has released Locksmart ($90), billed as a “keyless Bluetooth padlock.” Made from a zinc alloy with a 1.5″ stainless steel shackle, Locksmart is imposingly substantial, holding a Bluetooth 4 LE chip and two-year rechargeable battery inside a weatherproof frame. While it sells for a higher price than a basic weatherproof padlock with a key, or the sort of basic Bluetooth padlock one might use on a school locker, Locksmart is bolstered by a legitimately worthwhile app that enables it to work like $110 fingerprint-scanning padlocks — and arguably much better, since Dog & Bone’s app has several cool features that aren’t found in other padlocks…

From a hardware perspective, Locksmart initially appears to be extremely simple — so simple that you won’t even find an instruction manual in the box. Dog & Bone ships the lock closed, with nothing more than a micro-USB to USB cable and a sheet of paper directing you to download an iOS or Android Locksmart app. There’s no physical key in the box, and no obvious way to open the lock. If you want to start using the lock, you’ll need the app, which effectively turns your iOS or Android device into Locksmart’s first digital key. 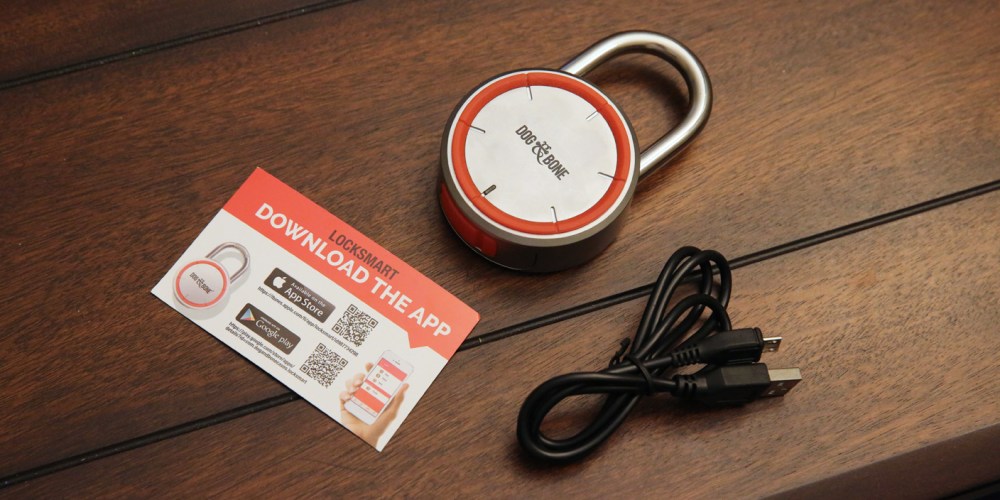 Locksmart’s size and shape make it look highly secure, and it has some distinctive design touches. Four inches tall, 2.5″ wide, and just over 1″ thick, it has red rings on its front and back to serve as bumpers, with a set of six front notches that appear to be hinting at hidden controls. But there aren’t any controls, at least, not on the front; the bottom front notch turns out to be a narrow status light that flashes red when Locksmart is recharging, stays solid green when fully charged, and flashes green when it’s ready to pair with a wireless device. Local, proximate pairing is required: you cannot open the lock if you’re outside of its Bluetooth wireless range, which is at least 30 feet, perhaps double that with recent iPhones. 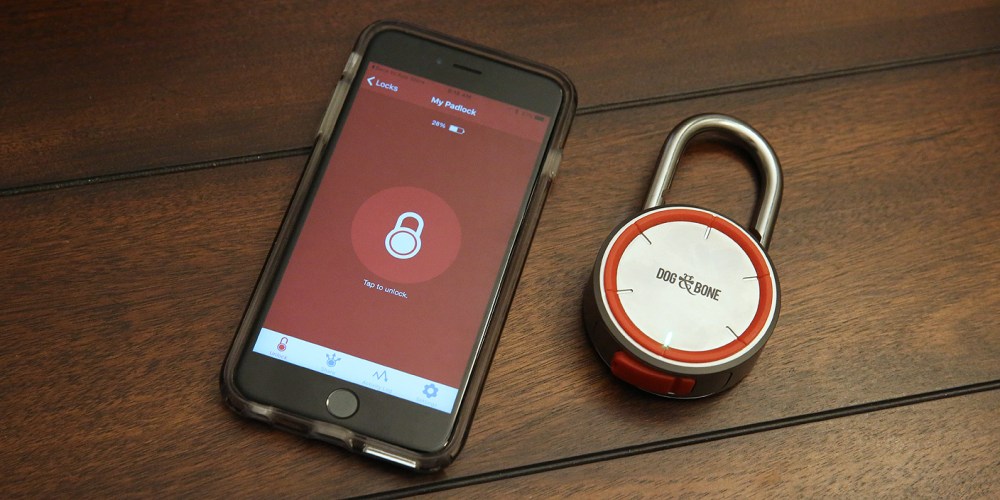 Dog & Bone says you can expect up to 3,000 “opens” of the lock on a single charge, with the need to recharge only once every two years, though I suspect that real-world battery life will vary based on whether Locksmart is used in extreme weather conditions. My review unit arrived with 28% remaining battery life — enough for at least six months of use — and said that it was fully recharged within less than an hour, though I found Locksmart’s software-based remaining power indicator to be somewhat flaky. To conserve the battery, Locksmart remains off unless you press a tiny power button that’s hidden under a rubber-sealed compartment with the micro-USB recharging port. You needn’t open the compartment to press the button, a particularly welcome accommodation if Locksmart’s being used in bad weather. 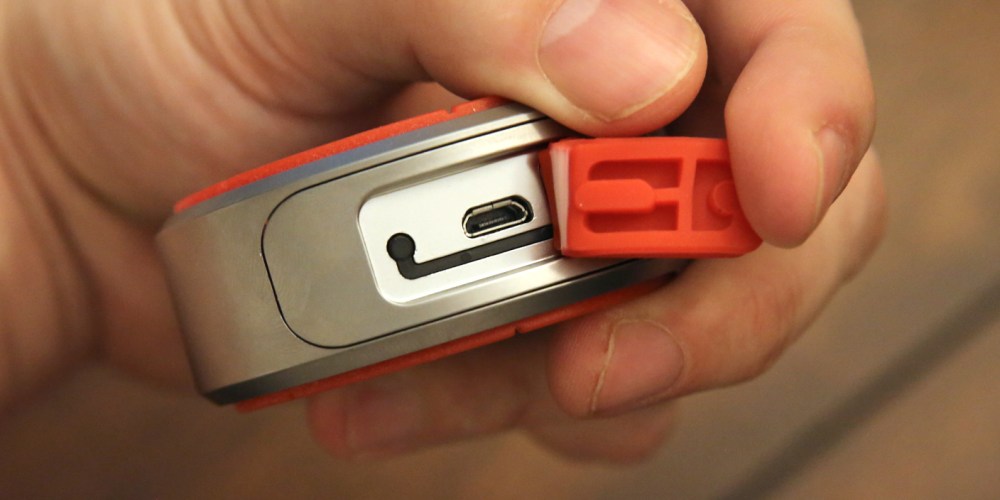 Most of Locksmart’s magic is found in Dog & Bone’s app, which is impressively designed and surprisingly functional. After you register for an account — layer one of security — you then pair the specific padlock to your iPhone for access, giving you the first opportunity to actually open it and attach it to something. In light of user complaints I’ve read regarding more basic Bluetooth padlocks, I’ll note that Locksmart’s Bluetooth pairing and locking were 100% flawless during my testing, with no reliability issues whatsoever when locking or unlocking. Using the iPhone 6s Plus, I was able to unlock Locksmart from two rooms away in a house, and a similar distance outdoors, without any complaint from the app. 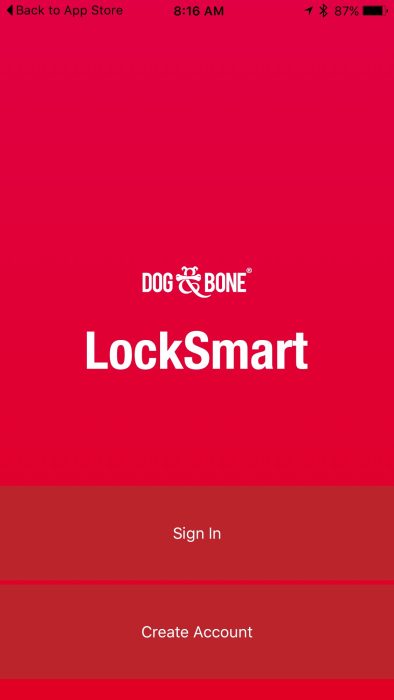 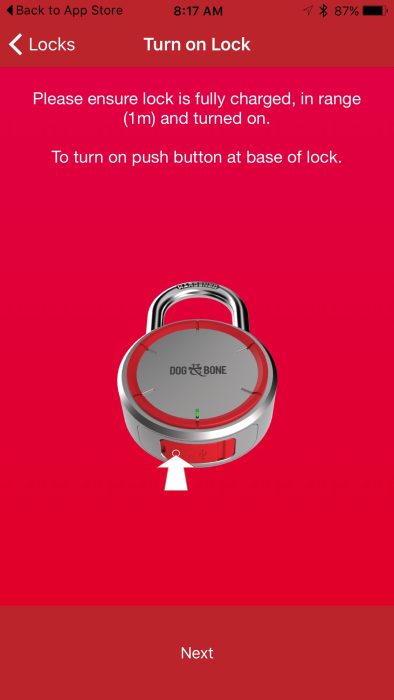 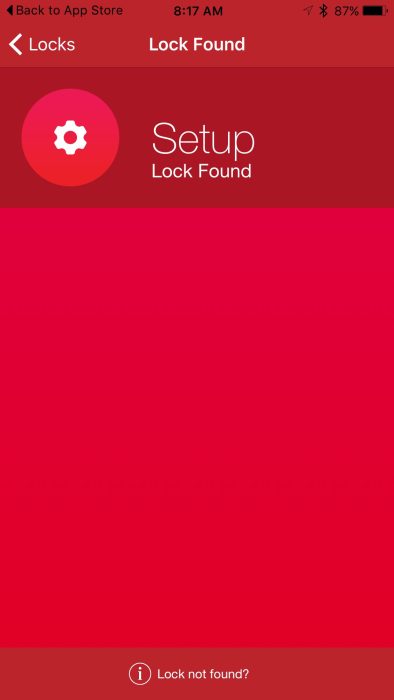 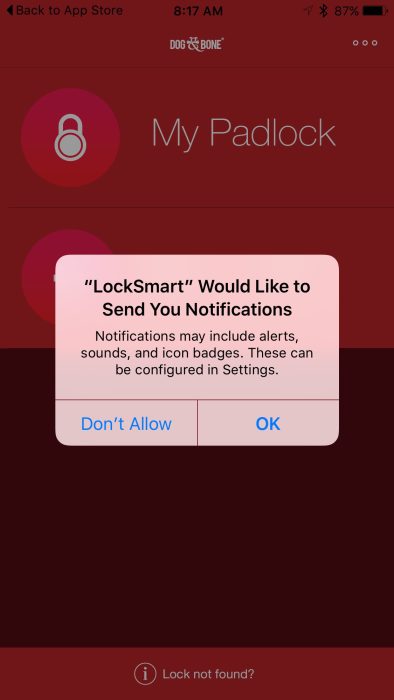 One killer feature of the app is the option to choose the type of security you want for Locksmart. You can choose from three different unlocking mechanisms: “tap to unlock,” “Passcode,” or “Touch ID.” Tapping is a simple one-tap mechanism that pops the motorized lock open in a flash, and Passcode lets you use a four-digit code to secure the lock, akin to a simple combination lock. By comparison, Touch ID relies upon your iPhone’s or iPad’s fingerprint sensor to open the lock, making Locksmart similarly capable to $100+ biometric padlocks, albeit with the far more reliable and fast fingerprint scanning of Apple’s Touch ID sensors. Once Passcode or Touch ID is enabled, most of your interactions with the Locksmart app require re-authentication with your code or fingerprint for security, preventing an unauthorized user from downgrading the chosen level of security. 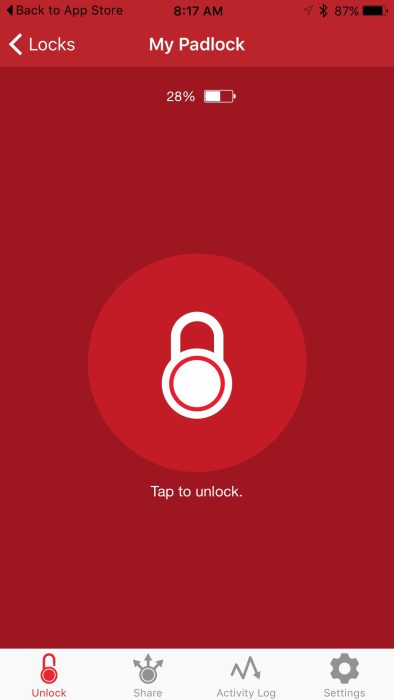 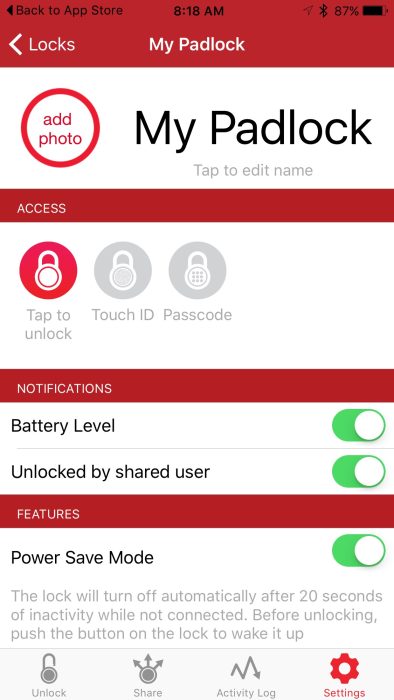 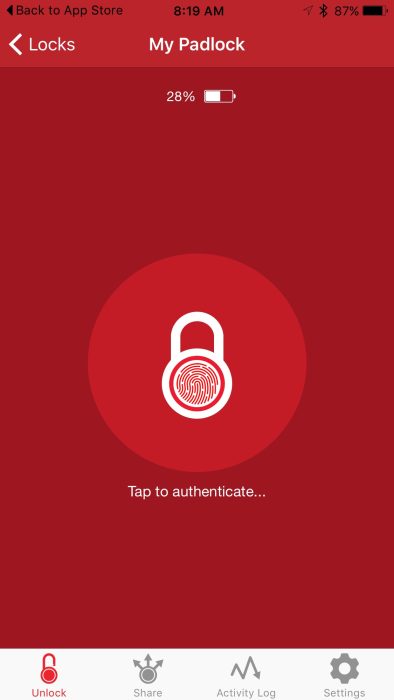 The app enables another frill: optional multi-user access. A Share feature lets you authorize up to 50 users to a single lock, deauthorizing each as you prefer. To add someone, all you need to do is press a plus button, enter the person’s name and mobile phone number, then authorize Locksmart to SMS an app download link with a Shared account authorization code. After downloading the app and setting up the account, your recipient gets immediate lock access — a process that took only 2 minutes in my testing. Each time a shared user accesses the lock, the main user receives a timestamped notification of the shared user’s access, a really nice feature. My only complaint about Shared access is a modest one: you cannot require a shared user to follow a heightened level of security, such as Touch ID or passcode access; Shared users can just “tap to unlock.” There are practical reasons why this makes some sense for fingerprints, but having second-level passcode protection wouldn’t be a bad thing. 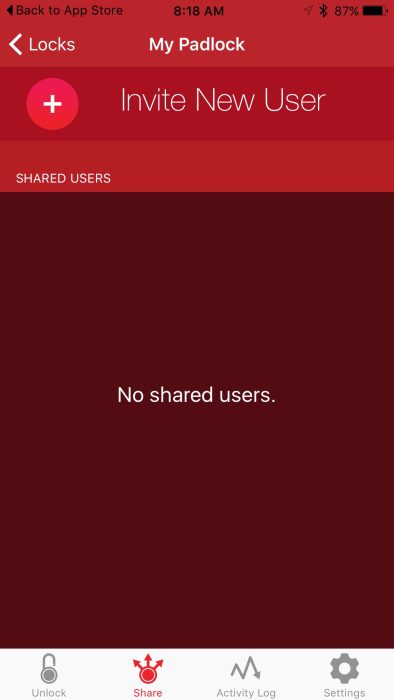 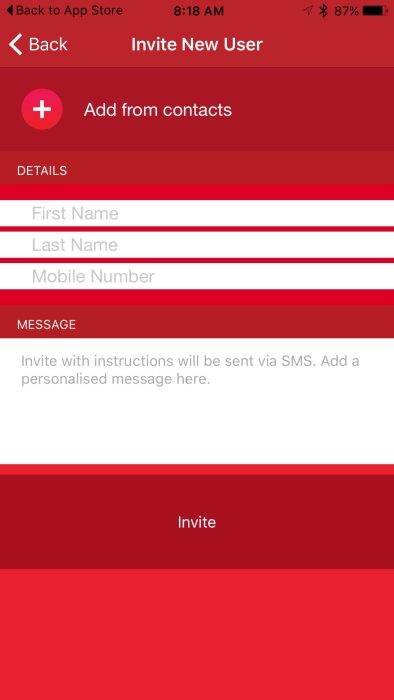 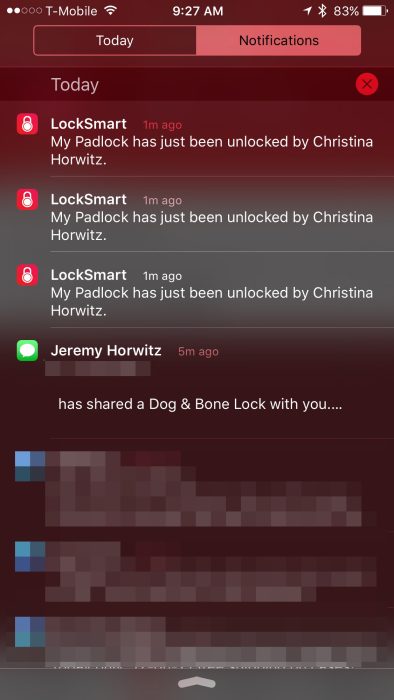 Apart from that limitation, Locksmart’s physical security is respectable by padlock standards — a step up over basic Bluetooth padlocks, but not Fort Knox level. The shackle is 8mm (0.31″)-thick stainless steel, which is mid-range in both thickness and material for cut resistance, enabling it to withstand common clipping tools but not heavy-duty bolt cutters. Similarly, the body is made from a die-cast Zamak-3 zinc alloy, a strong and heavy-feeling but not-quite-steel material, promising weatherproof operation in -20C to 70C temperatures, as well as rain, hail, or snow. These characteristics are comparable to what you’d find in a good $20 weatherproof lock, minus of course the app-assisted security and multi-user access features. 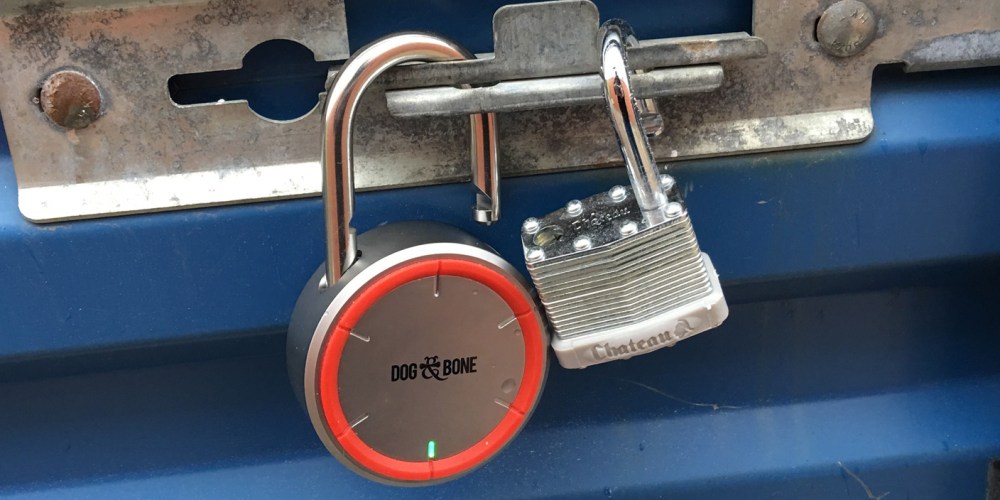 On the software side, Locksmart uses 128-bit Bluetooth encryption and a 256-bit cloud-generated private key, which means the padlock is far less likely to be successfully hacked than to be accessed by an authorized (but security-compromised) device. Since your iOS or Android device is the primary key once you’ve paired Locksmart, it’s imperative that you keep your device safe, as well as restricting shared access. If you lose your device, Dog & Bone suggests that you immediately log into the Locksmart app with from another device, which will automatically lock out your lost device. Then you should change your account’s password and delete the lock, setting it up again with your new device. 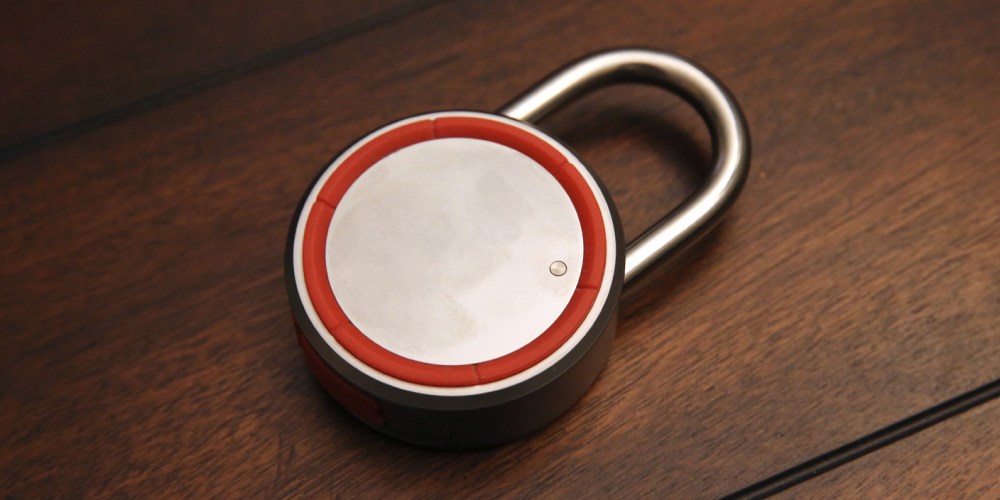 From my perspective, it’s easy to see padlocks as commodities — ‘seen one, seen them all’ — but when you really consider the nuances that make some locks better than others, Locksmart’s appeal becomes more obvious. While Dog & Bone has selected middle-of-the-road physical materials for Locksmart, the app enables sophisticated functionality, particularly Touch ID and Shared access, which collectively enable this padlock to be narrowly keyed to a single person or broadly opened by a collection of trusted users. Viewed as a more expensive alternative to a conventional padlock, Locksmart might be hard to justify, but as a less expensive (and more capable) alternative to a biometric padlock, it’s actually compelling. I’m looking forward to seeing Dog & Bone expand the Locksmart line, as a smaller and thinner-shackled version called Locksmart Mini is expected to be available in the not-too-distant future.