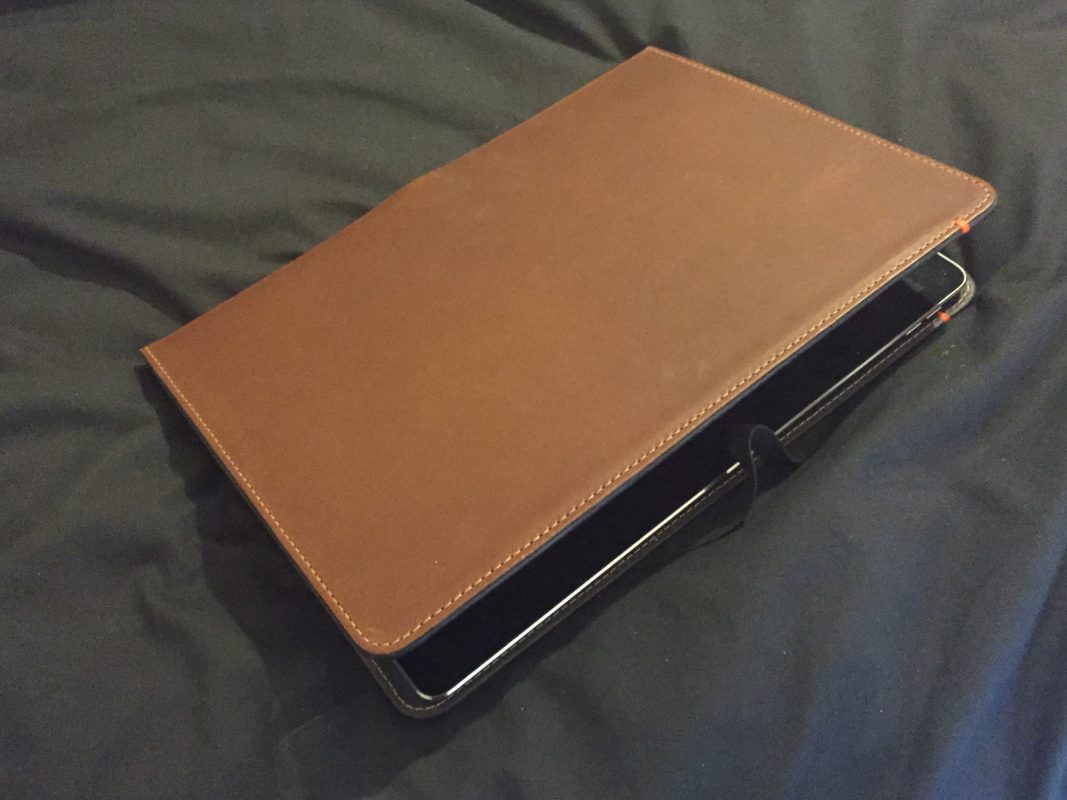 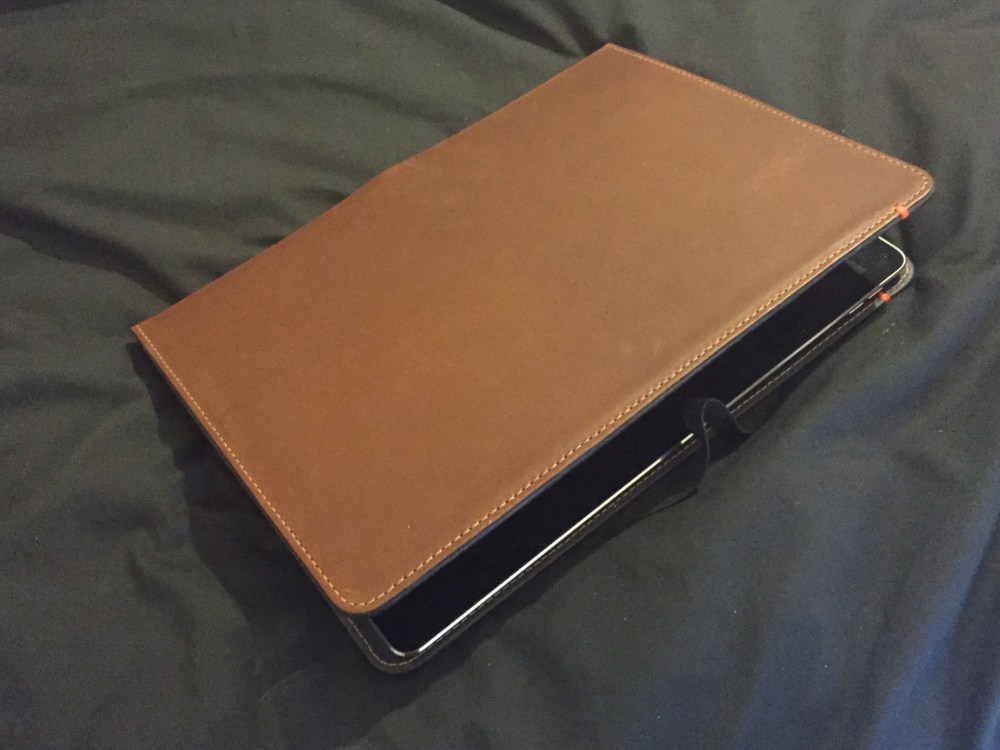 Today’s review is about the Oxford from Pad & Quill ($129). The Oxford is a premium Folio for the iPad Pro, described as a luxurious case and stand combo with an integrated pocket for the Apple Pencil. First impressions online are positive, but great iPad cases require a combination of style, features and practicality. I’ve been trying Oxford out for the last few weeks to decide how it stacks up for me. Does it deliver on these points? Read on for my full review …

First off, I love the design of Apple products, but the endless line of aluminium and glass can get monotonous and repetitive. Wrapping it in a leather P&Q case is a pleasing departure. The outer case is made from a single piece of leather, so there are no seams. It feels great to the touch — Pad & Quill calls it ‘American full grain’ leather. It’s a premium texture, like what libraries would encase books in years ago.

The inside is made from this black leather variant. It feels different to the outside as it’s very smooth, creating a nice contrast of texture. The interior is closer in materials to what I expect from clothing. You can actually see the grain and indentations. It’s very soft, as to prevent any scratching or wear on the iPad display which faces outward.

The orange/tan stitching is what connects the chestnut brown and back leather together. My minimalist taste would probably prefer a design that didn’t reveal the stitching, though, which is a P&Q signature design. There will be a difference in opinion here, of course, as I expect most people to love this classic design. For a hand-made product, the consistency of the stitching is sublime. I don’t really understand how the inside could get damaged unless you hacked it at with a knife, but Pad & Quill says it incorporates the same nylon that parachutes use for maximum durability. 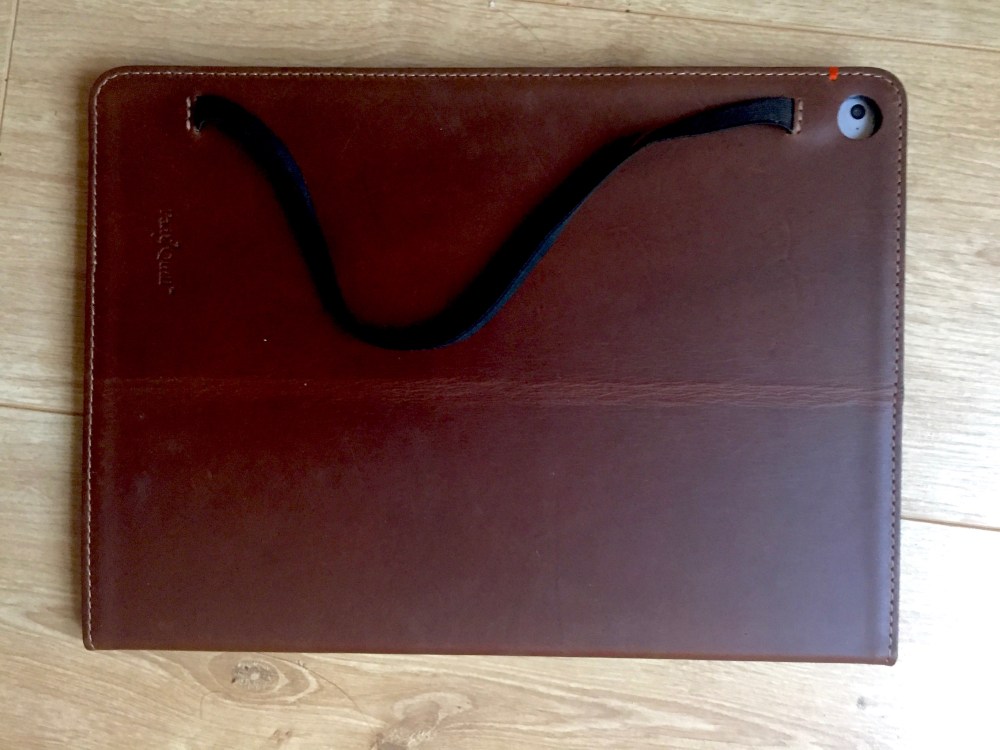 The iPad affixes to the inside of the case with two adhesive pads. You peel back the protective cover and slap the iPad on top to essentially glue it down. This is where the Oxford in particular may not be for me. I hate the idea of putting glue of any sort on the back of my iPad.

Pad & Quill use specially patented ‘clean release’ adhesive to prevent marks and stickiness from transferring, which actually works quite decently. The glue will last ‘years’ if left alone, the company says, and I do have enough confidence in the product after testing to believe the iPad will stay put. You can hold the case by one ear and the iPad does not come loose.

However, it is not made to be swapped in and out of the Oxford regularly. You will naturally lose the stickiness very quickly if you do that. Ignoring the longevity, it’s also just annoying to basically peel away the iPad each time. If you want to use this case, you will need to commit to never removing the tablet inside for the best experience.

So how does the iPad feel with Oxford around it? Pretty good actually. It’s not a slippy case, so I’d be comfortable holding this for prolonged periods, like going between classes or meetings. It also does a good job of keeping the iPad protected without being overbearing. It is admittedly heavy, though, and this adds noticeable heft to the total weight of the already large iPad Pro.

My biggest complaint with the Oxford case is the outer strap, specifically. It’s supposed to be a quick and easy way to bind the two book halves together when in transit, but it’s just not necessary to me. Pulling the elastic over the side of the case every time you are finished working can get old fast. It tends to get twisted easily too, so the clean line aesthetic is ruined by the mangled strap consistently. I definitely prefer cases that close with the front cover flap only (like with magnets) — ones that don’t need an additional step. It’s worth mentioning that the case does include a magnet in the front to take advantage of the iPad’s automatic unlock/lock features, which is nice. 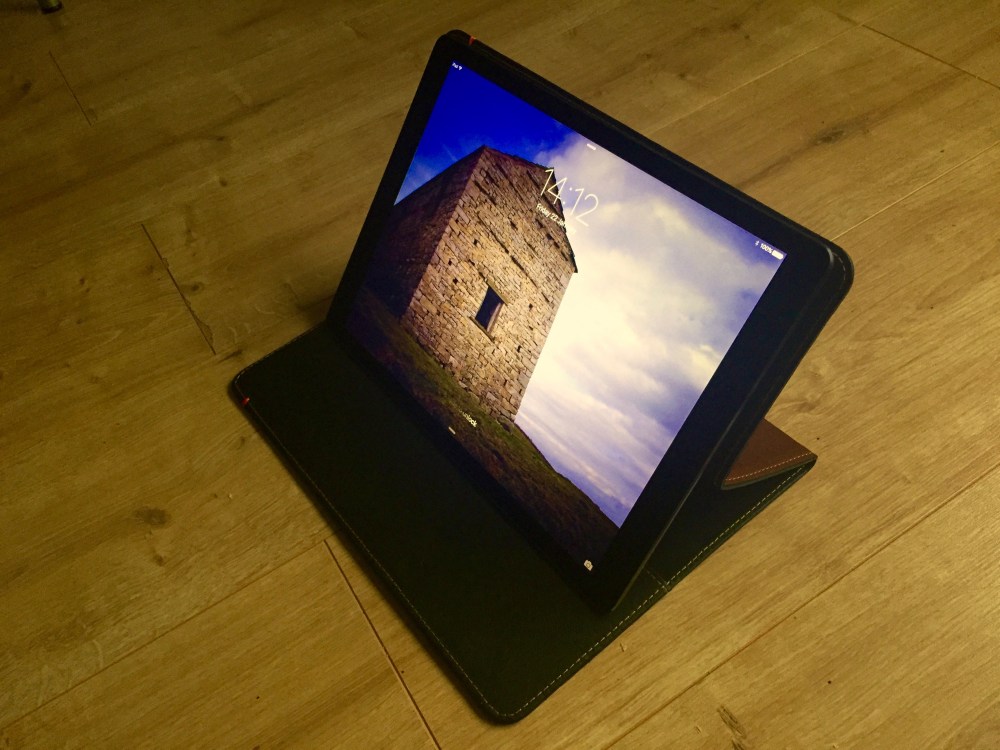 In terms of features, you get two modes of stand ‘integrated’ into the Oxford. It can hold the iPad either upright or thinly inclined for typing. The typing mode is achieved by the folding case backwards, using the thickness of the leather as the prop. The incline is small but suffices for a typing environment. As there is no hard edge connecting with the table, it doesn’t bring the same level of stability as Apple’s Smart Cover case does. When you are typing away on your lap, the case will not stop the iPad from bouncing around. You are basically relying on the resting surface not being too slippery.

To hold the iPad in theater ‘movie’ mode, you lift the iPad upwards and let it rest on the lower half of the case. It’s surprisingly sturdy in this mode, although it will cause a crease to appear in the backside leather. This is unavoidable if you want to stand the iPad in this manner. Not a deal breaker but good to be aware of it. In summary, I was impressed with the stand but a little disappointed with the typing orientation.

A big draw for people to this product will be the integrated Apple Pencil pocket. Indeed, it is true that the inside cover contains a flap to put the Apple Pencil inside. In practice, I wouldn’t recommend using it for that (this is a hard problem to solve). The contents of the flap sit directly on top of the iPad, only separated by a small piece of leather. Putting anything bulky in there, like the Pencil for instance, makes the entire case uneven (see images above). It works well for thin objects, like a few business cards or a small stack of paper. Admittedly, I think the general concept of the Oxford was conceived before the Pencil existed, and P&Q are cleverly using the feature to market it as Pencil friendly when it really isn’t totally suited or designed for the job.

So that’s the Oxford from Pad & Quill. Heavy, protective and very attractive. It’s a little pricey as an accessory (and still cheaper than Apple’s front and back solution) but if your driving interest in iPad cases is beauty, you can’t go wrong here. In the past, I have only used cheap, plastic cases for my iPads. Testing this one from P&Q has changed my perspective a lot. The bridle leathers and the precise stitching leaves a lasting impression. I’ve never owned an iPad case before that includes an artisan mark … and now I kind of dig it. For a business setting, this case would match any formal attire. I’m still looking for a case or other solution with a good way to hold the Apple Pencil, so I’m personally hesitant to switch completely to the Oxford. However, I can’t deny that the Pad & Quill Oxford is stunning to look at and touch. You can buy it for $129. There is also a smaller size version for iPad Air, if you own one of Apple’s 9.7 inch tablets.