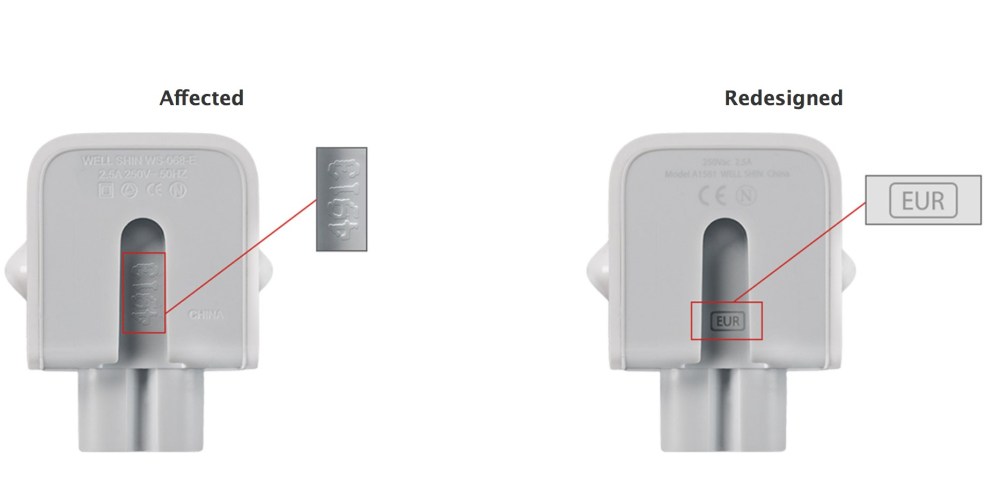 Apple today has announced a voluntary recall and exchange program for a select number of AC wall plug adapters used in Argentina, Australia, Brazil, Continental Europe, New Zealand and South Korea. America is not included in the recall. Apple says that in “very rare cases” the two-pronged Apple wall adapters could break and create a risk of electrical shock if touched.

Apple said that the affected wall adapters shipped between 2003 and 2015 with Mac and certain iOS devices. Apple also says the adapters were included in the Apple World Travel Kit. The company says that it is aware 12 issues worldwide.

The recall does not affect any of Apple’s USB power adapters or customers in Canada, China, Hong Kong, Japan, United Kingdom, and the United States.

Customers who would like take participate in the voluntary recall and exchange program should visit Apple’s new support page for the recall. The company is asking that users stop using the affected wall adapters and exchange them for new, redesigned choices.

Last year, Apple issued a recall for the Beats Pill XL citing instances in which the speaker could overheat and create a fire risk. Also last year the company launched a camera replacement program for the rear camera on select iPhone 6 and iPhone 6 Plus devices.

Because customer safety is the company’s top priority, Apple is asking customers to stop using affected plug adapters. Customers should visit www.apple.com/support/ac-wallplug-adapter for details about how to exchange the affected adapters for new, redesigned ones.

An affected two-prong plug adapter has either four or five characters or no characters on the inside slot where it attaches to the main Apple power adapter. Visit the program website for more details on how to identify an affected adapter.