Following reports that Apple Pay would be launching in France before the end of this year, it now looks like the service could be coming to a handful of other countries, as well. According to a MasterCard roadmap received by 9to5Mac from an anonymous unproven source, Apple Pay could potentially launch with support from at least MasterCard in Japan, Singapore, Brazil, and Hong Kong by the end of this year. The document also shows that Apple Pay in Canada could gain the support of MasterCard by the end of the year, as well. Currently Apple Pay in Canada is only supported on American Express cards.

Last October, Apple teased that Apple Pay would launch at some point in Spain, Singapore, and Hong Kong, but details were unclear at the time. This document, while we’re unable to verify it, suggests that Apple Pay will launch in those countries, and more, by the end of this year with support from at least MasterCard.

Furthermore, the document suggests that Apple Pay will become available in Japan and Brazil at some point this year, as well. Should this reign true, Apple Pay’s availability would essentially double from 5 countries to 10 countries this year, not to mention the rurmoed France launch, which would increase the total to 11 countries.

Finally, the roadmap indicates that Apple is potentially planning to expand Apple Pay in Canada to support MasterCard. Currently, only American Express is supported in Canada. 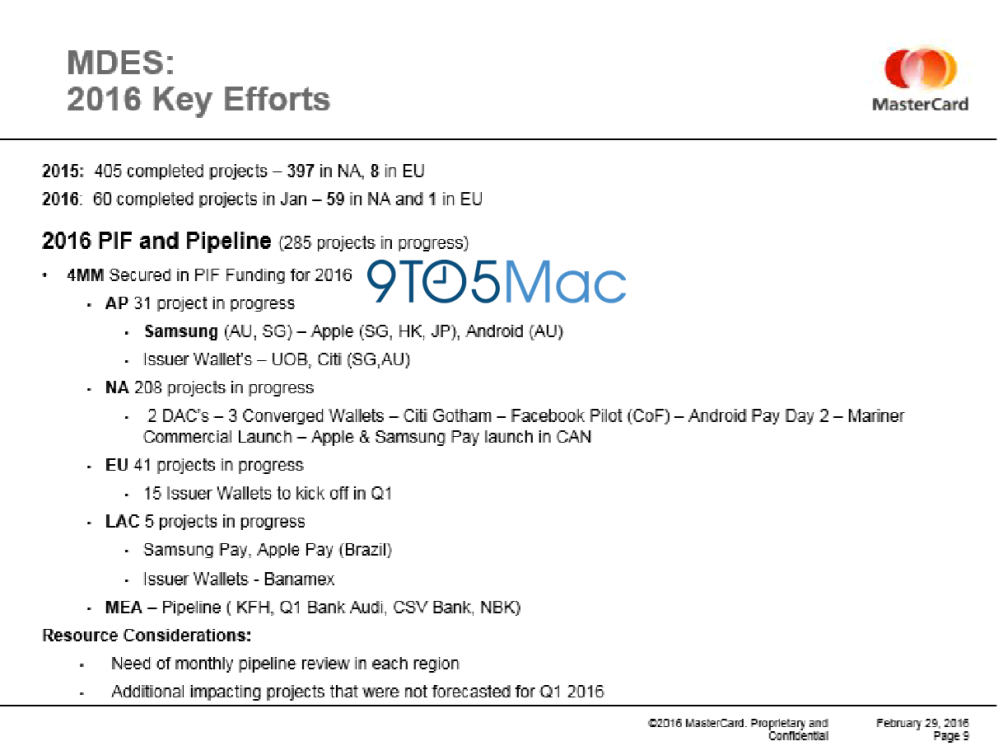 The MasterCard roadmap also shows Samsung Pay as being on the company’s agenda, which has already been announced by Samsung, perhaps lending some credibility to the document’s validity.

Earlier this year, Apple Pay launched in China with UnionPay credit and debit cards, while Apple has continued to expand the service in the United States, brining it to handfuls of new banks and credit unions at a time.

We reached out to MasterCard and will update if we hear back.