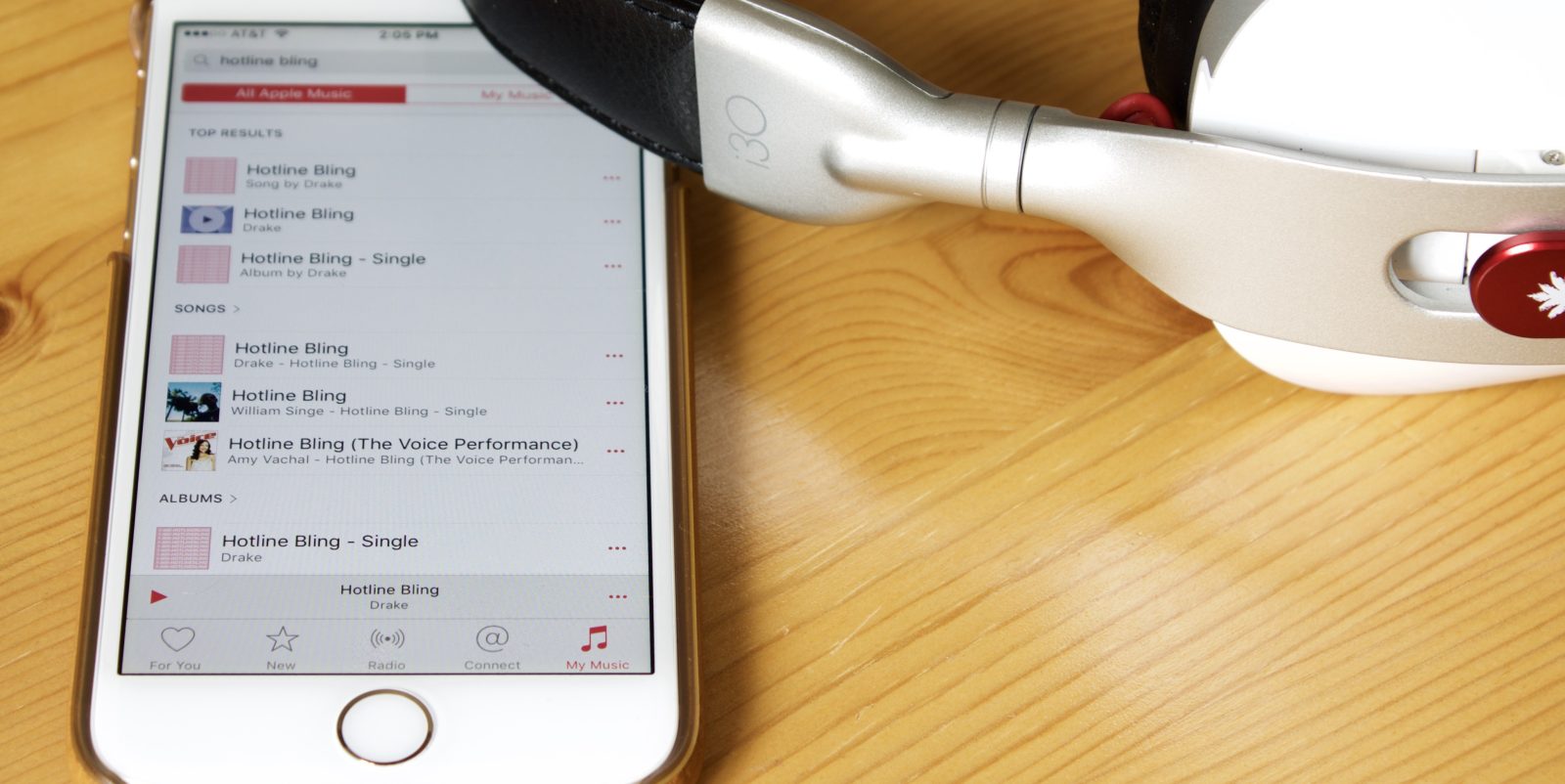 Before Apple Music even launched on iOS I knew there would be a difficulty in finding a way to balance the iTunes Store, Apple Music, and a user’s current music library. What I never expected was how long it would take for Apple to begin addressing the issues that were introduced. The most exasperating part of Apple Music on iOS has to be searching for video content. Nearly every time I search for a specific video (music video or otherwise), I end up getting frustrated and just head to iTunes on my computer instead.

When Drake’s now infamous “Hotline Bling” music video was released, it was available exclusively through Apple Music before hitting other online video channels. I remember seeing the Apple Music tweet announcing the video, and getting excited to check out what kind of work the team put into it. Imagine my annoyance when I couldn’t find the video through searches within Apple Music on iOS. I had to keep referring back to the original tweet just to find and share the video. 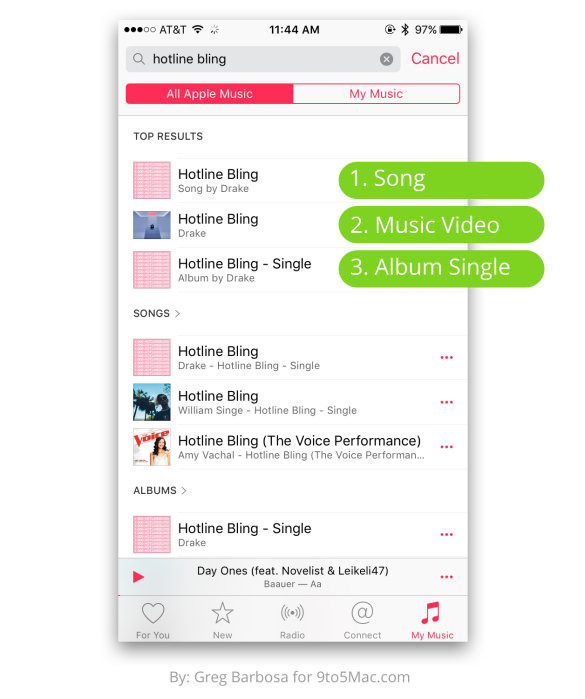 I personally know that the second option listed is the music video I’m searching for, but that’s only because I’ve seen the video so many times and the thumbnail makes it evidently clear. How would a new user discern this, and why would they select one over the other two? Of course, the user could just scroll down and go through the listed Apple Music search sections: Top Results, Songs, Albums, Playlists, Connect, Artists, Music Videos, and Stations. Scrolling through this list is not perfect, and it presents the current major problem with Apple Music search and videos.

A new user searching for video content wouldn’t want to and may not know to scroll all the way down to the Music Videos sections to find the video they want. When a song has reached a certain level of success, wouldn’t it make sense to clearly indicate the song, music video, and album in the top results? What about artist’s that release music videos through their Connect page? Those aren’t even shown in the Apple Music search results at all.

About four months ago, Skrillex released a music video for his remix of GTA’s “Red Lips” on his Apple Music Connect page. Unless you actively monitored the page or someone told you, you would never find it on Apple Music. A few days later after Skrillex’s release, the video was posted officially under GTA’s artist page. Once posted there, it was shown under the music video section and became discoverable through Apple Music searches.

Let’s break this problem down a bit further. Apple is reportedly working on multiple original shows exclusive to the Apple Music platform. Originally it was reported that Dr. Dre was working on a sex-filled and violent drama for Apple Music’s first original series, and just yesterday news came out about a new original TV show based on the app economy. With the current state of Apple Music search on iOS, how does Apple expect to surface this content? Will a new section dedicated to TV/video or original series exist? Could Apple break out video entirely into its own section of the app or its own app?

Last year we discussed thatJust this week Apple partnered with Vice to release an original documentary series following various music scenes around the globe. The series falls in-line nicely with Vice’s documentary stylings, and Apple Music’s push to surface interesting and unknown musical content. Except for the fact that this series was crazy difficult to find, if not impossible, without a direct link. If Apple does have plans to release a cable-replacement service priced as low as $40 per month, then Apple Music’s current video content might be better suited in a separate app all together. This could help create a better content discovery experience across iOS and tvOS.

When I published the article discussing Vice’s new series, I couldn’t find it through Apple Music on my iPhone. I found Vice’s official page, except going there just brought me to a list of playlists and their Connect page. The series, The Score, was nowhere to be found. I had to: jump onto my computer, head to Vice’s site, find the series’ trailer page, select a link to the official series on iTunes, and only then I was able to start watching what I wanted.

Today, the situation is worse, if that’s even possible. I began searching the series on iOS again hoping that it would have surfaced by now. I typed “The Score” into Apple Music on iOS, and lo and behold the series is not shown on the first page of the results at all. That’s fine, I expected there to be hundreds of other items matching the title. I decided to search for “Vice” instead. I found the official Vice page, and scanned through for the official series, and it wasn’t even shown at all. Annoyed, I decided to head back a page and go section by section on the initial results page. 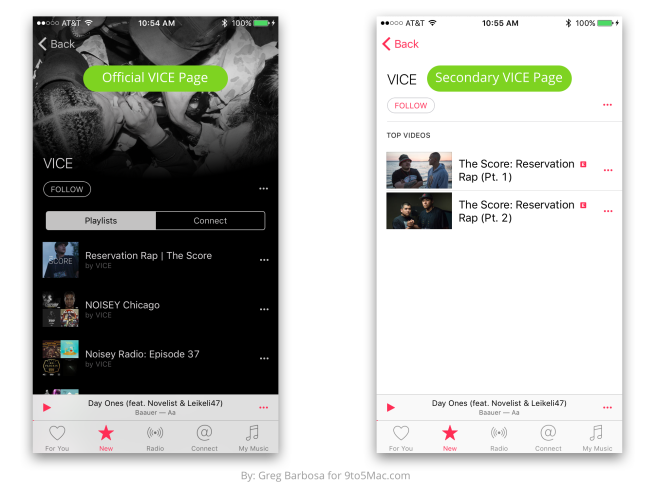 I finally found the series under the Music Videos search results section. While The Score is a video series about music, it was definitely not a music video. Directly below the series’ title, I noticed it showed the artist as “VICE”. I thought this was strange considering I already went to Vice’s official Apple Music page and didn’t find the video there at all. I clicked through to this potentially different Vice page, and discovered another official Apple Music page. This page only included the series’ content, and nothing else. How would a user ever be expected to find this content easily?

It’s stranger to me that this is a series that was reportedly worked alongside Apple Music. With that mentality, why isn’t the content being promoted more or pushed higher up top in search results?

WHAT’S IN A NAME?

Possibly the greatest challenge to Apple Music’s service is its name. The name feels too inclusive to what they’re trying to accomplish with all the different content. Services like Spotify, Tidal, and Pandora have names that are less limiting to immediate expectations. Apple Music may be focused on music for now, but if any of the reports are true, more and more original video content will begin hitting the platform that may not directly relate.

Apple Music has a serious video discovery issue that is counter-intuitive to the content being published. I don’t expect Apple to change and update it all overnight, or even over a point release, but I do hope that iOS 10 brings major improvements to the search functionality as a whole. We’ve yet to see Eddy Cue’s iTunes refresh, and I continue to hold out with bated breath. Not only because I’m a daily user, but because I like the Apple Music platform and know it should be improved if it’s going to continue to into the future as Apple’s new content service.