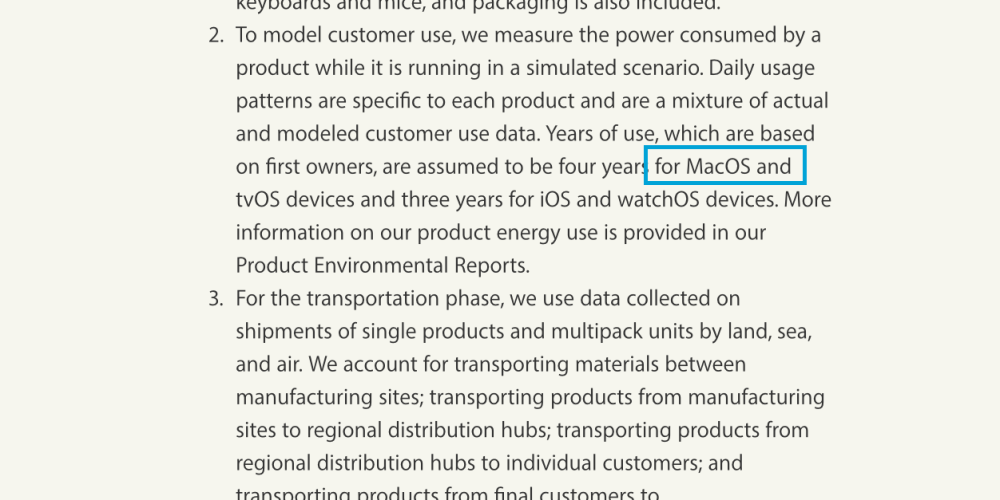 Earlier today, Apple unveiled the beginnings of its efforts for Earth Day 2016, and with it came an updated webpage that aims to answer all sorts of questions about Apple and its focus on the environment. One tidbit of information on that page, however, is that instead of referring to its desktop operating system as OS X, Apple again has referred to it as MacOS.

In a section on the webpage that discusses Apple’s process for conducting a product life cycle assessment, it refers to MacOS, tvOS, iOS, and watchOS devices. There’s no mention of OS X anywhere on the site.

Last month, an OS X 10.11.4 framework was found with the macOS naming scheme, which fueled speculation that the next major update to Apple’s desktop operating system would include a naming rebrand.

Today’s finding is also far more conclusive than the framework resource that was found last month. This is because developers often use macOS identifiers in filenames and code for convenience, while today’s MacOS mention clearly came from somewhere within Apple where perhaps they’ve simply gotten used to the new name.

It makes sense for Apple to rebrand its OS X operating system to MacOS. It puts the naming more in line with watchOS, tvOS, and iOS. Although, it’s somewhat interesting that Apple has referred to it here as MacOS and not ‘macOS.’ The difference, however, could be that Mac is a proper noun while ‘tv’ and ‘watch’ technically aren’t without the Apple stuck in front of them.

Nevertheless, it is looking more and more conclusive that Apple will soon rebrand OS X as MacOS. The company is still planning at least one more release under the OS X moniker, as it has recently released the first developer beta of OS X 10.11.5. The rebranding, however, could occur as soon as WWDC where the company will likely unveil the next major update for the Mac. We reported earlier this year that Apple is planning to bring Siri to the Mac with the next major update.