[UPDATE: Apple has issued a statement on the passing of Bill Campbell, saying he “believed in Apple when few people did.” Via Daisuke Wakabayashi:

Bill Campbell was a coach and mentor to many of us at Apple, and a member of our family for decades as an executive, advisor, and ultimately a member of our board. He believed in Apple when few people did and his contributions to our company, through good times and bad, cannot be overstated. We will miss his wisdom, his friendship, his humor, and his love for life.]

So saddened by the passing of Bill Campbell. I will miss you Coach.

Bill Campbell believed in Apple when few people did. We'll miss his wisdom,friendship,humor & his love for life. RIP pic.twitter.com/HA7hYgGxNM

Re/code today reports that Silicon Valley icon and longtime Apple board member Bill “The Coach” Campbell has passed away at age 75 after a long battle with cancer. The unfortunate news comes from “many prominent tech players,” following earlier unconfirmed reports. Campbell was a mentor to many tech leaders, including Steve Jobs, Larry Page, and Jeff Bezos.

Campbell first joined Apple under John Sculley and was the company’s Vice President of Marketing. After things didn’t work out between Sculley and Campbell, however, he went on to found the Go Corporation, which was later sold to AT&T. After that, Campbell went on to become the CEO Of Intuit and join Apple’s board of directors when Steve Jobs returned to the company in 1997.

Campbell’s “The Coach” nickname originated after he was a football coach at Columbia University, where he also served on the board of directors. Campbell stepped down from Apple’s board of directors in 2014, offering up the following quote in an interview with Fortune:

Campbell has walked a sometimes not-so-fine line during his business coaching career managing potential conflicts of interest. The highest-profile danger zone was his dual role on the Apple board and advising Schmidt and Google. “Steve would say, ‘If you’re helping them you’re hurting me.’ He would yell at me,” recalls Campbell, whose normal banter typically needs to be sanitized for most publications. “I’d say, ‘I can’t do HTML, come on. I’m just coaching them on how to run their company better.’” He continued in both roles for years.

In the same interview, Campbell praised Apple’s growth under Tim Cook. Furthermore, Campbell predicted back in 2013 that wearables would become a trend in the technology industry, teasing that he would expect “a lot of things going on with the application of technology to really intimate things.”

Campbell played an instrumental role in the technology industry, especially for someone who couldn’t “do HTML.” He’ll be dearly missed by everyone and truly left his mark on Apple, Google, and the world as a whole.

Update: Apple is honoring Bill Campbell’s life and contributions to Apple with a full-screen splash on the Apple.com homepage today. 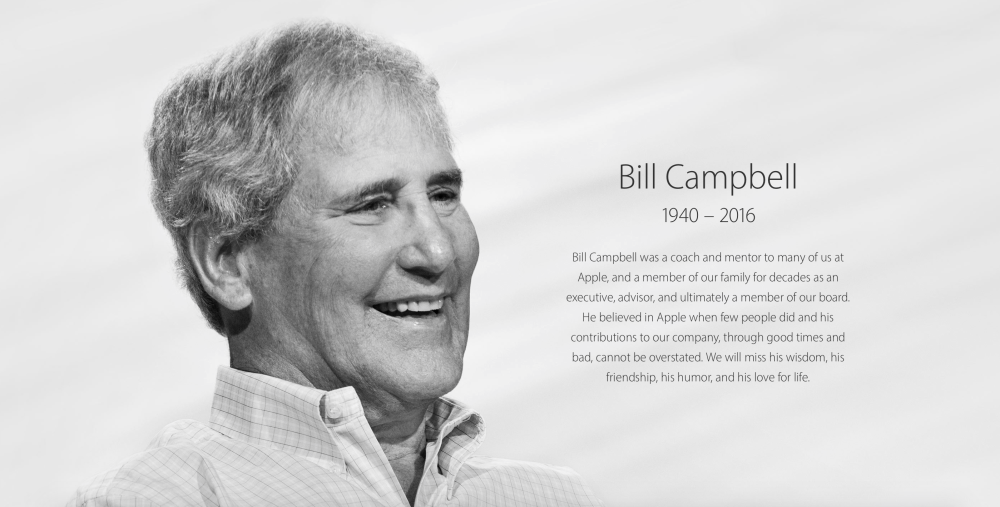