For the iOS 9.3 chart, the reported change is a jump of 5% over the last reported statistic, a substantial increase. This rise can probably be explained by compelling feature enhancements included in the iOS 9.3 update, such as Night Shift, Touch ID Notes and more.

Moreover, Apple launched a couple of new hardware devices that help to boost adoption numbers, in the form of the iPhone SE and 9.7 inch iPad Pro. As both products are only sold with iOS 9.3 installed, new hardware releases boost overall adoption for the latest operating system version compared to older devices still running iOS 8 or earlier.

Apple is expected to unveil the next major release of iOS, unclear if it will be dubbed iOS 10 or iOS X, for WWDC which was announced earlier in the week. 9to5Mac’s statistics show a gradual ramp in hits from iOS 10 devices over the last two months, indicating that the company is expanding testing ahead of the conference.

In terms of features, rumors about iOS 10 features are still pretty thin on the ground. There is a potential for person-to-person Apple Pay payments to debut, the ability to hide stock apps, and App Store discoverability improvements amongst other changes. Read our roundup about what to expect from Apple’s software at WWDC here. 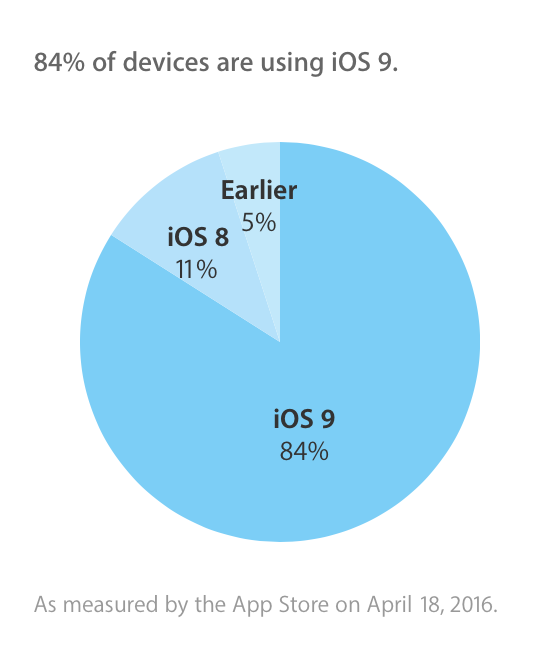