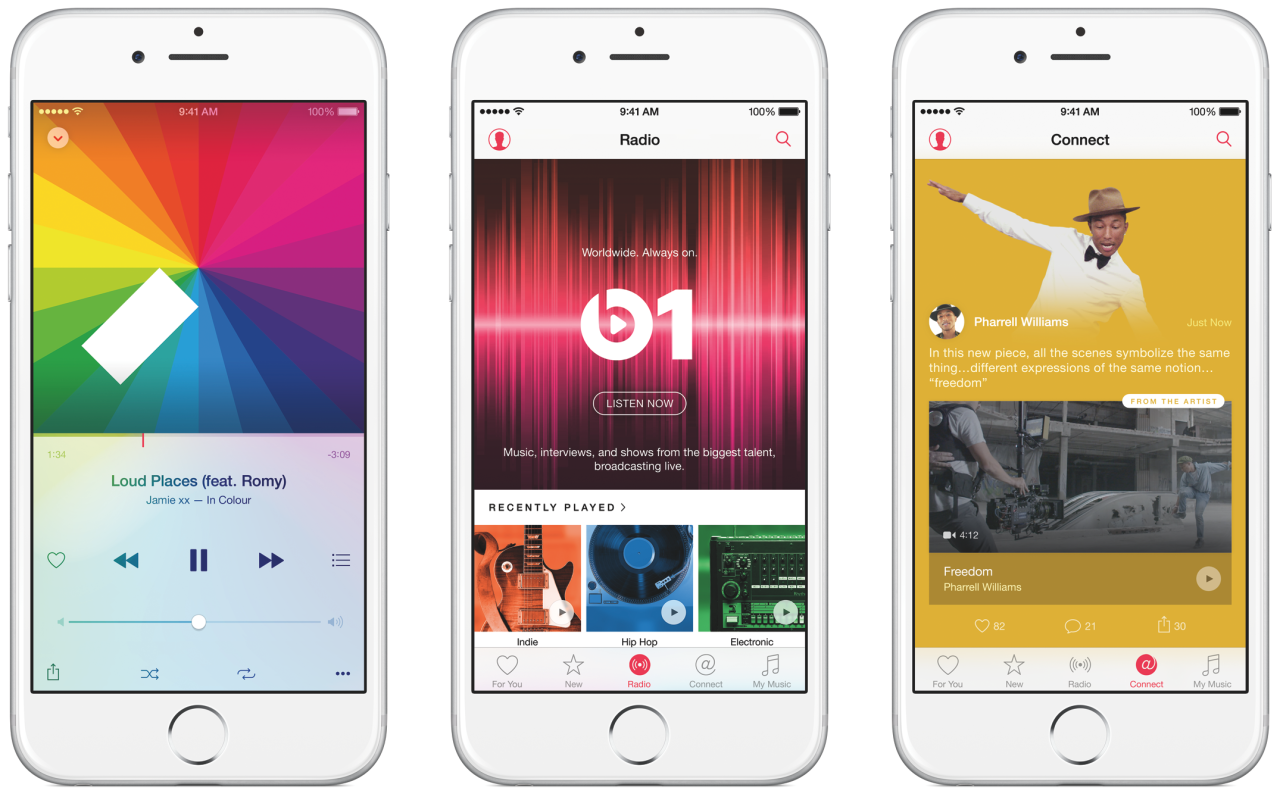 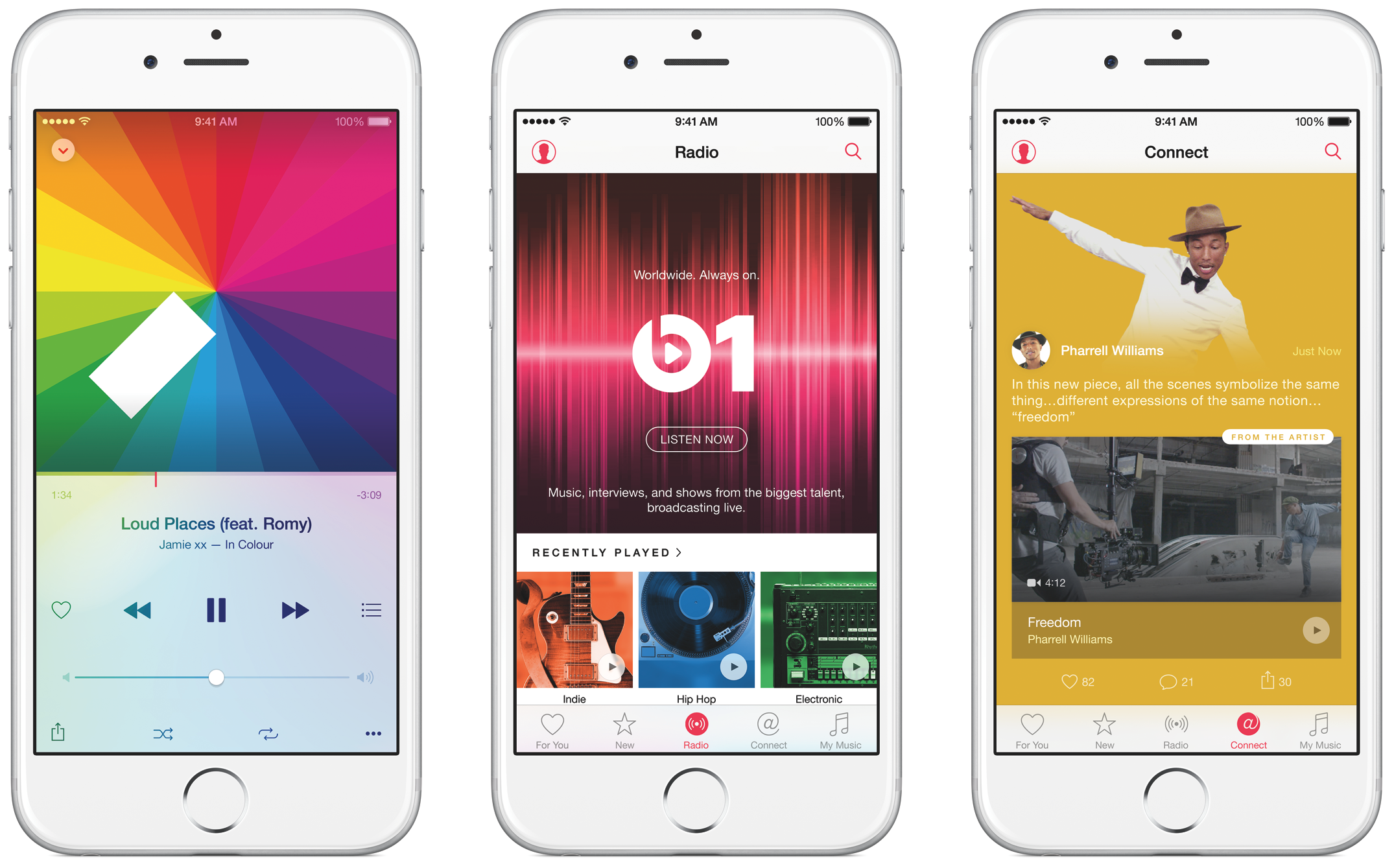 Nearly a year after Apple Music’s debut, Apple is preparing to announce its streaming music service’s first end-to-end overhaul, according to multiple sources familiar with the changes. The changes are expected to be shown off at Apple’s Worldwide Developers Conference in mid-June, and Apple currently plans to launch the updated service across its product lines that currently support Apple Music this fall as part of new operating system versions. The updated version of Apple Music has been in the Apple product development pipeline since the end of last year, and work in earnest on the updated service began at the end of February, according to sources.

The new version of Apple Music, which Apple recently announced has 13 million users so far, focuses on a redesigned user-interface, a few new functions, and reorganization as well as simplification of existing features. The new user-interface ditches the current colorful and translucent look in favor of a simpler design that emphasizes black and white backgrounds and text. For instance, the user interface in the albums view will no longer change in appearance based on the color of a particular album’s art. While the new interface will eschew color in the user-interface, album artwork will become “huge” and a larger part of the interface in order to avoid a dull black and white look, according to people who have seen the updated Apple Music service.

The new interface will also make use of additional 3D Touch shortcut previews and better promote the ability to share songs. However, the social Connect feature will remain mostly unchanged in this year’s revamp. A source said that the greater emphasis on album artwork makes the new service look “bolder, yet simpler.” The updated service will also make better use of Apple’s in-house San Francisco font, including larger, black, bold text for menus and tabs. Apple also plans to expand the use of its own font this year by updating all of its applications, operating systems, marketing materials, websites, and online services to almost-exclusively use San Francisco, according to several sources. Apple made San Francisco its system font last year in iOS 9 and El Capitan.

While the most of the Apple Music service will be redesigned, much of the emphasis is on the “For You” feature, the tab that recommends songs, albums, artists, and music videos. This section will be simplified and better promoted to increase usage of the feature. While the interface will change, the functionality will use algorithms similar to today’s Apple Music recommendations engine, according to sources. The new service will also discontinue the “New” tab, which is a jumbled list of top charts, genres, featured music launches, and curated playlists. It will be replaced with a section called “Browse” which better organizes the aforementioned content. The Beats 1 Radio service is unlikely to see notable interface changes this year.

Bloomberg News earlier reported that Apple Music will get an interface revamp at WWDC. Along with the new interface, the updated Apple Music service will include “a few” new features. This will include wide-ranging support for song lyrics. Apple Music users interested in reading song lyrics must currently manually search for lyrics online and have the option of syncing these lyrics to Apple Music by editing song files on the Mac. As part of this year’s changes, Apple is working with song labels to automatically integrate lyrics into Apple Music. This rollout will be gradual, but a “good amount” of songs will include lyrics support from the start of the new service’s launch.

The new version of Apple Music will be fully released as part of iOS 10 this fall and will first launch in beta this summer via the developer and public betas of iOS 10, which is codenamed “Whitetail” after the popular Pennsylvania ski resort. The Apple Music updates will also expand to the Mac via a minor iTunes update (a larger revamp of iTunes on the Mac is expected by next year) and via a new Apple TV app for models running tvOS. Apple planned to release iTunes 12.4 for Mac “weeks ago” with minor interface changes, but the rollout is likely delayed until summer.

Apple will also announce OS X 10.12 as well as a new version of watchOS at WWDC. The new iOS and OS X versions are expected to include an updated version of Apple Pay that works for online stores in the browser and upgraded Photos apps. As we reported earlier, the new version of OS X will include Siri for the first time, which is expected to integrate with Apple Music like it does on iOS and tvOS.