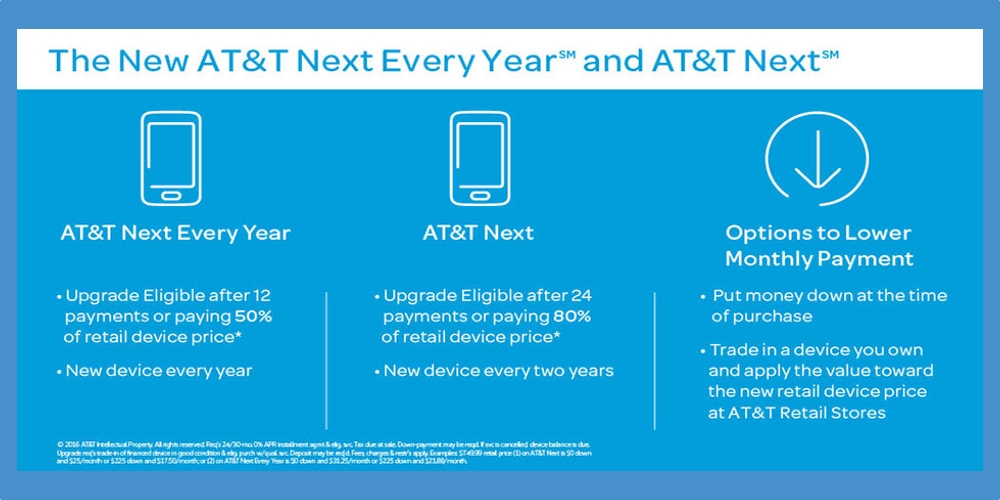 Changes are coming to AT&T’s Next program starting in June. AT&T Next, the company’s monthly payment program for buying smartphones and tablets, is shifting from four options to two options and adding ways to lower the monthly payment.

AT&T first launched Next as an alternative to two-year contracts back in 2013 with a single plan to pay for new hardware over 20 months with an option to upgrade after 12 months, then later added other options including Next 18 and Next 24 with lower monthly payments and longer upgrade cycles.

Currently, if you buy a new device on AT&T Next, these are the available options:

But starting June 9th, AT&T is reducing its Next options from four to two and promoting the down payment option for both remaining plans. These are the plans that are coming next month:

Next Every Year works like AT&T Next 12, which was a confusing name as it allowed upgrades after one year but required almost two years of payments to be paid off. And the new plan simply called Next is like AT&T Next 24 which allows upgrades every two years with trade-ins or early pay-offs but 30 full payments to complete in total.

Next Every Year is for customers wanting to upgrade every year (say, the latest iPhone every fall) while Next offers lower monthly payments and upgrade options every other year.

With either plan, AT&T is also promoting ways customers can reduce monthly payments:

Last year, AT&T totally moved on from traditional two-year contracts for smartphones and tablets and instead replaced contracts with monthly payment plans through Next. Apple similarly offers its own annual upgrade program for certain iPhones purchased from retail stores and most recently on its website.