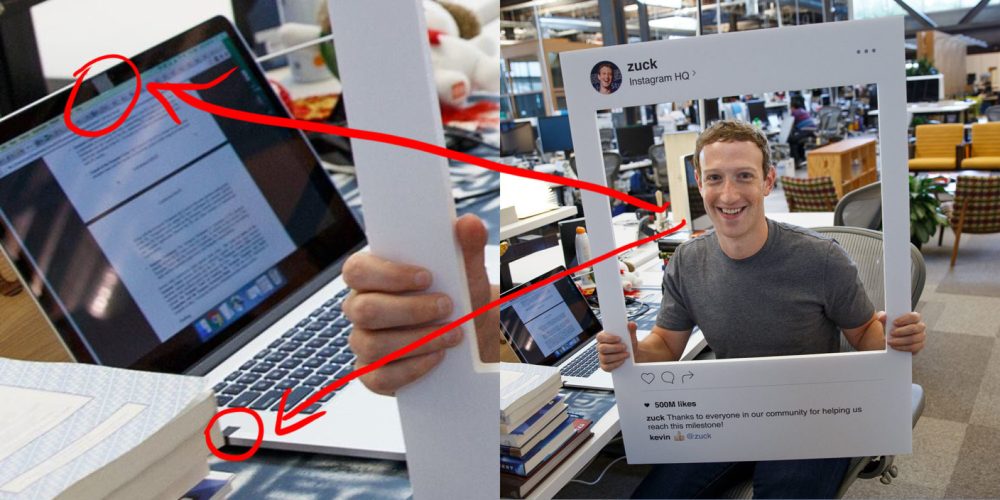 Facebook CEO Mark Zuckerberg is no stranger to elaborate security. It was reported earlier this year that Facebook has spent more than $16 million on security to protect the executive from “specific threats” from users and other sources. Meanwhile, Zuckerberg has also apparently hired 16 bodyguards to protect him at home. Now, Zuckerberg has inadvertently revealed another security measure he takes – and it’s surprisingly simple.

Earlier today, Zuck shared an image on Facebook celebrating Instagram’s 500 million monthly user milestone, but Chris Olson on Twitter quickly noticed something about the MacBook Pro in the background of the image: the webcam and microphone are both covered with tape. While some tried to argue that it wasn’t Zuckerberg’s desk, it’s been seen in a variety of other images of Zuckerberg and in various live streams, so it seems like a safe assumption.

It’s a pretty simple security measure taken by one of the more powerful figures in the technology and social industry and it definitely didn’t cost Facebook anything. Facebook detailed Zuckerberg’s elaborate security earlier this year, noting that in 2015, $5 million was spent on his security. The 16 bodyguards that rotate shifts at his house outraged his neighbors, however, with an open letter being sent to the neighborhood asking for residents to complain to the city of San Francisco.

On the flip side, Apple spent just $209,000 on Tim Cook’s security in 2015, while $1.6 million was spent on Amazon’s Jeff Bezos. But for some reason I don’t think Tim Cook puts tape over his Mac’s webcam and microphone, although it’s a solution that has appeared many times in the past and prompted some to develop specific solutions.

Do you put tape on your Mac’s webcam and microphone? Let us know in the comments.