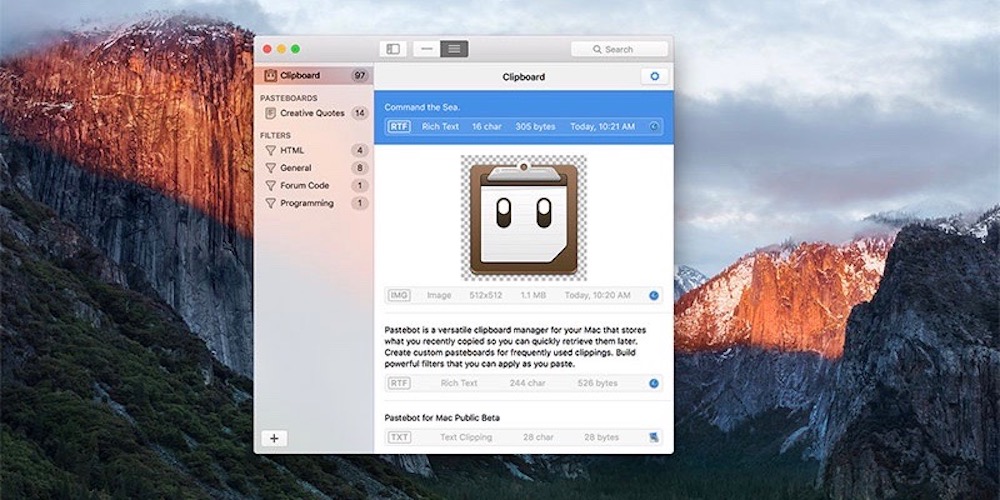 Tapbots, the makers of the popular Tweetbot Twitter client, have a new app for Mac available today called Pastebot. The Mac utility is a fully featured clipboard manager that lets you easily access recently copied items and save frequently pasted items.

As Tapbots says, the Pastebot for Mac app is the successor to the discontinued Pastebot iOS app that let you copy and paste text between iOS and OS X:

We have been wanting to do a full blown Pastebot for Mac long before we first released it on the iPhone. Paul wrote a fantastic little utility app called PTH Pasteboard Pro on the Mac which I had always wanted to rewrite as a Tapbots app, but we were just too busy with iOS. After the release of Tweetbot 2 for Mac, it only made sense to have Todd start on Pastebot for his next big project. So we are very excited to release Pastebot for Mac…as a public beta.

With macOS Sierra, Apple delivers a universal clipboard feature between iOS 10 and macOS 10.12, but Pastebot lives separately on the Mac with a fully featured user interface and features like filtering specific items from being saved.

Tapbots even embraces the upcoming universal clipboard feature while noting that sync is missing from this preview version of Pastebot:

There will be various sync features once for sale on the App Store and Pastebot will work harmoniously with the new clipboard sharing features in macOS Sierra.

As for the future of Pastebot on iOS, Tapbots says it’s focused on the new Mac app for now but sounds open to a new iOS version if the Mac app does well:

If Pastebot is successful and highly requested on iOS, we will strongly consider it.

Pastebot is fully baked at this point, but Tapbots is testing a public beta like it did with Tweetbot for Mac before it launched. You can try the Pastebot for Mac public beta at tapbots.com/pastebot before the finished version launches as a paid app.