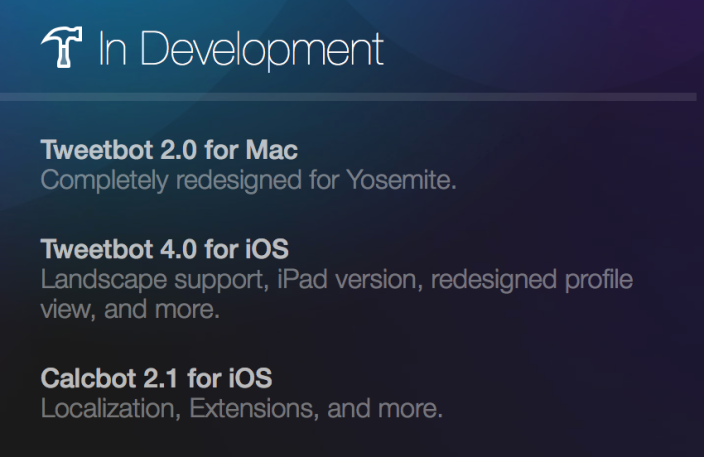 Tapbots has announced on its website that it is officially discontinuing some of its apps to focus on Tweetbot and Calcbot, for the time being. Convertbot’s features have been built into Calcbot, as we covered last week, so it’s not surprising that app is going away. Pastebot and Weightbot have also been discontinued. Although Pastebot is getting pulled, Weightbot is now free on the App Store for “sentimental value” as it is the app that started Tapbots as a company. The blog post says that the company may return to Pastebot in the future.

With those three products retired, the company is dedicating 2015 to focus on major improvements to Tweetbot and Calcbot. More specifically, Tapbots are looking to bring Calcbot to Notification Center as a Today view extension.

What most people are interested in, naturally, is the state of Tweetbot. The Yosemite redesign of Tweetbot 2 for Mac was teased earlier this month and the post says that is approaching beta, foreshadowing a near-term release. The update will be free, so you can download Tweetbot for Mac today and get the Yosemite update automatically when it is released.

The long-overdue iPad update for Tweetbot 3 is also in the cards, which will move away from iOS 6 design motifs to fit the modern Apple design styles. The company also said that they will be bringing a landscape mode to Tweetbot 3 for iPhone. These updates are currently planned to come out before WWDC, a June timeframe.