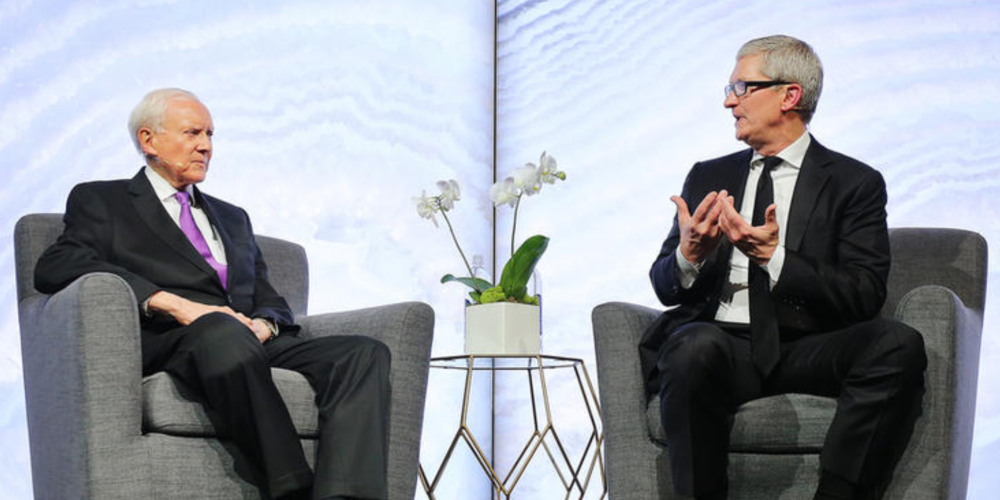 Cook opened his time on stage by speaking highly of Utah’s thriving development community, noting that there are more than 50,000 registered iOS developers living in the state. “There’s no place in the world I’d rather be,” he said.

Regarding Jobs, Cook took a second during his Q&A with Senator Orrin Hatch to note that Jobs’ culture of creating products that “enrich people’s lives” is something that will never leave Apple. “His spirit will always be the DNA of the company,” Cook said. “Lots of things will change, but that will never change.”

“It’s important because I want his legacy to be with Apple forever,” Cook said. “Not for Apple to be constrained by it  but we’re very much married to his vision of making the best products that enrich people’s lives. That doesn’t change.”

The majority of Cook’s time on stage, however, was spent discussing the growing need for strong encryption. As he has done in the past, Cook said that Apple very strongly believes that encryption is the key to protect users in terms of privacy and from cyber attacks. Referencing Apple’s intense battle with the government over unlocking the San Bernardino iPhone, Cook reiterated that what Apple was asked to create is something that “should never be created.”

“We throw all of ourselves into this and are very much standing on principle in this. We believe the only way to protect both your privacy and safety from a cyber attack is to encrypt. Encryption is inherently great. And we would not be a safe society without it.”

Cook noted that encryption is “one of the biggest issues” Apple is currently facing. “We feel that we have a responsibility to protect our customers,” he said. In a time when high-profile privacy breaches are becoming more common, such as with the current election cycle, Cook stated that current methods for encoding data are sophisticated enough to remain untracked in the near future.

“I think there’s two kind of different questions there. It will be enabled in the operating systems first, because it’s a precursor for that to happen for there to be mass adoption of it. I’d look for that to happen in the not-too-distant future. In terms of it becoming a mass adoption [phenomenon], so that, say, everyone in here would have an AR experience, the reality to do that, it has to be something that everyone in here views to be an ‘acceptable thing.'”

“And nobody in here, few people in here, think it’s acceptable to be tethered to a computer walking in here and sitting down, few people are going to view that it’s acceptable to be enclosed in something, because we’re all social people at heart. Even introverts are social people, we like people and we want to interact. It has to be that it’s likely that AR, of the two, is the one the largest number of people will engage with.

“I do think that a significant portion of the population of developed countries, and eventually all countries, will have AR experiences every day, almost like eating three meals a day, it will become that much a part of you, a lot of us live on our smartphones, the iPhone, I hope, is very important for everyone, so AR will become really big. VR I think is not going to be that big, compared to AR. I’m not saying it’s not important, it is important.

“I’m excited about VR from an education point of view, I think it can be really big for education, I think it can be very big for games. But I can’t imagine everyone in here getting in an enclosed VR experience while you’re sitting in here with me. But I could imagine everyone in here in an AR experience right now, if the technology was there, which it’s not today. How long will it take?

“AR is going to take a while, because there are some really hard technology challenges there. But it will happen, it will happen in a big way, and we will wonder when it does, how we ever lived without it. Like we wonder how we lived without our phone today.”

Video of Cook’s Q&A at Utah Tech Tour can be seen below: