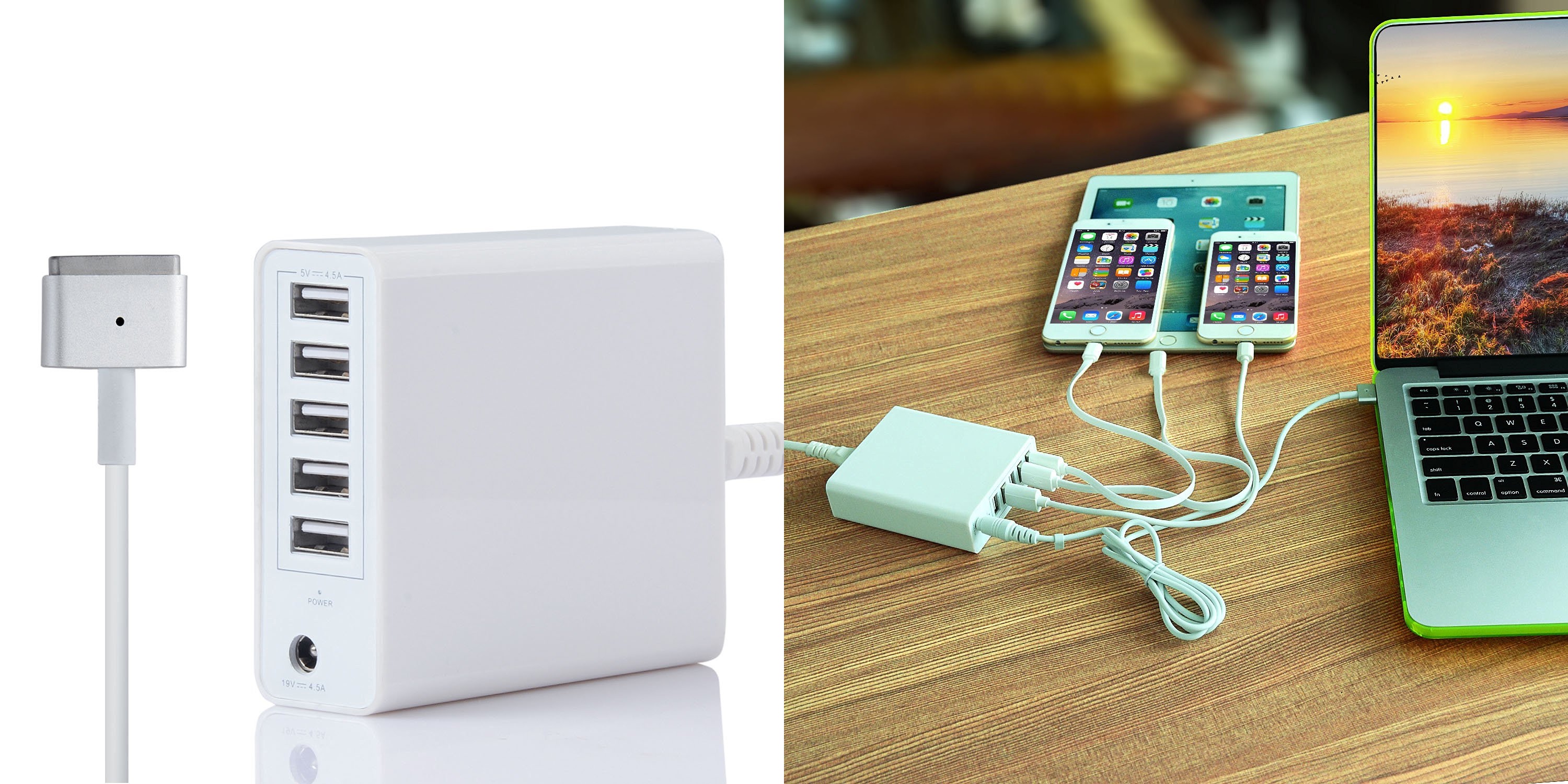 After a lot of abuse, my MacBook Pro’s 85W MagSafe 2 adapter finally died last week. Often Apple adapters fray at joints and this one did to an insane degree but somehow it kept working for 3 years through tons of travel, work and even some fun.

My MagSafe needs to last another month. What’s the over/under? https://t.co/dZeV3ZHz1Z pic.twitter.com/EnKkmdX0d6

So what to do? Typically I’d buy a new Apple Magsafe 2 adapter. But clearly Apple has some redesigned MacBook/Pro/Airs coming later this month and they will likely be charged via USB-C, at least in some cases. So that means I only need MagSafe to power this 2013 MacBook Pro for at least a few more weeks before it gets relegated to backup machine, kid’s computer or sold off when I get Apple’s new OLED/USB-C creation.

So I thought I’d get a little creative and save a few bucks at the same time. As I was looking for options on Amazon, I came across an interesting product: The “BND 85W MagSafe 2 Replacement Power Adapter Charger w/ 5 USB Ports for Apple MacBook Pro”. For less than half the price of a discounted $77 Apple MagSafe Adapter this $37 charger includes 5 USB ports and gets solid 4.3/5 star reviews. What the heck, I’ll give it a try…

A week in, all is well. It shipped quick in easy to open packaging and the product feels solid.  My 2013 15″ Retina MacBook Pro charges just as fast as it did with the Apple MagSafe 2 adapter and I’m able to keep a number of USB devices plugged at the same time or when my MacBook isn’t around.  Keep in mind that this thing only directs 4.5A of power to the USB section which means even though this thing has 5 ports, you will only be able to fast charge (>2A) about 2 USB devices at a time.

The MacBook charger which plugs in via a dedicated 4.5A x 19V = 85.5W port doesn’t slow down and is on a different circuit from the USB ports. It has worked well so far. 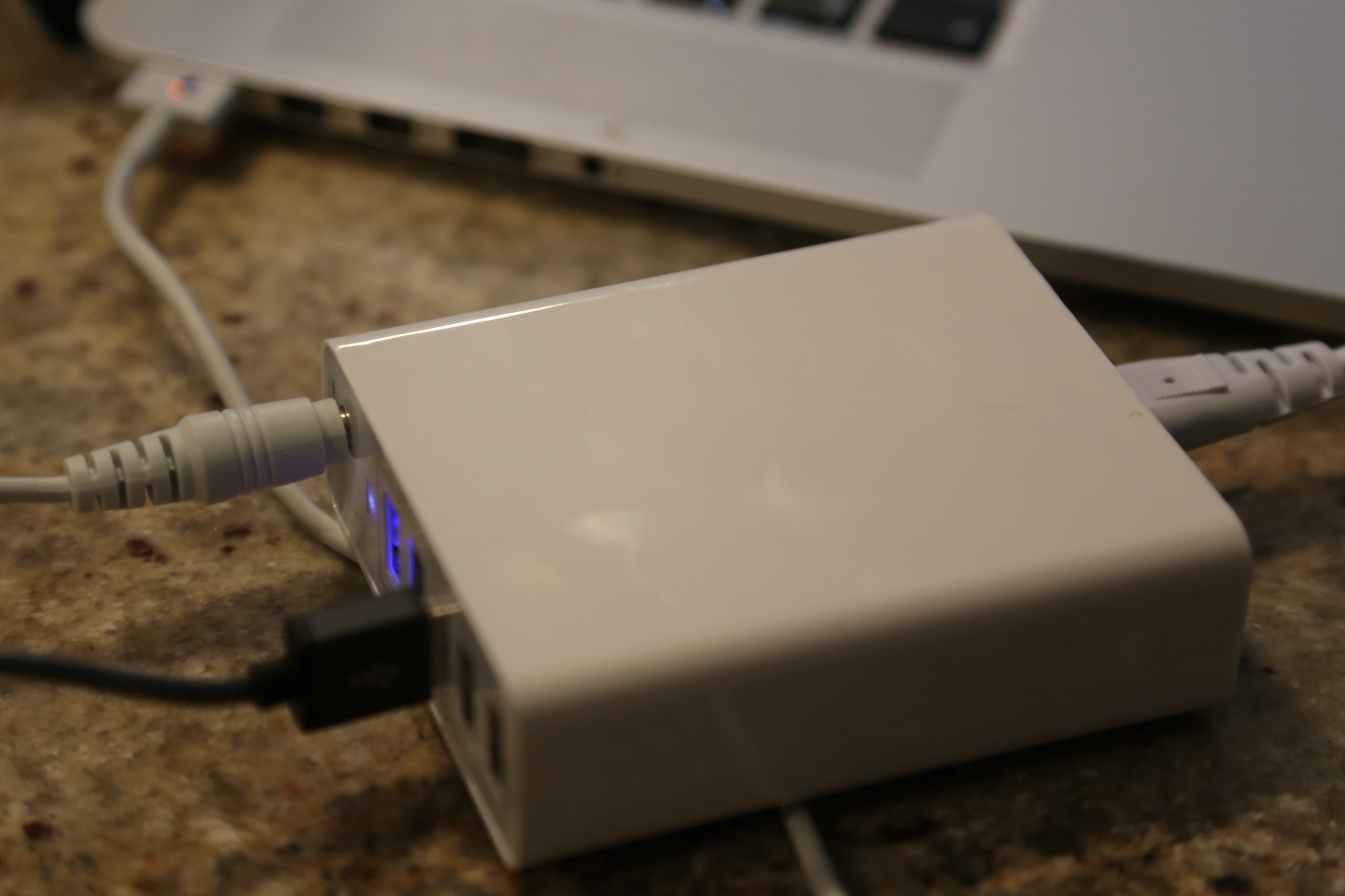 When you charge a bunch of things,  like the iPad Pro and MacBook Pro at the same time (image below), things get a little warm – but if I recall not any warmer than the power adapter it replaced.

For me, this is just to tide me over for a few months while I wait for Apple’s new MacBook Pros, but I could see using this as a secondary or travel MagSafe Adapter.

The catch is that obviously this isn’t an Apple approved MagSafe implementation and therefore I must add that this could burn your neighborhood down or something. Originally Apple protected its MagSafe products pretty vigorously even though it is a dumb charging port standard, unlike Lightning for example. Apple even went so far as to sue battery maker Hyper for making a MagSafe battery which forced them into a complicated workaround (interestingly, the MagSafe cable included here works with the excellent Hyperjuice batteries!).

Lately however, tons of Magsafe adapters have been showing up on Amazon and elsewhere. It isn’t clear why Apple has stopped threatening all of these unlicensed third party makers of MagSafe power adapters, but perhaps MagSafe is on the way out. 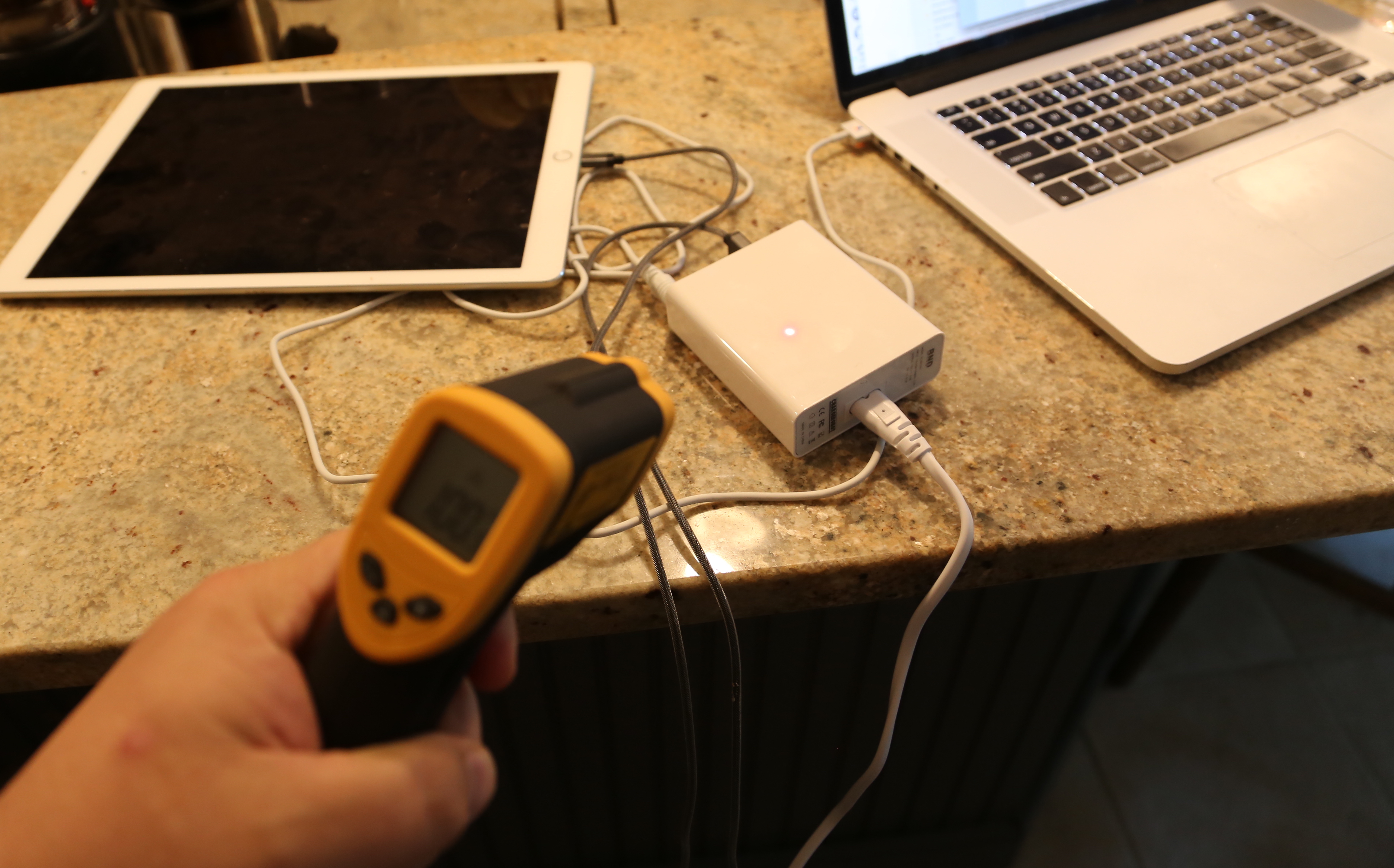 That would be a shame because the technology has saved a few of my Macs from being thrown onto the floor.

To summarize: Yes, this is an awesome solution for charging not just a MacBook Pro but a bunch of USB things like iPads and iPhones, but maybe you shouldn’t buy it because Apple might be getting rid of MagSafe and it isn’t “MagSafe Compliant” – nothing not made by Apple is.

If these are indeed the last days of MagSafe, I’m going out in style with this $37 BND 85W MagSafe 2 Replacement Power Adapter Charger w/ 5 USB Ports for Apple MacBook Pro.