It’s one of the features that even the most die-hard opponents of Macs tend to grudgingly admit is a good idea. And yet that (very) shiny new MacBook aimed at the largest slice of the MacBook Air market doesn’t have it. Is this a one-off move for a single model, or will we see USB C power replacing MagSafe across the entire MacBook range … ?

I argued before that there’s no risk of Apple heading down the single-port route in the MacBook Pro–at least, not for some years yet. We’re going to have multiple ports, the question is: which ones?

Getting at least one USB C port on the next-generation MacBook Pro is a no-brainer. It’s the latest, greatest standard. It’s incredibly flexible. And Apple has already backed the standard by putting it in the new MacBook. The next question, then, is how many?

The most radical approach would be for Apple to drop Thunderbolt, USB 3 and HDMI and simply replace them all with two or three USB C ports. Update: Thunderbolt can now be integrated with the USB-C port.

Less radical would be to retain one or more legacy ports while introducing a couple of USB C ports. Either way, it’s a certainly there will be at least one or two of them. Question three and perhaps most important: will one of them be used for power, replacing MagSafe?

I think so, yes. In taking that step with the 12-inch MacBook, Apple has demonstrated a willingness to move on from MagSafe. The company has never been afraid to leave legacy technology behind: it was one of the first companies to drop optical drives, Steve Jobs famously refused to allow Flash on iPads (a technology the rest of the world is starting to drop only now) and it was one of the first to switch from spinning metal disks to SSD.

Dropping MagSafe is a bigger deal, I know. It’s been a headline feature of MacBooks for almost a decade, and it’s a much-loved one. But Apple isn’t afraid to leave behind its own technology as well as technology borrowed from others.

FireWire was developed by Apple, and was enormously popular with AV professionals, many of whom still use it today. But Apple decided that Thunderbolt was the new FireWire, and dropped it. In the new MacBook, Apple has decided that USB C is not just the new Thunderbolt (a standard that never took off in quite the way that either Apple or Intel had hoped), it’s also the new MagSafe.

I think the decision is made: MagSafe is dead, long live USB C. 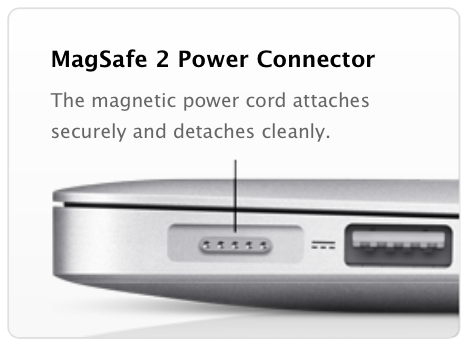 I have to admit, that thought makes me sad. I’m a huge fan of MagSafe. As I wrote before:

I love MagSafe. Not just because it has saved me from an expensive MacBook nose-dive on more than one occasion, but also because it’s so damn easy to use—none of the fiddling around with the power lead you get with lesser laptops. Just hold the connector somewhere near the right spot and it snaps into place.

MacWorld did some very impressive number-crunching on just how big a deal MagSafe is compared to USB C. It’s the kind of in-depth look at the issue that really appeals to the geek in me, and I thoroughly recommend it if the physics of laptop disasters is your kind of thing.

I’d hoped that Apple might introduce a MagSafe adapter for the USB C connector in the power supply, perhaps at the power brick end, but nope. MagSafe is gone.

But MacWorld‘s physics calculations aside, how big a deal would the loss of MagSafe be in the real world? Our own Seth Weintraub made a specific point about the new MacBook:

And perhaps the MacBook Air is not long for this world, set to be replaced by the new MacBook once Apple can produce a model at a price that caters for entry-level buyers. But a MacBook Pro without MagSafe could potentially get expensive if a single incident of tripping over a power cable sees it come crashing to the floor.

There is, though, a counterargument to this: battery-life. Back in the days when a MacBook was good for 2-3 hours’ real-world battery-life, they spent a lot of their time plugged in while we were using them. These days, not so much. With 8-12 hours’ claimed life, and 5-6 hours of real-life use, I don’t even bother carrying my power brick when I’m out & about with my MacBook Air, and the same would be true if I were using the latest MacBook Pro instead of my 17-incher.

At home, the pattern seen with many users is to leave it plugged in out of the way (where the power lead can be safely routed so no-one trips over it), then unplug it in order to use it.

So really, the main time today’s MacBooks are actually being used while they are connected to power is while sat at our desk. And that’s another situation where we can route the power lead safely away from becoming a trip hazard.

In which case, perhaps MagSafe is yesterday’s solution to yesterday’s problem? And dropping it from future MacBooks is not, despite the physics, that big a deal?

As ever, take our poll and let us know your views in the comments.