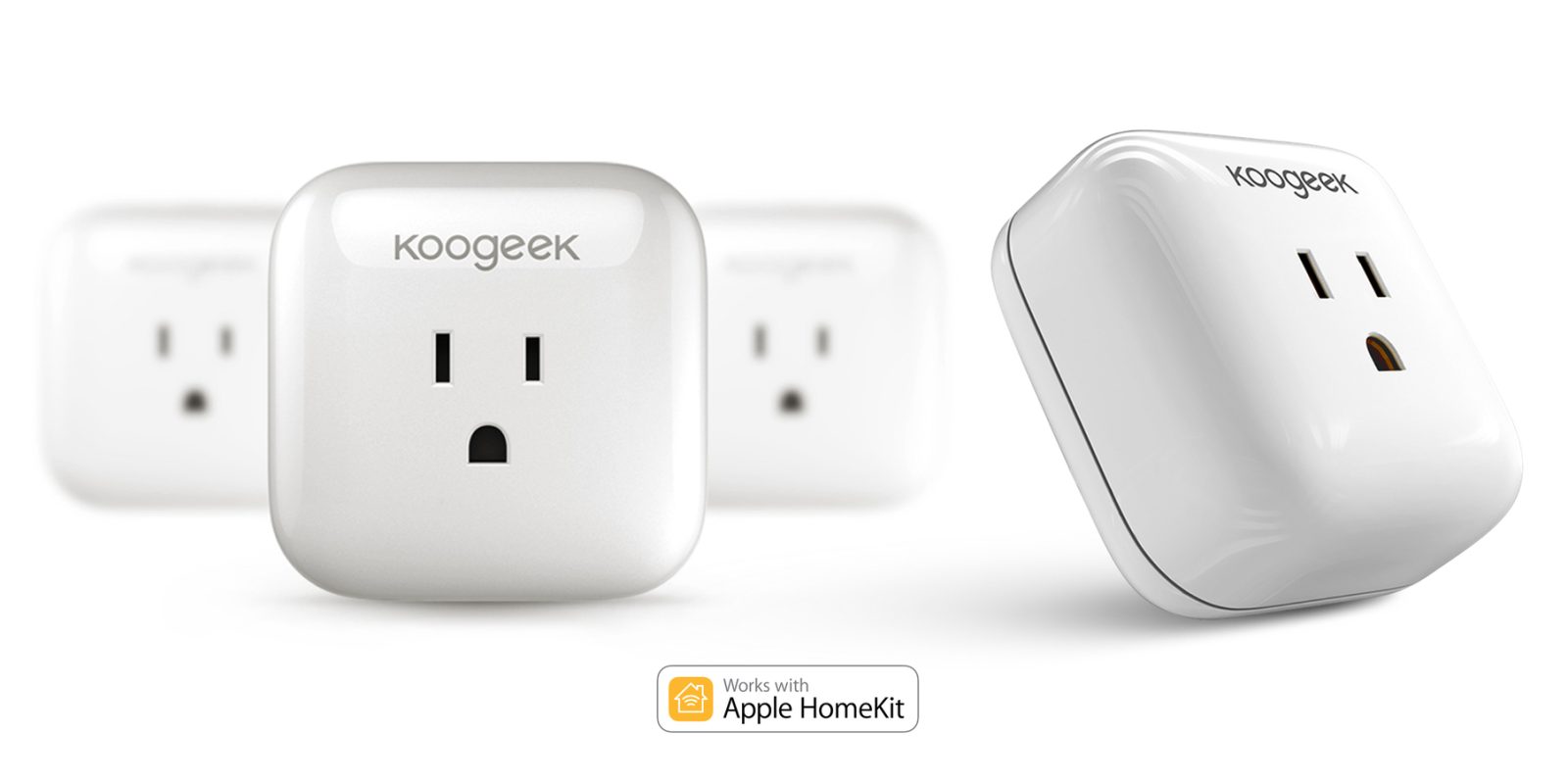 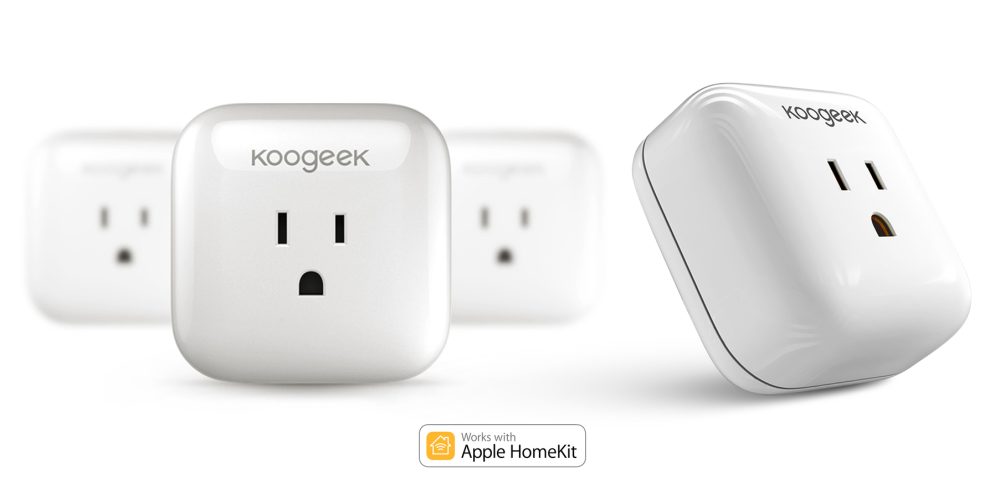 The Koogeek plug is a simple way to add smart HomeKit functionality to ‘any’ device you own with a plug (buy it for $34.99). The idea of a HomeKit plug outlet is by no means new — there are plenty available on the market — but the Koogeek stood out for its simplicity, form factor and WiFi connectivity (see below for full review of how to set it up and how well it works).

It also works flawlessly with the iOS 10 Home app which means the switch can be controlled via Siri or via the Control Center pane. There are some caveats to be aware of, but it’s a simple, straightforward and inexpensive HomeKit smart plug option …

Unlike many HomeKit plugs, the Koogeek connects to the network using 2.4GHz WiFi. If my various experiences with HomeKit items has taught me one lesson, it’s that WiFi HomeKit stuff is far superior to Bluetooth ones and a lot of the cheaper HomeKit plug devices communicate, sadly, on Bluetooth. I also like how compact the unit is: it’s a very small rectangle with rounded edges that is only slightly larger than a normal power adaptor.

The box includes the plug adaptor itself and an instruction sheet to tell you what to do. Physically installing the adaptor is easy; just plug it into the wall socket and then plug whatever ‘dumb’ home gadget you want into it. The Koogeek can power accessories up to 2KW which means things like fans, lights, coffee machines and kettles will all work. Big electronics products and appliances like electric radiators will usually exceed the 2KW constraint and are therefore not compatible.

To continue the installation, it’s time to move to the software side. The instruction booklet recommends downloading the Koogeek Home app and following the steps. With iOS 10 now prevalent, I feel like this is a little outdated as its much easier and simpler to use the Home app — which is exactly what I did. Just open Home, tap Add Accessory and switch on the power to the wall outlet.

Almost instantly, the Koogeek will show up on screen. Then, you just have to do the usual pairing process of holding up the HomeKit sticker to the camera (the company includes three stickers so you don’t have a chance of losing it, one on the device itself, one on the instruction sheet and one on the inner packaging) so the iPhone reads the unique number and completes the authentication.

By default, the device will show up as a generic on/off outlet. The Home app lets you give it a name and select a more appropriate category for the common cases where you are using the smart-plug to control a lamp or fan. In my case, I chose Light. This means Home applies the appropriate visual style to the representative item. For a light, this means iconography of a bulb glowing or not. Picking Fan causes the blade to animate in a circle when the Koogeek is in the ‘on’ state.

And that’s pretty much it. You can now use the Koogeek like any other HomeKit accessory. Toggle it on or off with a tap, change the room it is in, add it to a scene and control it with your voice using Siri. I just say ‘Turn on the lamp in the Cabin’ to my phone and — boom — it works. If you have a fourth-generation Apple TV, you can use the unit as part of your home automation actions. Third-generation or fourth-generation Apple TV owners can activate Remote Access to control the outlet away from home.

The Koogeek uses WiFi and it is very reliable, responding to my taps to turn it on and off in less than a second — wherever I am in the house. The small hitch is that its radio is 2.4GHz only: if you have a 5GHz-only router, then this accessory won’t work at all as it won’t be able to connect to the network. This shortcoming is mitigated by the fact 5 GHz only network configurations are really quite rare as most people have routers that operate solely on the 2.4 GHz band or work across both in a dual spectrum 2.4/5GHz mode. 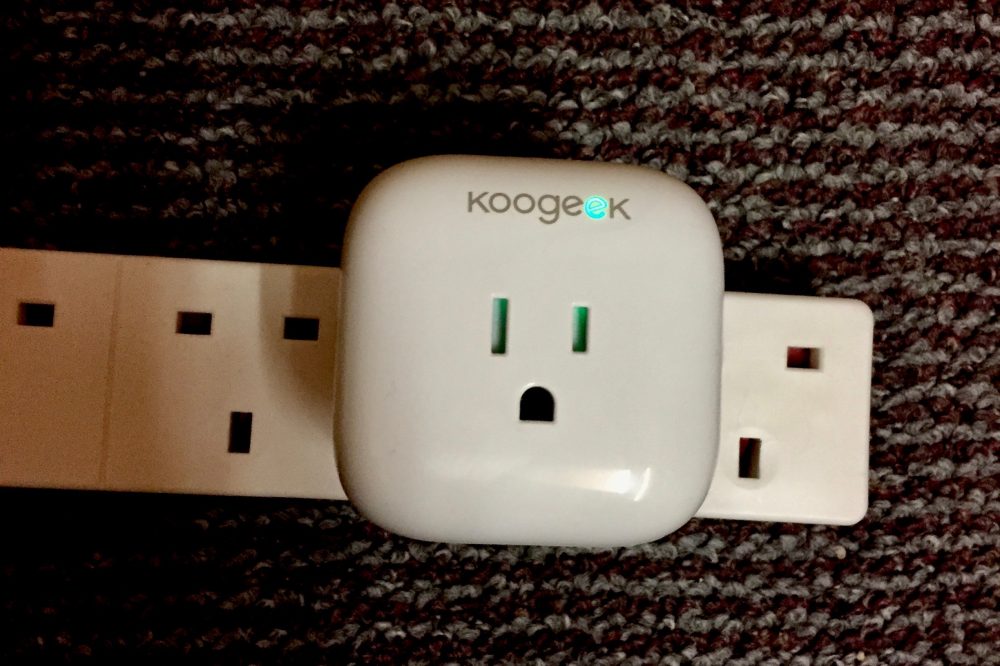 The ‘e’ in Koogeek logo lights up green when the socket has been switched on. I wish I could turn this LED off entirely (a permanent green indicator is redundant) but it is small and subtle. By the way, if you are physically at the socket, there’s a button on the unit itself to toggle the on/off state manually.

As I mentioned before, the company want you to use the Koogeek Home app. For pretty much everyone, I would recommend ignoring this advice and using the iOS 10 Apple Home app as it features a better, simpler, UI. There is one feature of the Koogeek that can only be accessed using their app however: Daily Power Consumption. 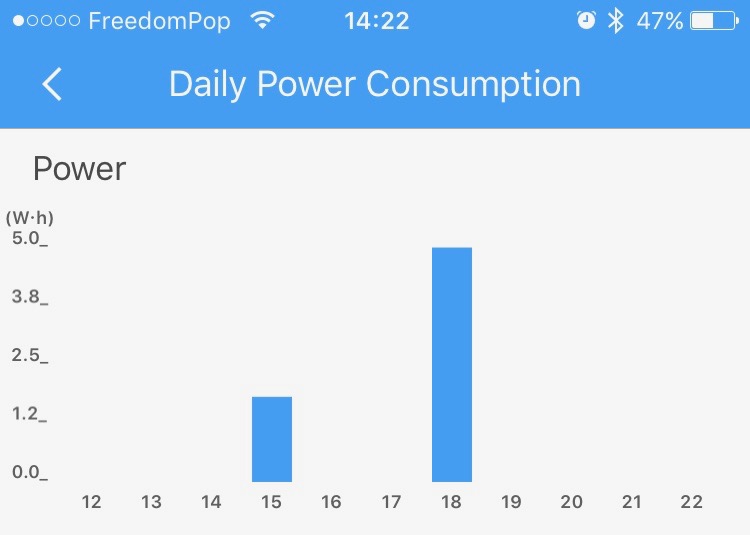 You can chart how much energy the accessory is using and on what days, as well as compare watt hour usage across months. I’m not sure how useful this is — I can’t see a need to track my energy personally – but it’s there. The Koogeek app is mediocre (small touch targets, inconsistent buttons) but it really doesn’t matter on iOS 10 as the Apple Home app comprehensively steps up to the plate.

Simple, straightforward and inexpensive. If you are looking for a HomeKit plug, the Koogeek is a great option that does the job well and has no significant downsides. It could make for a great holiday gift too, for anyone who is an iPhone user that isn’t already invested in the HomeKit smart home experience. Right now, it’s only available in the US with US power sockets for $34.99. Hopefully, the company will branch out with native international offerings soon. More information about Koogeek can be found on their website.