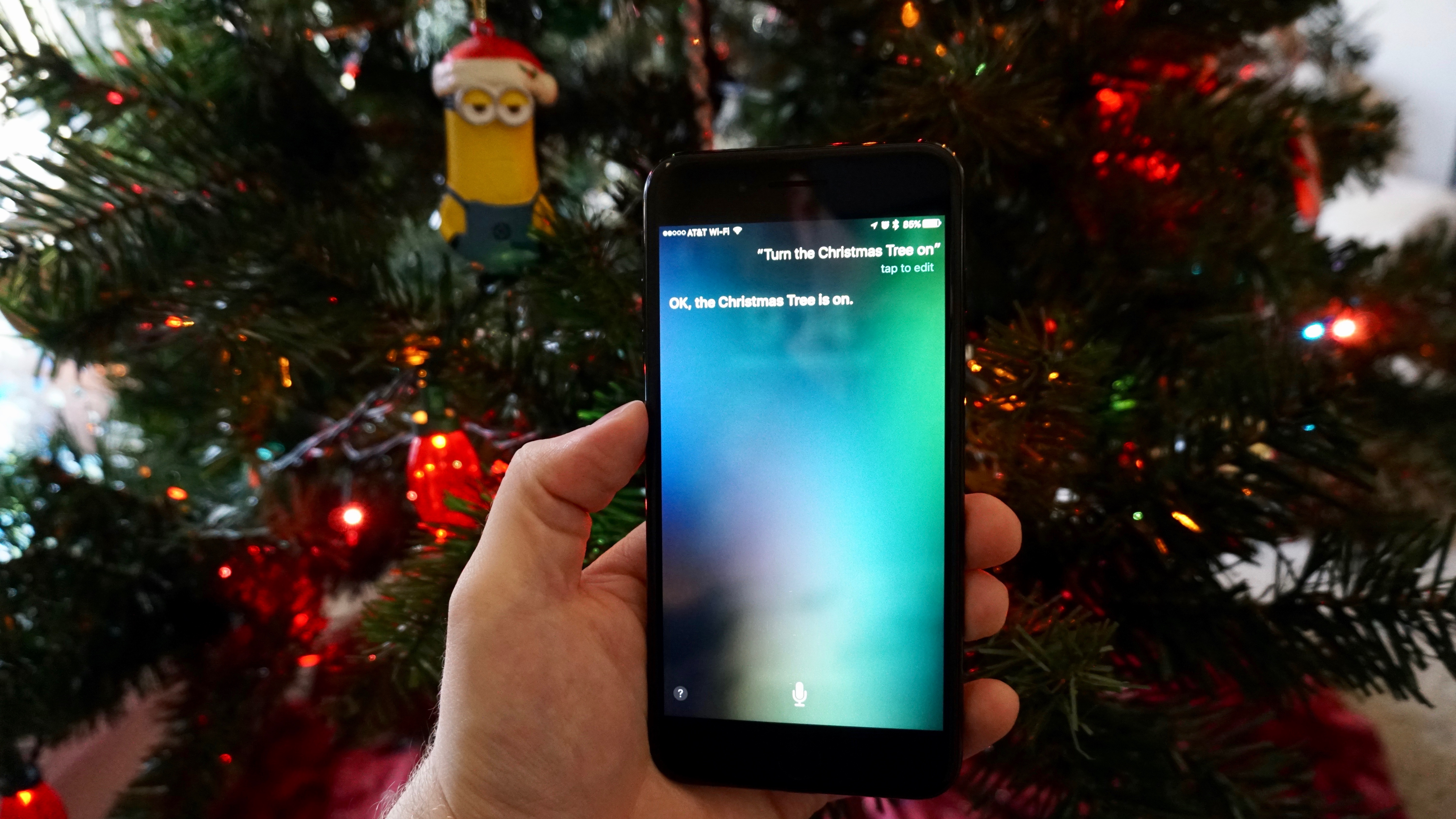 Apple’s HomeKit feature makes automating and remotely controlling your holiday lights super simple, and iOS 10’s new Home app makes setting it all up this year easier than ever before. With one or two affordable accessories and an iPhone or iPad, you can put HomeKit and Siri to work and forget about fiddly timers or unplugging and plugging lights back in for a month.

For best results, make sure you’re updated to iOS 10 on your iPhone, iPad, or iPod touch so you have access to Apple’s new Home app for managing HomeKit. You also need a fourth-generation Apple TV to enable automation. Below are a few resources for making sure you’re using iOS 10 and getting familiar with the Home app:

Next, you need a HomeKit-compatible smart plug. These plug into your wall outlet, then your lights plug into these outlets which in turn makes them HomeKit-compatible. The trick is to name the accessory with something like ‘holiday lights’ or ‘Christmas tree’ so Siri knows which plug connects to which lights or inflatables. I have a few recommendations for which smart plugs to buy: 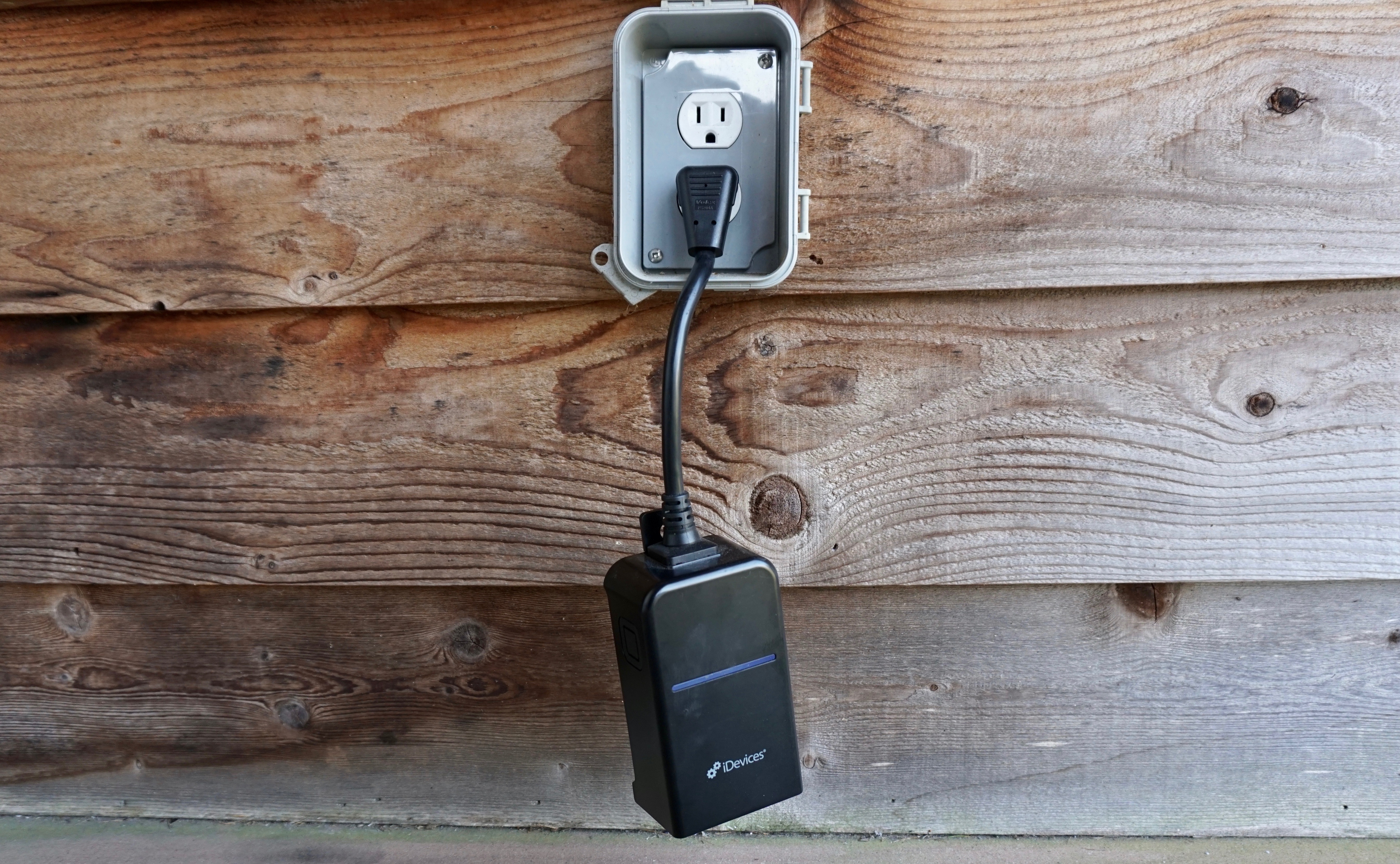 For outdoor lights and inflatables, the solution comes down to one product: iDevices Outdoor Switch. This HomeKit-compatible black box is built for use outside including during rain, features two hood-protected outlets for plugging in accessories, and has a button on the side for manually toggling power. You can also mount Outdoor Switch for extra security.

I first used Outdoor Switch this year with Halloween lights and inflatables back in October, and I’m bringing it back out for my Christmas lights and inflatables. In my case, I plug in two extension cords that run down and under the porch steps then connects to multiple strands of lights with one inflatable (a Santa Clause and a Minion) at each end.

One downside is that you can’t independently control each plug-in; the Home app sees Outdoor Switch as one item despite having two connectors. The primary plug is also fairly large so it can be difficult to connect in outlet boxes like mine above without a little pressure. 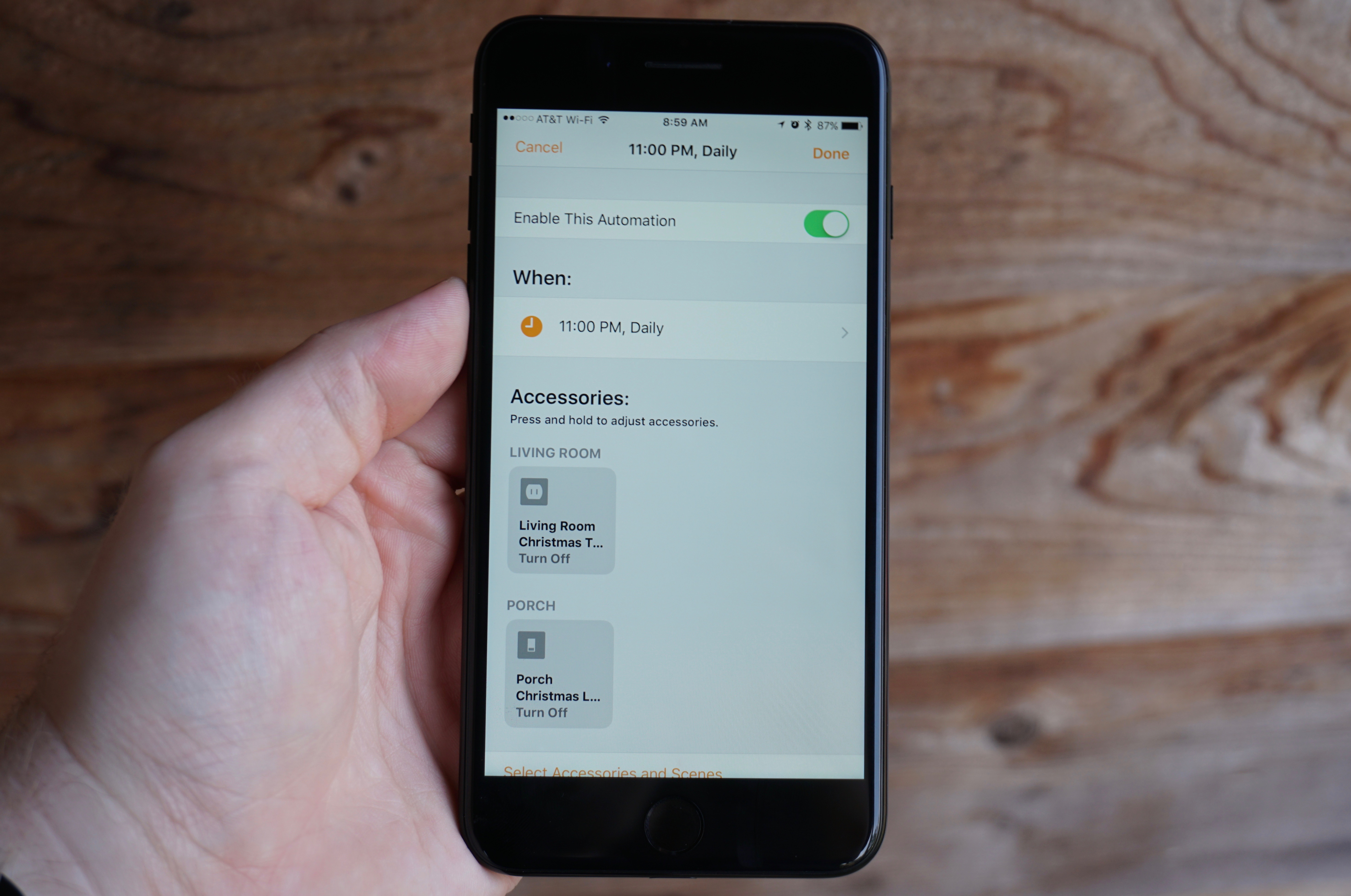 Back over on the Home app’s automation tab, you can add automations that turn Outdoor Switch on at sunset and off at 11 pm or whenever you decide. This keeps your lights from running all month long while ensuring they’re lit at night without you having to manually connect and disconnect them.

After the holiday when your lights come down, you can put Outdoor Switch to use outside or inside to control another accessory too. iDevices Outdoor Switch is available for $79.99 from Amazon and Best Buy. 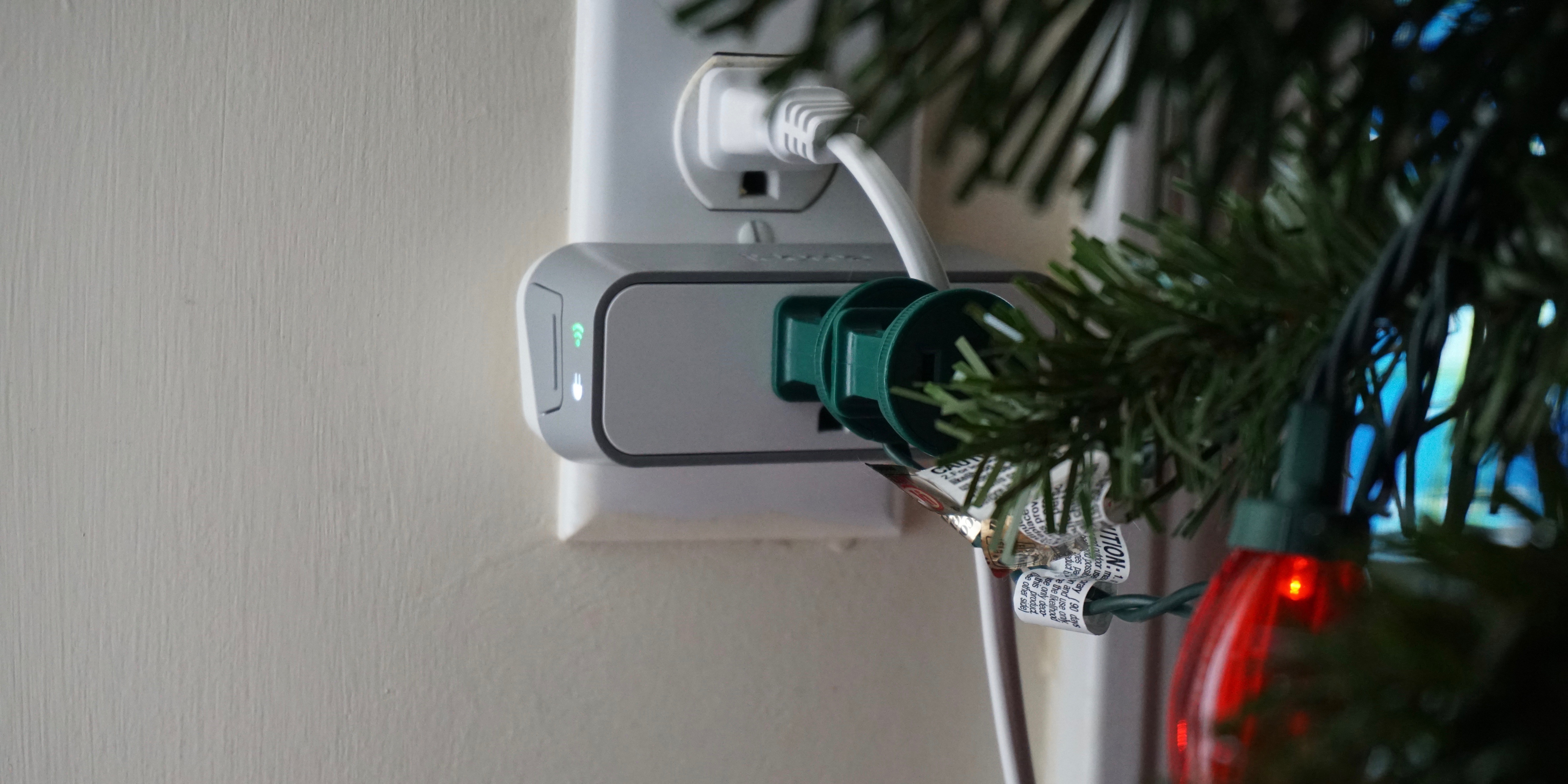 While recommending a single solution for outdoor lights is easy, there are a lot more options when you head inside. My personal favorite is the iHome iSP6 SmartPlug. It relies on Wi-Fi, not Bluetooth, which I find more reliable and responsive when controlling with Siri or Apple’s Home app, and it’s design is relatively neutral for a smart home accessory.

SmartPlug lets you connect a single three-pronged plug and features a manual power toggle button on its side. Two status indicators dimly light up the side: one for Wi-Fi connection and one for indicating active power.

Although SmartPlug only features a single outlet, you can use one unit for your entire Christmas tree when connecting multiple strands of lights together.

Using Apple’s Home app on iOS 10, my tree is set to light up at 5 am each morning and turn off at 11 pm each night. You could also pick triggers like location or sunrise and sunset if you wanted to be more creative.

Using HomeKit to control this automation is way more convenient than a timer that requires being connected at a certain time of day to set the time for lights out, and you have a free HomeKit plug after the holiday to put to use elsewhere. 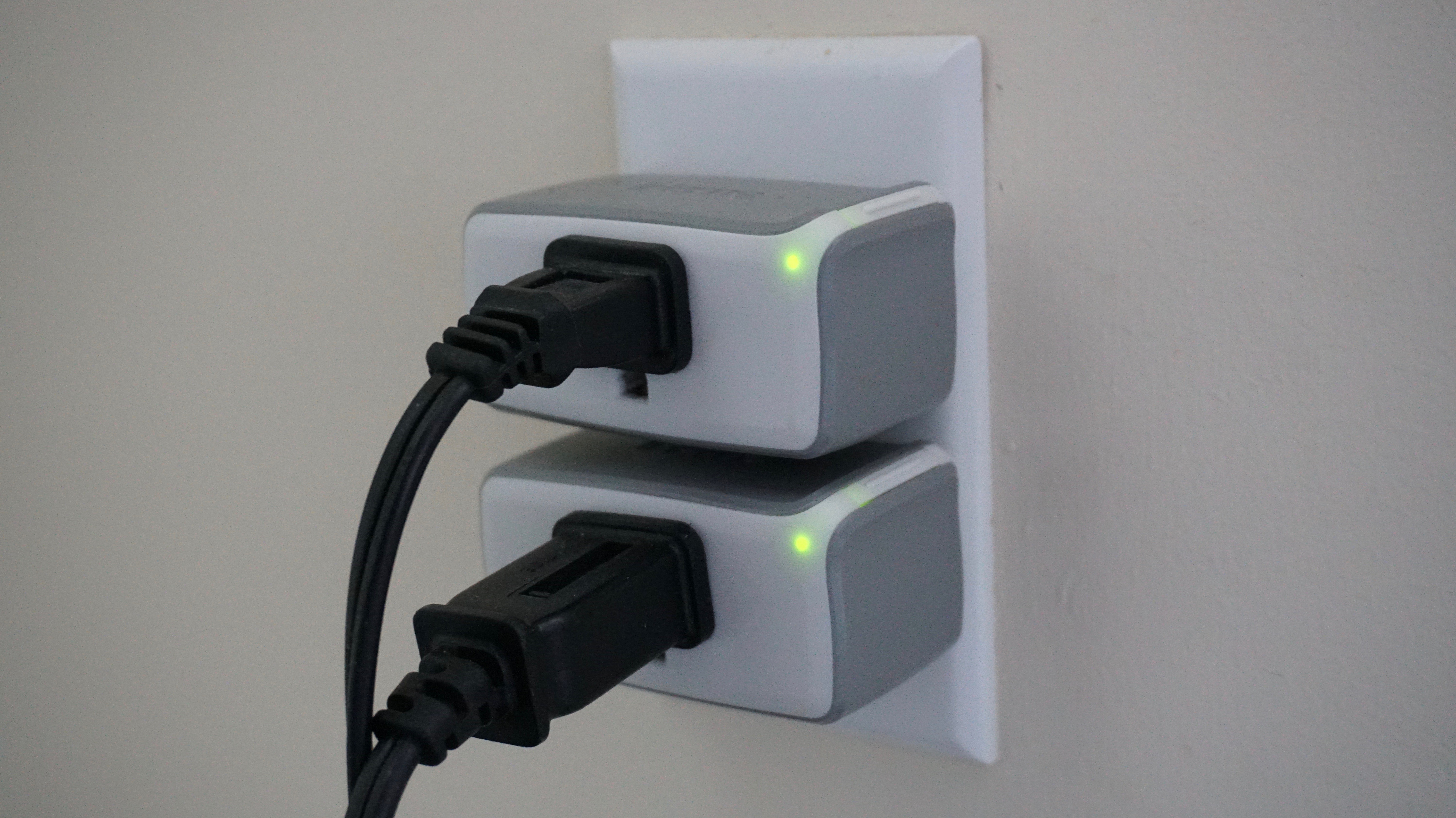 An older version of iHome SmartPlug with model version iSP5 that’s being phased out also exists and works effectively the same but with a slightly different design. I use two of these in my office for controlling power to a fan and a lamp. If you find this model for cheaper than iSP6 or easier to pick up in stores, there’s absolutely nothing wrong with it in terms of usability and reliability.

iHome iSP6 SmartPlug is available for $39.99 from Amazon and Best Buy.

Two other HomeKit plug options that I’ve tested include iDevices Switch (the indoor version) and Eve Energy. Eve relies on Bluetooth which can be a little slower than Wi-Fi when using HomeKit while Switch has more features than I need from a plug but neither are deal breakers.

iDevices Switch features one three-prong outlet, a side button for manually toggling power, and an LED strip that acts as a night light. You can turn the night light off completely (which I do) or control it independently in Apple’s Home app just like you would with a connected light bulb. It’s a pretty cool addition if you need it. iDevices Switch retails for $49.95.

Elgato Eve Energy is a bit bulkier but seems to handle higher power devices (like my elliptical) better than iHome SmartPlug. You get a single three-prong outlet and a combo power toggle/LED status light.

Eve Energy’s special feature is the ability to offer insights into power consumption using Elgato’s mobile app if that appeals to you; iHome makes a version of its SmartPlug called iSP8 that also features power metering which doesn’t affect HomeKit. Elgato Eve Energy retails for $49.95. 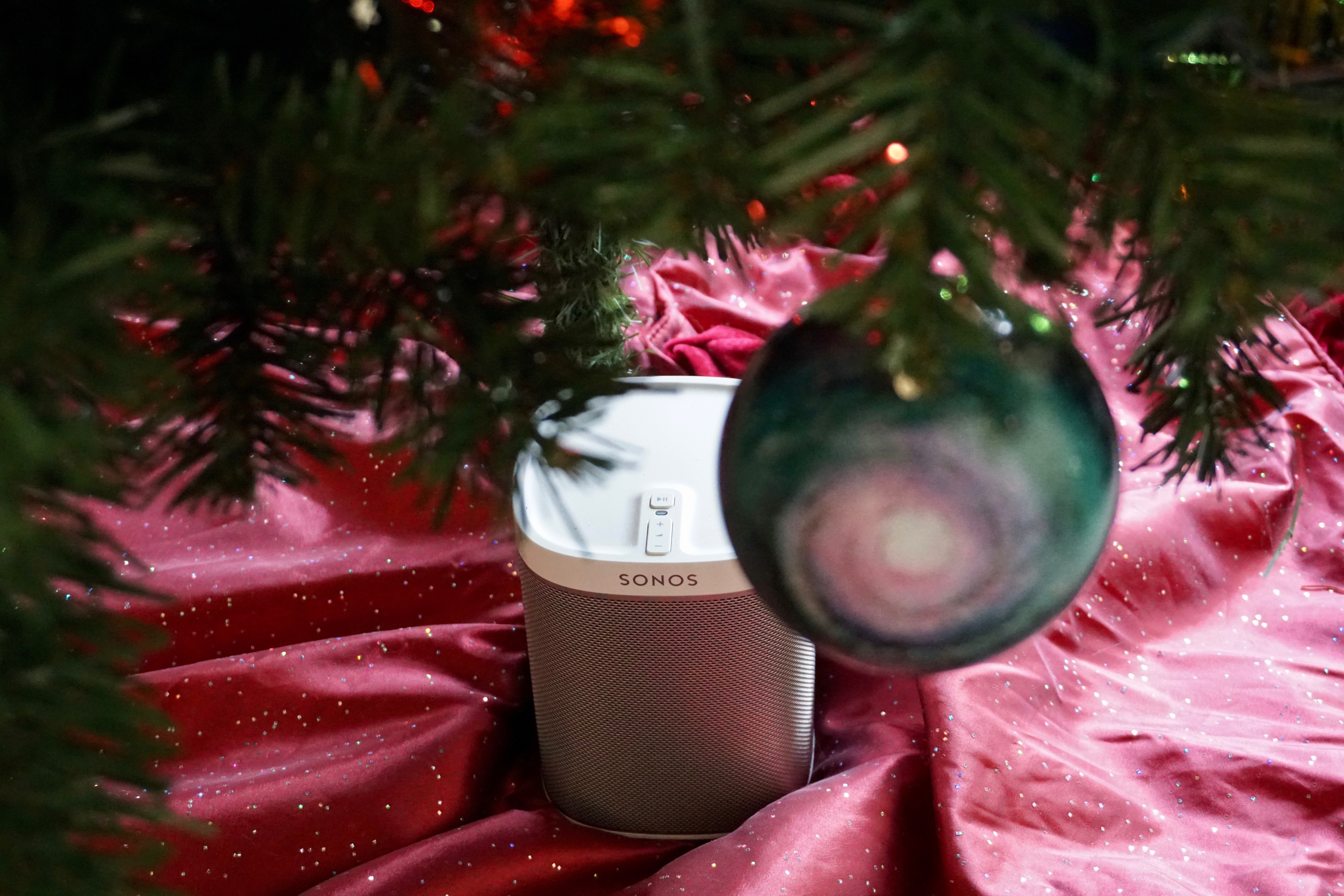 Sonos doesn’t have any HomeKit tie-in, but the wireless speaker system does work with Apple Music and can be automated to sync with your holiday lights and create an impressive festive scene.

I place a Sonos Play:1 under my Christmas tree and play holiday playlists from Apple Music during December. The music is controlled from your iPhone, iPad, or Mac and plays directly over the Internet from Apple Music to the speaker.

Wrapped presents will soon hide the speaker completely, and a Sonos feature called Trueplay tunes the speaker to sound excellent despite its less-than-ideal placement sound-wise.

The best part is when friends and family don’t realize where the music is coming from … does your tree play holiday music?

In terms of automation, you can set Sonos speakers to play specific albums, playlists, or radio stations at a certain time for a set duration. This means you could have HomeKit turn your lights on at 5 am and have Sonos start playing your preferred station from Apple Music at the same time.

I don’t go that far all month, but maybe closer to Christmas Day…

Hopefully this helps you use HomeKit to control and automate your holiday lights, then after the holiday you can find new uses for those smart plugs in January! 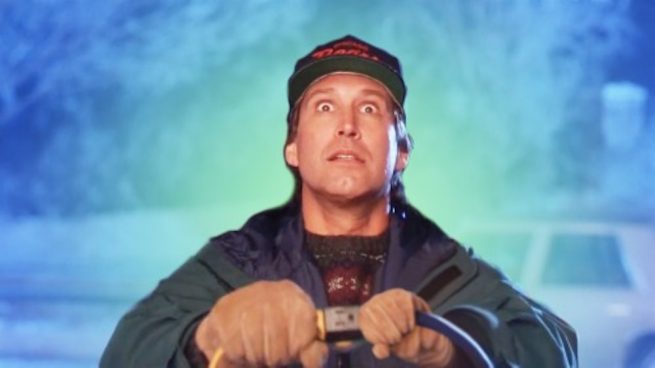