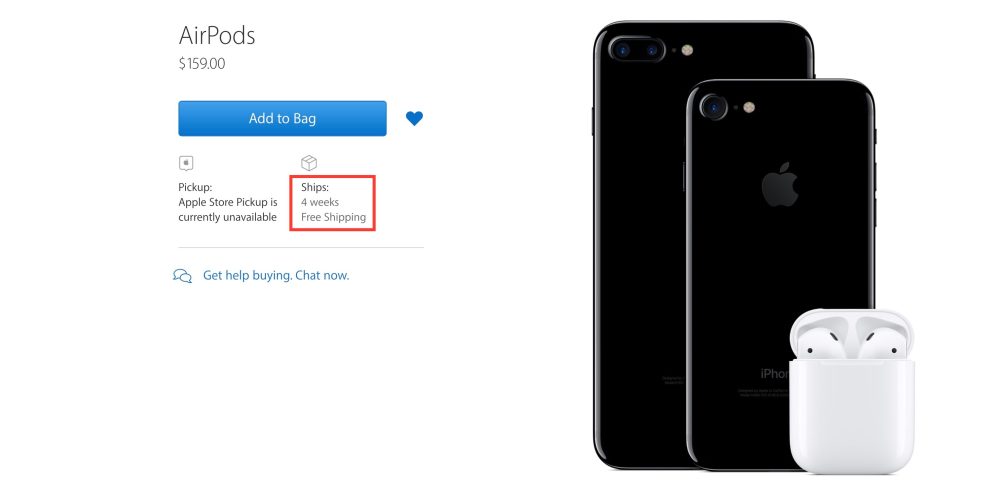 [UPDATE: One day layer, AirPods are now estimated to ship in 6 weeks. Resellers and retail stores may be your best bet.]

After being delayed for just over a month, Apple’s new AirPods became available to purchase for the first time today with deliveries estimated for as early as Monday. Customers who didn’t order during the initial hour likely won’t see AirPods until 2017 as shipping estimates have already climbed to 4 weeks out. You still may be able to purchase a pair before next year though…

If you missed out on early orders, you may try your luck at a retail store next week. Apple says its new AirPods will be “arriving at Apple Stores, Apple Authorized Resellers and select carriers next week.” No specifics on actual availability have been released yet however.

AirPods will be shipping in limited quantities at launch and customers are encouraged to check online for updates on availability and estimated delivery dates. Stores will receive regular AirPod shipments. AirPods are available in more than 100 countries and territories including Australia, Canada, China, Hong Kong, France, Germany, India, Mexico, Netherlands, Japan, UAE, the UK and the US.

While AirPods will be launching next week, Apple’s other new earphones called BeatsX have officially been delayed until February after initially being promised by the end of the year.