As noted by MacRumors, the gifted t-shirt is gray in color and depicts two circles. Look closer, however, and you’ll see that the circles are made up of a text list of all of Apple’s retail locations around the world.

Of note, the t-shirt gifted to Apple retail employees in similar in style to that of one sold at the company’s campus store in Cupertino. As you can see in our walkthrough of that store from October, Apple sells a shirt with a similar design, but that shirt instead lists all of the company’s products within the circle opposed to retail stores like the gifted shirt. Apple sells the product shirt in its company store for $29.

The other aspect of this year’s gift is a printed copy of Apple’s credo. The text is printed on a heavy card stock and is six paragraphs long. The credo is the same as what Apple introduced back in August, written in a poetic style and focusing on the company’s goal of enriching lives. 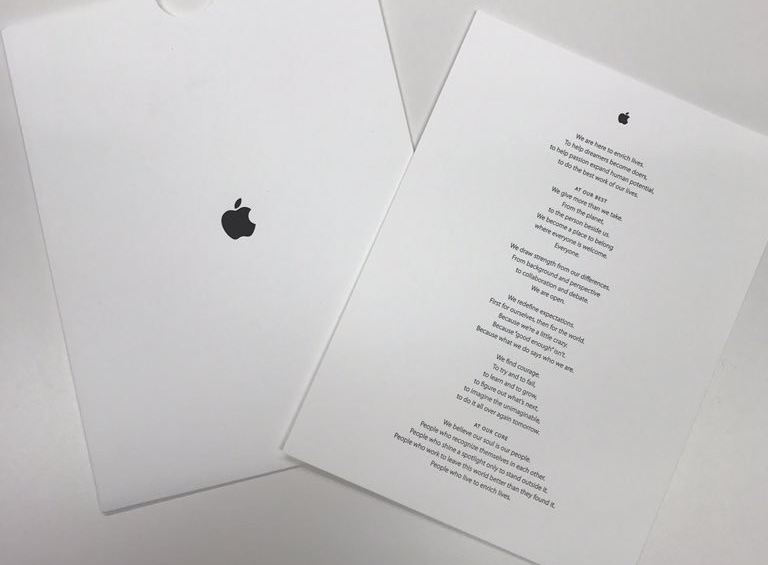 We are here to enrich lives. To help dreamers become doers, to help passion expand human potential, to do the best work of our lives.

We give more than we take. From the planet, to the person beside us. We become a place to belong where everyone is welcome.

Everyone. We draw strength from our differences. From background and perspective to collaboration and debate. We are open.

We redefine expectations. First for ourselves, then for the world. Because we’re a little crazy. Because “good enough” isn’t. Because what we do says who we are.

We find courage. To try and to fail, to learn and to grow, to figure out what’s next, to imagine the unimaginable, to do it all over again tomorrow.

We believe our soul is our people. People who recognize themselves in each other.People who shine a spotlight only to stand outside it. People who work to leave this world better than they found it. People who live to enrich lives.

This year’s retail gift isn’t quite as impressive as last year’s, when the company gifted employees a pair of urBeats earbuds and a 9-month subscription to Apple Music. The year before that, Apple gifted retail employees an Incase Staple backpack.

While this year’s gifts might be less impressive from a monetary standpoint, Apple fans will likely appreciate the limited edition t-shirt, even though it resembles one sold in its corporate store.