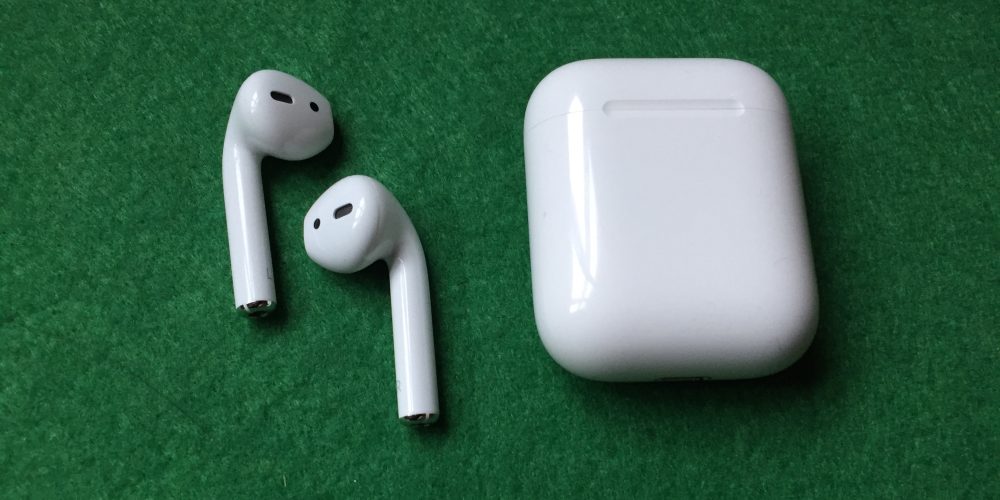 I’ve been looking forward to using Apple’s wireless earbuds, AirPods, ever since they were teased at the iPhone 7 event. They gripped me as something that is quintessentially Apple; a streamlining of earbuds as far as they can go, headphones stripped to the bare essentials.

I just got my new Apple AirPods delivered this morning and I’m happy to say they seem to be living up to my expectations a few hours in. Here’s my first impressions ..

They use the W1 chip for instant pairing, 5 hour battery life (with 24 hours of juice in the case), and smart features like seamless switching between devices and auto-pause when the AirPods detect they have been removed from your ear.

I ordered mine when they went on sale last week and they arrived this morning (UK time). I’ve collated some initial impressions below — note that full reviews will come later after days of real-world usage. 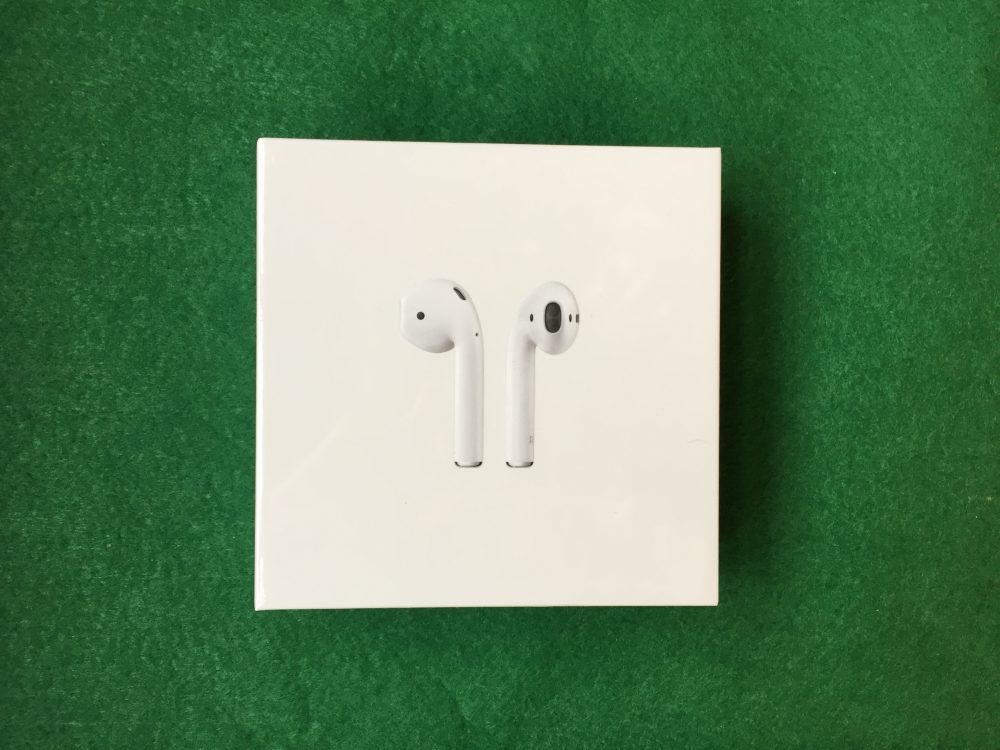 The AirPods come in this small little square box no larger than my handspan. After removing the cover plastic, I noticed the front image of the AirPods is actually embossed slightly so your fingers can feel the raised surface. It’s a nice touch and adds a premium feeling to the accessory before I saw the contents. The text on the side also uses bold print in reflective silver ink; I greatly prefer this era of Apple packaging font-faces more than the razor-thin Helvetica and blank boxes the company dabbled with after iOS 7. 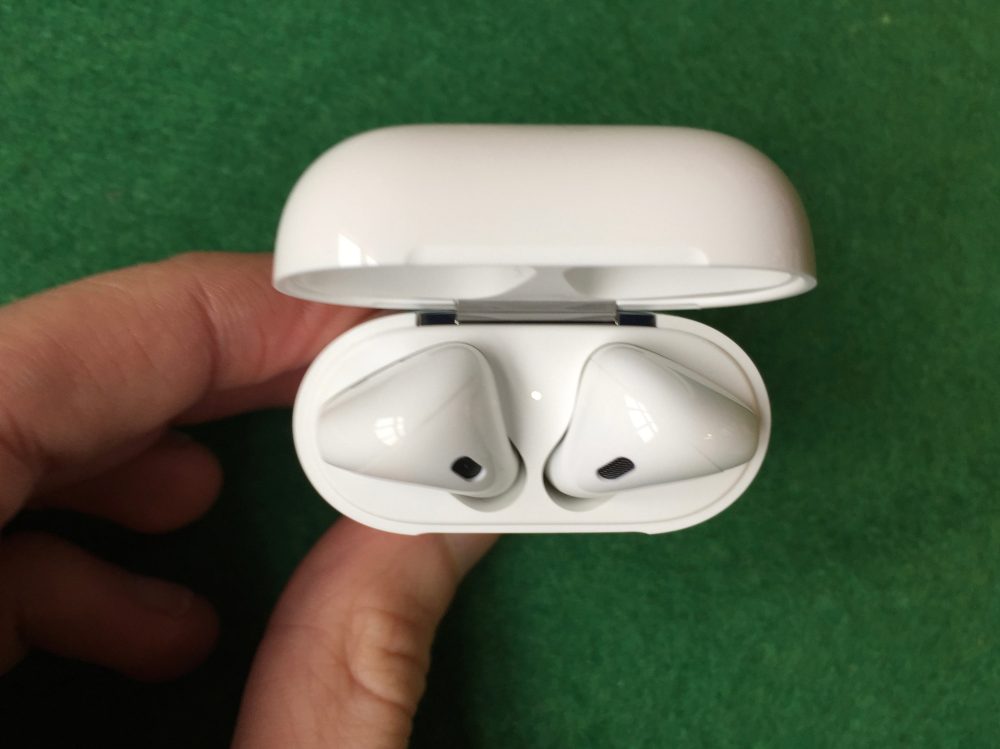 Removing the box lid reveals the AirPods, or really the case with the earbuds inside. The case is smaller than I expected; it’s like a rounded pebble made of plastic. It fits well inside my hand and is very pocketable. I’ve seen the case compared to a pack of mints before but this is inaccurate in my view; it is more bulbous than a box of tic-tacs. The glossy finish is nice — although I’d expect it to get nicked and dirty with time.

Apple has clearly spent a long time with the AirPods Case hinge. It snaps open and shut with the lightest touch. The AirPods are magnetically attached inside the case so you get a great popping feeling when you take them out or drop them back inside. Magnets and automatic features are certainly the theme of this product and it all contributes to making it feel magical — in an ideal world, the AirPods shouldn’t feel like a technology product at all. If you stare closely into the case’s earbud cavity, you can see the metal orange contacts where the AirPods get their power from, one of the few places the illusion of the self-working futuristic object is compromised. 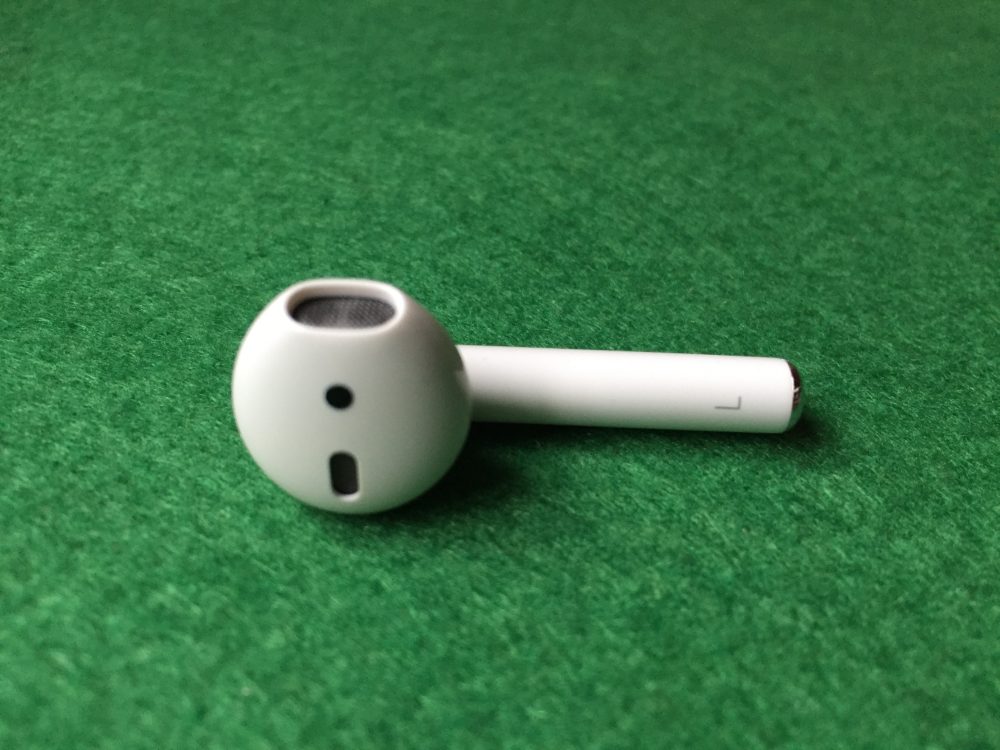 The AirPods earbuds themselves do not have orange contacts; the bottom of the AirPods have a metal ring around the base. The AirPods are so ‘ordinary’ they really do look like EarPods with the wires cut; the technology is very well hidden. They are very light, I would wager lighter than a pair of EarPods. I don’t know if this is actually the case but it highlights how removing the wire actually changes the frame of reference significantly.

My impression of how it feels to have two wireless earbuds in your ears is not as alien as some of the other people I’ve seen who have AirPods. To me, it’s exactly what I expected EarPods without dangling wires to feel like. I don’t want to speak for comfort, I think that will vary a lot from person to person, as I never had an issue with EarPods. There is a sensation that they are going to fall out at the slightest shake but they never do.

I’ve been fulfilling my role as reviewer in my office to verify how secure they are; headbanging, running on the spot, jumping up and down. I can’t get them to fall out of my ears. The AirPods barely move even when I’m vigorously shaking my head from side-to-side. Gravity pulls them around my outer ear as I tilt my head, still they do not actually come out even at 90 degree angles. I have no desire to buy AirPods clips or cable attachments, as the fit is fine for me.

Pairing AirPods And First Use

As instructed by the pamphlet, I cracked the case open a couple of centimetres away from the iPhone and the AirPods pairing panel appeared onscreen like other W1-equipped headphones. (The AirPods graphic is a revolving animation, super slick onboarding experience). One tap on the Connect button and they were done; I pressed play in Music and the songs started playing in my ears.

Out of the box, I was interested to see that the batteries for each of the AirPods items, the two earbuds and the case, was dramatically different. One earbud was at 70%, the other was at 47% and the case was two-thirds full. This isn’t a criticism — it was just funny to see. Depending on context, the Batteries widget will report different AirPods battery life statistics; it can show percentages for the buds, the case or all three at once depending on the circumstances. (The AirPods come with a Lightning <-> USB-A cable in the box, somewhat amusing given the product pushes forward to ditch the 3.5mm headphone jack but doesn’t promote adoption of USB-C.)

One thing I wasn’t expecting is that when AirPods connects to a device, the earbuds emit this ‘bonk’ sound. I don’t really understand why this is necessary and I find the chime unpleasant. If I could, I would opt to turn off this sound. 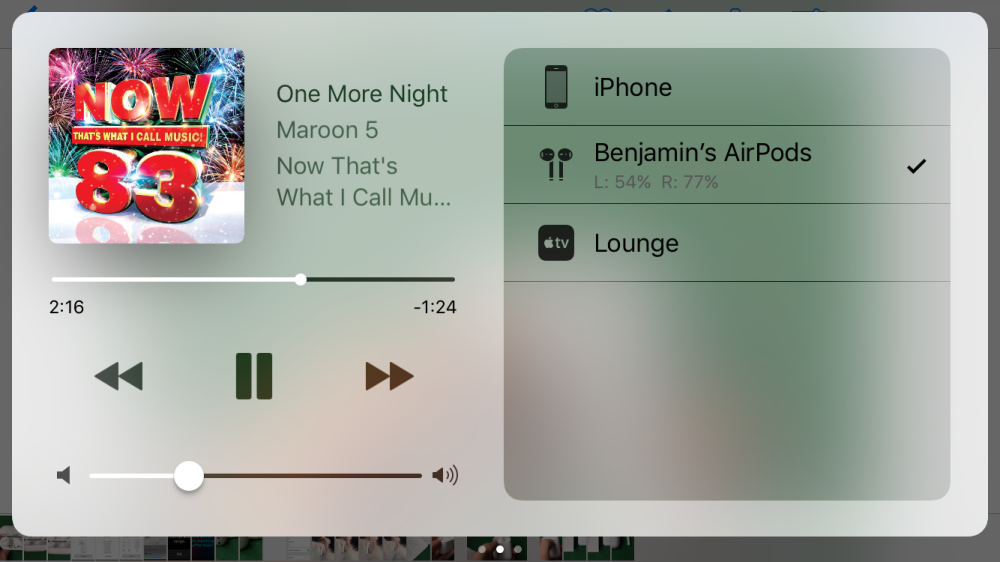 As advertised, switching between audio from my iPhone and my Apple Watch was instant. Listening with AirPods on the Mac was a bit iffy; the AirPods don’t appear in the audio menu immediately so there’s an inherent delay to simply select them. The connection takes multiple seconds to get started too, so it takes 5-10 seconds to move from AirPods music on the iPhone to music on the Mac. iPad took a similar amount of time. Ongoing reliability is something to watch for so I’ll likely do a follow-up review in a couple weeks.

The pause feature, where music is stopped when you remove a bud from the ear, is fantastic. I’ve pulled them out about ten times today and every time, consistently, the music pauses after a beat. Putting them back in, another second wait and then the music resumes. 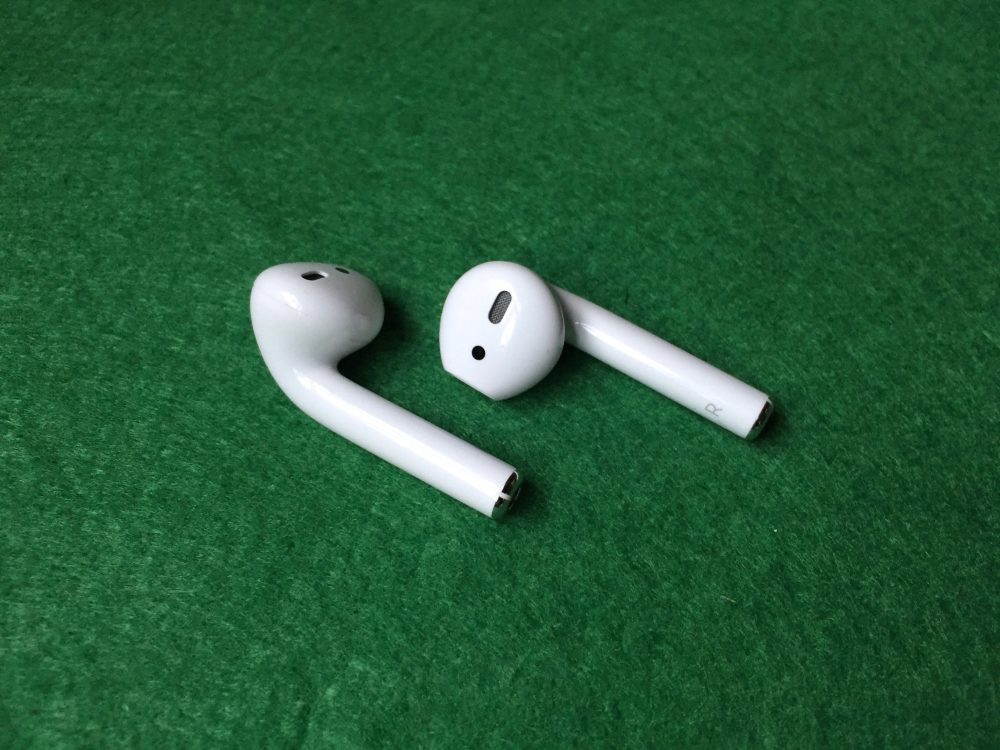 These are better than EarPods for sound quality. The music is fuller, bass is recognisable (rather than non-existent), and the audio seems ‘closer’ to my ear than EarPods. Sound clarity is superior at higher volumes too. If you want raw audio quality, then AirPods are never going to be for you — consider instead Apple’s other W1 headphones or go upmarket to prosumer gear. I am pleasantly surprised with their performance though; they may look like EarPods but they do sound substantially improved.

The latency between pressing play and hearing music is slight, not immediate but responsive enough for audio. The lag persists when watching video, which means the lips of people talking do not match up 1:1 with the sound. The video latency appears to vary on an app-by-app basis but even Apple’s apps aren’t perfect on this. This seems like something software could resolve (delay displaying video frames to account for Bluetooth lag). 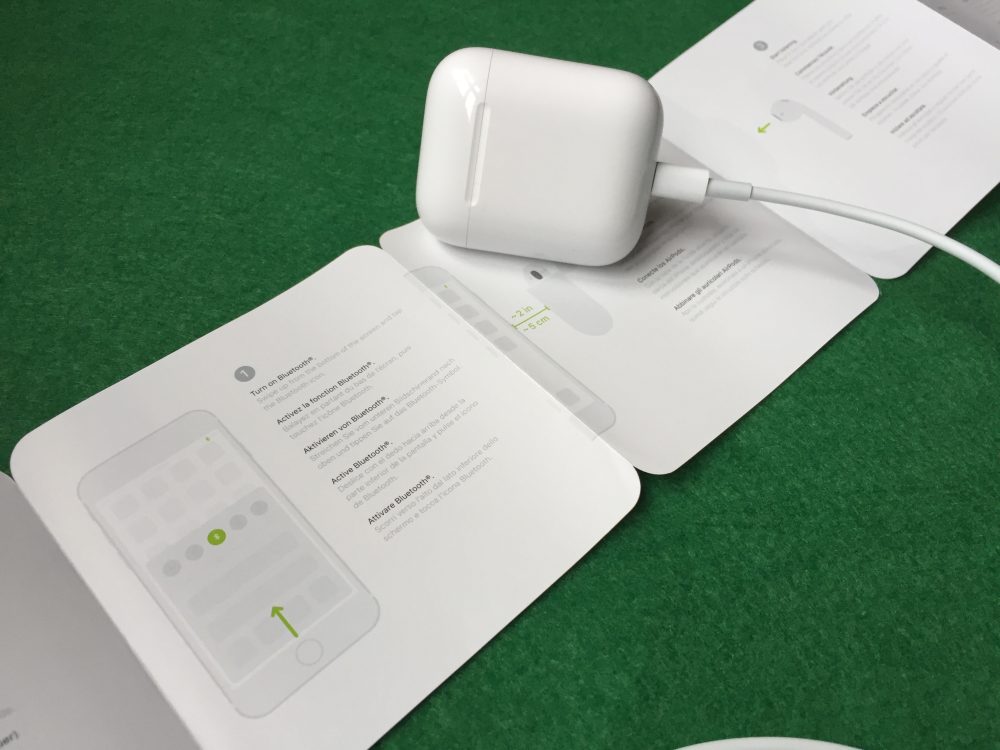 I struggled to do the double-tap gesture to activate Siri at first. It turns out I was tapping too lightly. You actually have to press firmly above the stalk — almost pushing the buds further into your ears. When you get the necessary force, the gesture was consistent.

Microphone quality is still mediocre for anything but phone calls and Siri; the sound recorded from the AirPods for a quick Voice Memo was a little crackly and distorted. It seems perfectly good for its intended use, Siri, though. Siri could dictate my words and provide answers as well as an iPhone mic (whether Siri understands what you mean is a different story). I didn’t get a chance to test in a noisy environment just yet.

If you don’t like using Siri, iPhone Settings let you change the gesture to a simple Play/Pause. I like Apple’s voice assistant but I still might change this option in the future; automatic pause is good but I think there will be enough occasions where I want to quickly stop music without taking the earbuds out. The AirPods settings also includes an option to disable the automatic pause feature if it gets annoying. 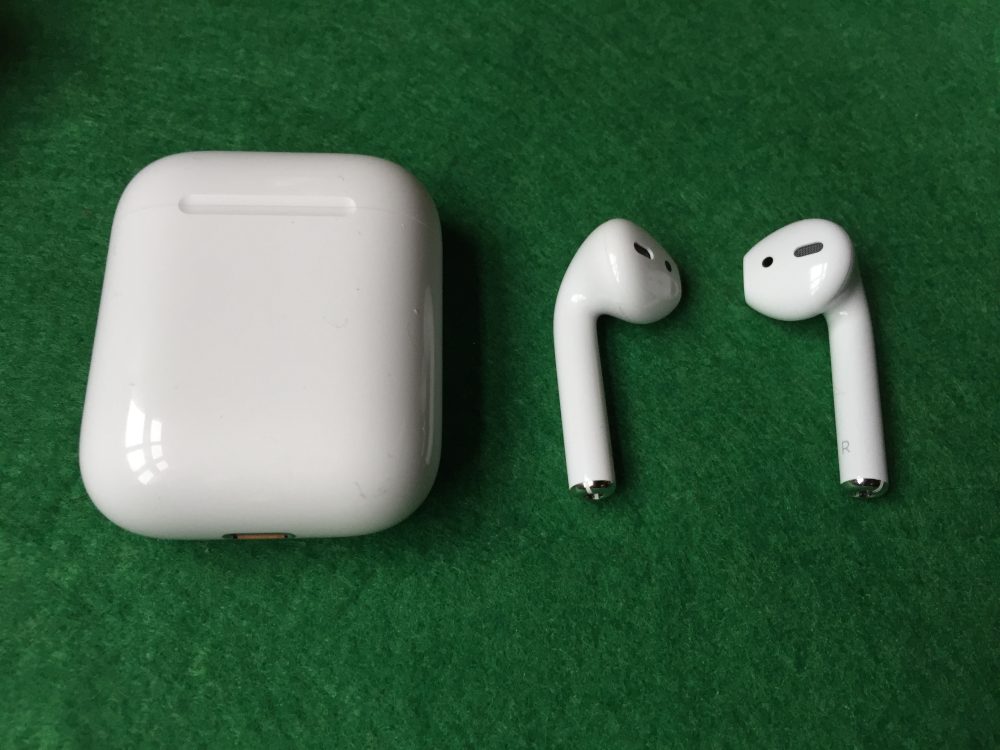 I’m really happy with my AirPods, although hands-on for a few hours is very different to a conclusive opinion on their utility. Battery life is yet to be tested, as is performance in other conditions where Bluetooth can sometime struggle. I also wish that switching playback from iPhone to Mac was faster; perhaps Apple can improve this latency in software updates.

AirPods are great, though, and I wouldn’t hesitate to pick up a pair for a Christmas gift — if you can find them. In a couple of years, once Apple can get the price down,  AirPods are going to be bundled with every iPhone — rather than EarPods — and Apple’s vision for wireless music will be cohesive.

AirPods are available from Apple, Best Buy and other retailers around the world for $159 — although stock is low domestically and internationally. If you got your AirPods today, let us know what you think in the comments.