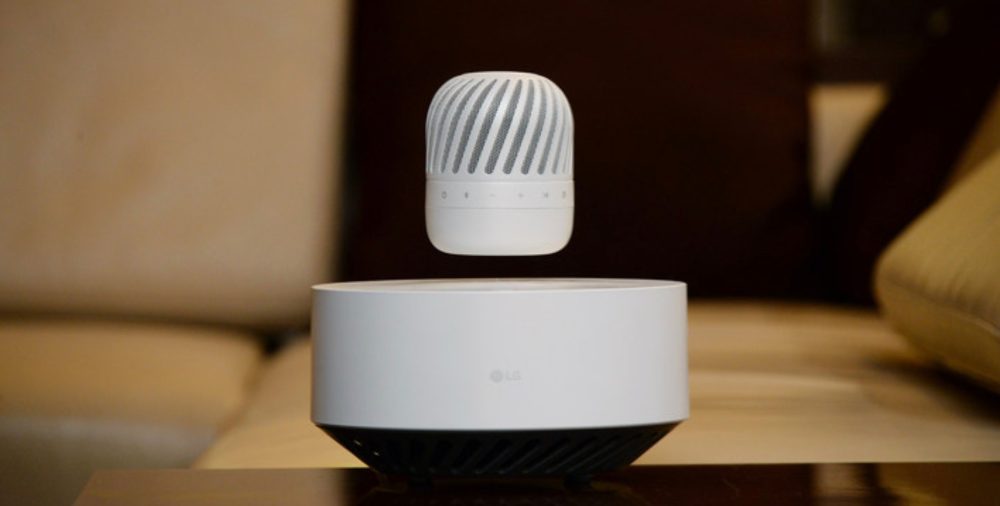 CES 2017 officially kicks off next week, but like a lot of manufacturers, LG is trying to get a head start by teasing some of the new products it has planned. In a press release this evening, LG announced a new Bluetooth speaker that “hovers in midair,” according to the company…

LG explains that it’s new PJ9 Bluetooth speaker features floating capabilities thanks to its accompanying Levitation Station. The company says that powerful electromagnets in the Levitation Station allow for the appearance of the PJ9 speaker to be floating in mid-air.

Leveraging powerful electromagnets housed within the Levitation Station, the PJ9 achieves a stunning visual effect of floating in mid-air, untouched by any surface or wires.

As you can see in the image above, the speaker really does appear to be floating. The PJ9 features a 360 degree omnidirectional speaker design, which lends itself to a sound feature “deep bass, flush mid-range tones, and crisp highs.”

Perhaps what’s most impressive about this speaker setup is that when the PJ9’s battery starts to run low, it will automatically descend towards the Levitation Station and charge instantly. There’s no user interaction required. LG says the PJ9 should achieve around 10 hours of battery life per charge.

When the PJ9’s 10-hour batter begins to run low, the smart portable speaker automatically descends to the Levitation Station and begins to charge wirelessly with no intervention required from the listener and no interruption in music playback.

Furthermore, the design of the speaker is IPX7 compliant, so it can withstand immersion in water up to 1 meter for 30 minutes, so the speaker is useful both indoors and outdoors. The PJ9 features standard Bluetooth connectivity with Multipoint technology, meaning it can be connected to two Bluetooth devices simultaneously.

At this point, there’s no word on a release date or pricing for the PJ9 and its Levitation Station. It’s always interesting around CES season to see which products actually come to market and which don’t, so we’ll have to wait and see what category LG’s new levitating speaker falls into.

Nevertheless, we’ll try and get some hands on time with the LG PJ9 and its Levitation Base at CES next week. The full press release is below:

SEOUL, Dec. 27, 2016 ― LG Electronics (LG) is showcasing its futuristic Levitating Portable Speaker (model PJ9) at CES 2017, the proving ground for exciting technology from across the electronics industry. The mesmerizing wireless speaker hovers in place over the accompanying Levitation Station to deliver high-quality audio while making quite an impression with its eye-catching design. In addition to its striking looks, the versatile speaker gives users the ability to seamlessly play music, podcasts and other audio content in the home as well as outdoors.

The PJ9 creates its stunning visual effect using powerful electromagnets housed inside the Levitation Station to give the speaker its unique trait of being untouched by any surface or wires when playing. At the core is a 360-degree omnidirectional speaker with turbine blade-inspired design and deep bass courtesy of the subwoofer embedded inside the Levitation Station. The PJ9 also features Dual Passive Radiator technology to reproduce flush mid-range tones and crisp highs.

When its 10-hour battery begins to run low, the smart portable speaker automatically descends to the Levitation Station and begins to charge wirelessly with no intervention from the listener and no interruption in the music. The PJ9 is IPX7 compliant in order to withstand any adverse weather condition when being used outdoors. For added convenience and versatility, Multipoint technology enables the speaker to connect to two Bluetooth devices simultaneously.

“Our latest addition to our growing lineup of premium wireless audio devices is not only eye-catching but also communicates the message that LG is serious about bringing something different to the table,” said Brian Kwon, president and CEO of LG’s Home Entertainment Company. “We are absolutely dedicated to exploring new concepts and to pioneering innovative designs for its advanced audio products for consumers around the world, and the PJ9 is the latest example of this commitment.”

Visitors to CES are encouraged to come to LG’s stand at the Las Vegas Convention Center (Booth #11100, Central Hall) to see the company’s full lineup of wireless audio products.