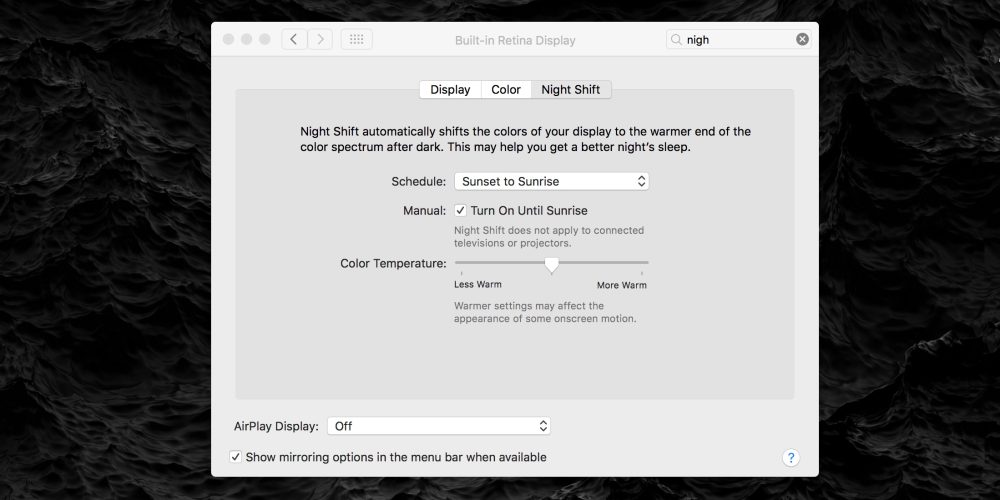 Apple has just released beta 1 of macOS Sierra 10.12.4 and it comes with one particular headline feature, it brings the same Night Shift feature seen on iOS to the Mac for the first time. This means Mac users can now set a schedule to have their display colors slowly shift hues over time, displaying less blue light as night time approaches. Night Shift on Mac changes the colors of the integrated Retina Display on a MacBook as well as any connected external displays.

Night Shift automatically adjust the hue of the colors on the screen corresponding to the time of day. The idea is that by transitioning from a blue light glare to a softer yellow display, it makes it easier for your eyes and may help you sleep better. Using the automatic schedule, the display will return to its normal colors by the morning.

macOS 10.12.4 includes many new features. Here’s what we’ve found — let us know in the comments if you spot anything else.

Night Shift is a popular feature on iPhones and iPads to reduce eye strain, and was introduced almost a year-to-the-day with iOS 9.3. Apple is finally making its debut on the Mac with this version of Sierra.

To use Night Shift on the Mac, open System Preferences and go to Displays. Night Shift is the third tab, and features much of the same options you are used to from iOS. Set a custom schedule or use the automatic timings based of sunset and sunrise.

On iOS, settings for Night Shift reside in the Settings app with a quick toggle accessible from Control Center. On the Mac, settings live in a Displays preference pane in System Preferences — Notification Center now includes a quick toggle to activate or deactivate manually.

Developers can test out the Night Shift feature right now; a date for public release is not yet known.

We are installing macOS 10.12.4 right now and will update if we notice any other new features. Along with the new developer beta for Macs, Apple has also seeded the first beta of iOS 10.3 for iPhone, iPad and iPod touch.