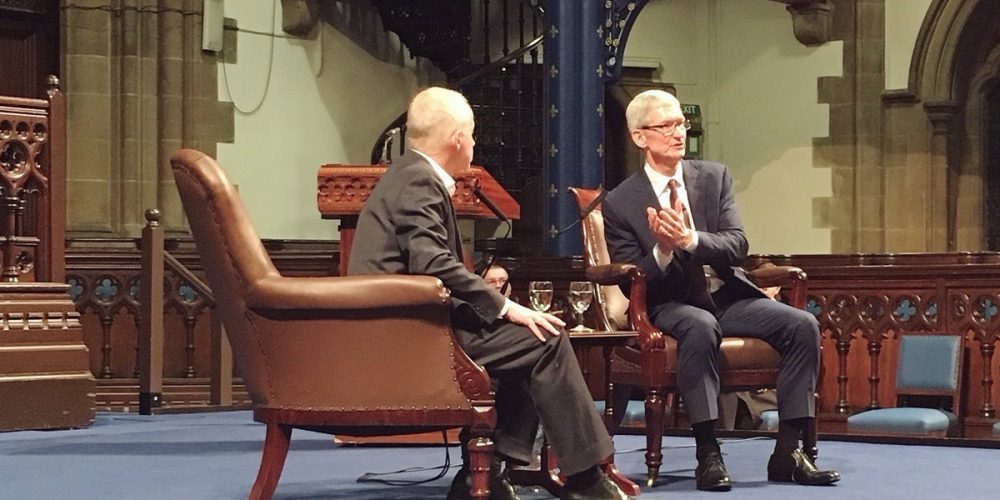 Update: A full video of Cook’s appearance at the University of Glasgow can be seen below. It’s not great quality, but it’s something.

Apple CEO Tim Cook today received an honorary degree from the University of Glasgow, in the UK. The ceremony (video below) was then followed by a brief interview where Cook described the institution as ‘one of the finest universities in the world’. He also condemned the Donald Trump immigration order, saying that ‘if we stand and say nothing, we become a part of it’.

Watch Tim Cook receive his degree after the jump as well as his answers to questions about coding in school, Steve Jobs, Apple’s role in activism and more …

In the fireside chat, Cook said that aspiring graduates should not work with the aim of making money: ‘it will wear out fast, or never be enough’. Cook also said that there is a big difference between loving the work and doing the work, as advice he would give to his younger self.

Regarding the Trump order blanket-banning immigration from seven Muslim countries, Cook said that Apple thrives on diversity and that doing nothing was not an option. Cook plainly said: ‘I do not support the immigration ban’.

In the Q&A, one student asked Cook if he could have a job. Cook directed the person to the company jobs site. Regarding activism, Cook said he does not view Apple as an ‘activist’ per se. He says Apple makes its voice heard in areas where they have deep knowledge or a strong point view based on things Apple learned, not a general purpose professional activist.

Cook also repeated his comments about the importance of coding as a skill, saying it should be required in schools. He also said that Steve Jobs was the person that influenced him the most in life ‘by far’.

The university is posting photos and videos from the event to its Twitter feed.

.@tim_cook looked up to and was inspired by Steve Jobs. pic.twitter.com/TGMwtmvBZh

.@tim_cook is officially an honorary grad! Does this mean we all need to switch to @Apple? 😋 pic.twitter.com/v89lJydDCH

Before Cook arrived at the university, he visited the Glasgow Apple Store where he took selfies with customers.

Tim Cook stops for selfies as he leaves @Apple store in Glasgow ahead of collecting an honorary degree from @UofGlasgow pic.twitter.com/PT8ffykHwP

Humbled & honored to become part of the @UofGlasgow community tonight. Thank you to the faculty & students of this great university! pic.twitter.com/YpwArFUgGr