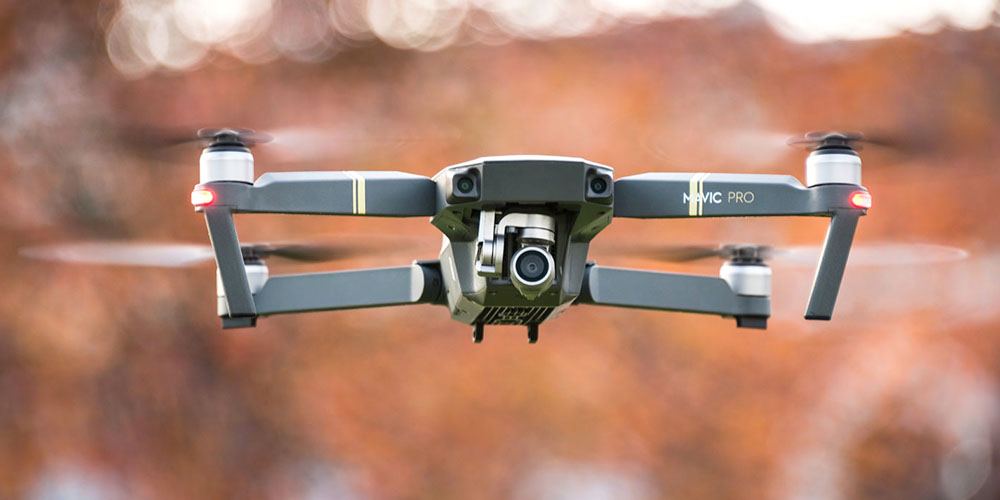 Flying a drone manually is fun, but there are some manoeuvres that are virtually impossible to fly smoothly. Circling an object or person, for example. You’d need to constantly change the balance of forward/backward and left/right inputs to fly the circle in the first place, then simultaneously keep rotating the camera by just the right amount to keep it pointed at the centre of the circle. Anyone who can do that perfectly is either a drone genius or has way more than the usual number of hands.

The DJI Go app offers a range of intelligent flight modes – aka autonomous flying. But a third-party app, Litchi, goes even further: it allows you to program your flight path in Google Earth before you even leave home. As soon as you arrive on site, just load the pre-programmed flight and hit Start.

I decided to give it a go with my ultraportable drone, the DJI Mavic Pro I reviewed last month …

The Litchi app offers five autonomous flying modes, four of which are aimed at video, so let’s start with a quick summary of each.

Orbit is the first one you see in the video below. You define a point (by default, the take-off point), and the drone will automatically fly in a circle around it, keeping the camera pointed towards the centre at all times. You can set the altitude, radius, speed, direction (clockwise or anti-clockwise) and a few other variables, and the app does the rest.

Track is also seen in the video. You draw a rectangle around a person or vehicle, and the drone will then follow the subject around, keeping the camera pointing toward them.

Focus is similar, but this time the drone lets you fly it manually while the app keeps the camera pointed at the subject. If you leave the drone hovering, Litchi will simply turn it to keep the camera on the subject.

Waypoint is the most sophisticated mode of all. Here, you can program the drone to fly a complete ‘mission’ – flying to a series of pre-selected points, and carrying out pre-programmed actions at each one. For example, you could tell it to fly around the irregular-shaped perimeter of your land, keeping the camera pointed at your house, starting video recording at the first point and stopping it at the last. Or you could instruct it to fly to say six different places, to point the camera at a different thing at each one, and take a photo of each.

There’s also a Pano mode to automatically take panoramic photos. Finally, if you use a virtual reality headset, there’s an FPV mode to provide you with a mock 3D first-person view.

One mode Litchi doesn’t offer in the iOS version is Follow-me – which follows the GPS location of a smartphone or tablet. This doesn’t need to be the one controlling the app, you can instead use a separate Litchi Magic Leash app and it will then follow someone else’s phone. This is currently an Android-only feature, but will hopefully come to the iOS version soon.

For an Orbit test, I took the drone to what seemed like a tailor-made location – a circular covered reservoir. This is a large area of grass surrounded by trees. My first orbit was around the edge of this.

But I quickly found that such a large radius is only really suitable for filming something large, like a castle. For people, you want to be very much closer, and pretty low to the ground. I then set the above Orbit profile: circling around myself and my partner, at altitude of 16 feet and a radius of 29 feet.

Speed is set in degrees per second, but the app helpfully shows how long it will take to complete a full circle at that speed, which is the far more useful reference point. In this case, 7 degrees per second means it will circle us in 45 seconds.

You also set the entry point to the circle (Nearest is safe, minimizing the likelihood of it encountering any obstacles along the way), the heading mode (where the camera is facing, in this example toward the centre) and direction (clockwise).

In theory, you can tell the app the subject height and it will automatically use the gimbal to angle the camera down to film that height. For example, 3 feet should angle it toward the centre of people. However, this was the only aspect that didn’t seem to work well, so I instead opted for manual control of the gimbal. You’ll see in the video that I take a few seconds at the start to angle the gimbal down toward us, but the app is doing everything else.

Gimbal control aside, I was incredibly impressed by the result. As I noted in the video, the centre point of the circle was the take-off point, not the actual position in which we’re standing, but the drone behaved beautifully – it followed a perfect circle, and kept the camera position absolutely spot-on. The resulting footage is completely smooth.

I also tested the Track feature to see whether it could follow Stephanie around the field. The key here is having a subject completely distinct from the foreground and background. In the first attempt, I managed to get between Stephanie and the drone. At that point, it locked onto me instead – not an unreasonable thing to do in the circumstances. When I got out of the way, it successfully tracked her for several minutes.

I only included a short clip of this in the video as it wasn’t a particularly interesting or challenging example, but I have a plan for that at a later date. 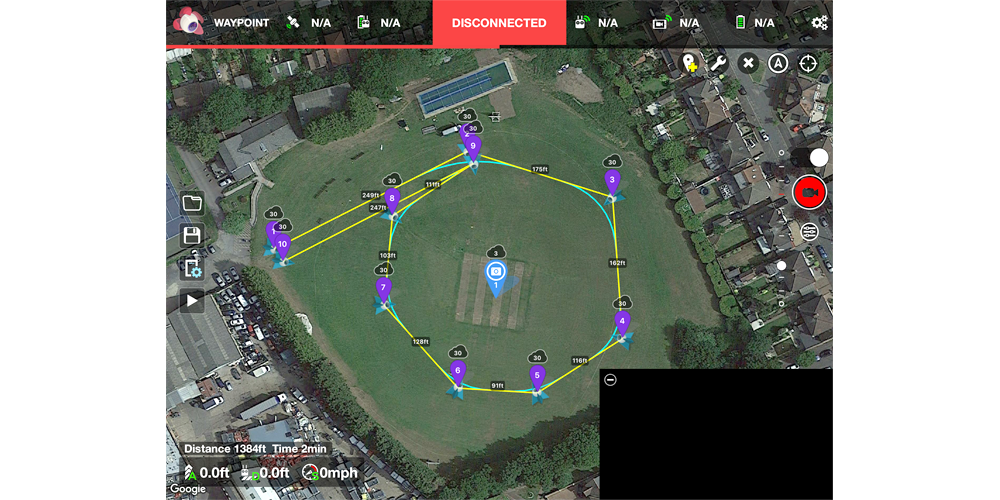 Rain stopped play before I could move onto a Waypoint mission, but I have created missions which I have stored in the app ready to try another time. Above is an extremely simple example of a mission where the drone climbs to 30 feet then flies around a cricket pitch, keeping the camera pointed at the pitch itself.

One very nice feature is that you can choose whether the drone flies exactly to each waypoint, or automatically smooths out the curves. In the cricket pitch example above, I created a total of 10 waypoints and selected the auto-smoothing feature, which turned it into more-or-less a circle.

Even better, you don’t even have to tap on the image to drop your waypoints: you can simple draw a line and Litchi will derive waypoints.

For example, you may remember the tumble-down castle tower in my first drone diary piece – its very first flight. I wanted to create a short clip where the drone would curve around the open side of the tower, keeping the camera pointed into it, to create a passing look at someone inside it. To do this, I just drew a curve on my iPad screen and the app automatically created five waypoints for it. 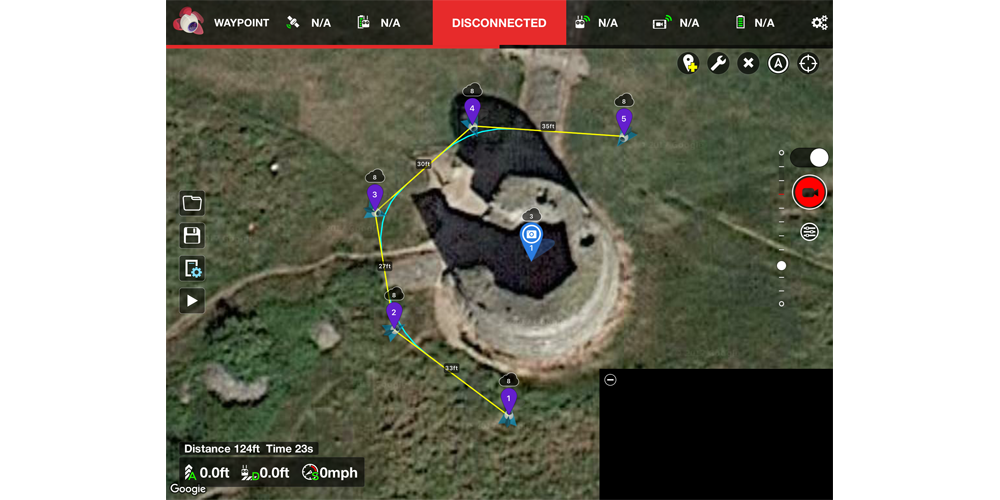 That’s for a project I have in mind, to feature in a future diary piece.

By iOS standards, Litchi is a pretty pricy app, costing $22.99 – especially given that some of its functionality is already available in the free DJI Go app.

But Litchi goes well beyond the modes offered by Go, and indeed replicates some of those previously found only in much more expensive apps aimed at professional drone use. And even for the overlapping features, the ability to create missions from the comfort of your own home, save them to your iPad and then load and run them once you’re on site makes the app worth every penny.

If you’ve already forked out a grand for the drone itself, twenty-three bucks more for an app that really lets you get the most from it seems like a sound investment.